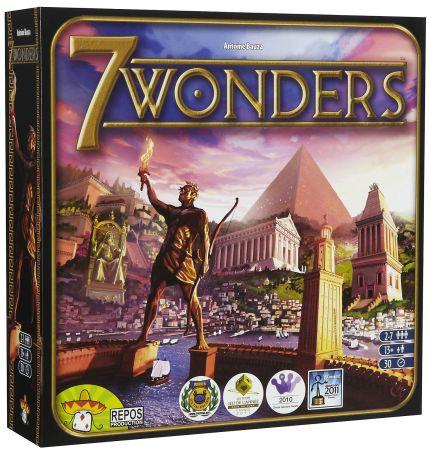 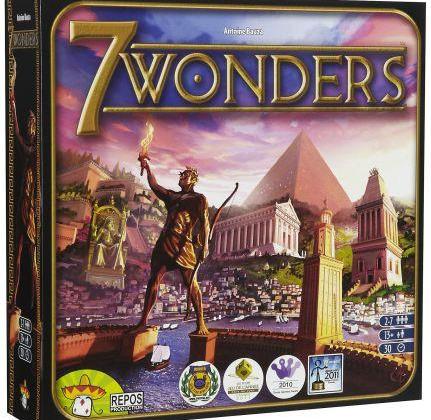 On December 3, 2014 by Artem Safarov With 4 Comments - Board Games, Review

7 Wonders is a smash hit civilization building game from French designer Antoine Bauza. Much like the titular wonders it is truly monumental in its’ achievement – a game that accommodates up to seven players, has substance and still fits within half an hour. Mixing luck of the draw with solid tactical planning and eliminating down time it is a masterfully designed game that is easy to pick up and hard to grow tired.

Two to seven players pick one of the seven ancient city-states to bring to greatness, corresponding to the classical Seven Wonders of the Ancient World. Not only does the game aim to entertain, it also carries certainly make you remember that it is Babylon that houses the Hanging Gardens etc.

The game consists of three decks of cards, each corresponding to an Age and played in sequence. For each Age the deck is dealt to the players and every turn the players play one of the cards and pass the rest to their neighbor. The cards themselves are the structures comprising your city state – these either allow you to build more structures or score you victory points in the end of the game.

The game is truly a “point salad” – there are seven (of course) ways to score points and different types buildings work in different ways contributing to the total. Culture buildings like temples and palaces give a direct linear bonus, the yield of scientific buildings starts slow and grows exponentially the more you have. Each building has a cost in resources – your civilization must either produce enough resources or be able to buy it from neighbors who do, adding a neat trade element. The neighbors mechanic also applies to warfare – you compare military strength at the end of every Age to determine who scores or losing points. 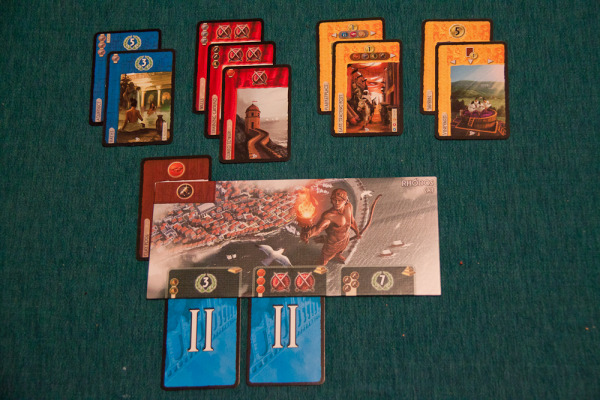 Rhodes plans to buy what it can afford and take the rest by force.

Last option is to use a card to build up civilization-specific Wonder, granting unique bonuses and adding character to each of the seven options presented in the game. The game goes on until all three decks are depleted and the points are tallied up. Whoever ends the game with the most points claims the glory of victory.

The single greatest achievement of 7 Wonders is almost total elimination of down time. Whose turn is it? Everyone’s. All the time. Try to keep up! This elegant mechanic moves things along at a brisk pace and while light to medium analysis paralysis is possible, it rarely interferes with the dynamic of the game.

The game features a fairly steep learning curve – its’ smart iconography is not immediately obvious in some cases and new players will be referencing the manual frequently as slight changes in a symbol’s position will change the mechanic it represents drastically. The way your actions contribute to victory is also not very clear in the beginning (especially to those with little experience in point-salad games) and so a first game risks being a glorified tutorial. It is at this point that you risk losing a new player who decides that what they just had inflicted upon them is little fun and too confusing.

Despite some military setbacks, the Pyramids of Gizah are complete!

The enjoyment, however, takes hold with the first meaningful game. The game moves briskly and offers sufficient interaction opportunities as you try to point out the plans of opponents who are getting way ahead with their science or are shocked and appalled to learn that your peaceful neighbor has just invested in war elephants.

7 Wonders is all about choices – each new hand passed on to you presents a new selection of buildings and you have to build the one that makes most sense considering your available resources and existing structures. There is a variety of strategies available and experimenting with the different mixes of culture, military, science and commerce is great fun (as any red-eyed Civilization fan will tell you at 4 am).

One of the game’s great strengths is that the victory point collection never becomes a droll math exercise. The evocative artwork, the simple and logical connections between buildings, the one-at-a-time choices all combine to keep decision making at the thematic level. It rarely devolves into a point calculation that drains away the fun to some extent.

The game automatically and non-intrusively provides increasing complexity levels – beginners will be treating each hand as a unique choice and focus only on their own civilization. More experienced players will be able to take into account the actions and tactics of other and may be able to plan for the time when their current hand makes a round and comes back to them. 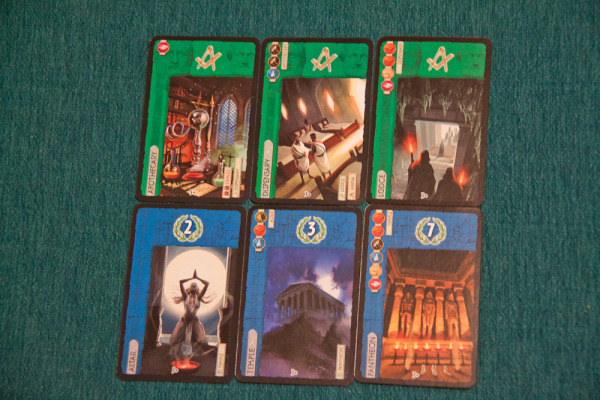 Despite the military aspect, the conflict in the game is restricted to competing and not direct confrontation. While its’ fun being outraged at Babylon’s new fondness for fortifications, it rarely feels that it is a direct dig at your chances of success.

7 Wonders gets so many things right that it is impossible not to recommend it. It might need an experienced player to explain things to newbies, but the learning curve is not particularly high. With its’ solid decision-making, appealing theme, right mix of luck and skill, short duration, civilized competition it makes for a wonderful game. Give 7 Wonders a shot and you will love seeing your city flourish from the first clay pit to the torch proudly held by the Colossus of Rhodes.

Board Games, Reviws
Cauldron: As we approach the end of 2014Deduction, Confusion and Renaissance Masks