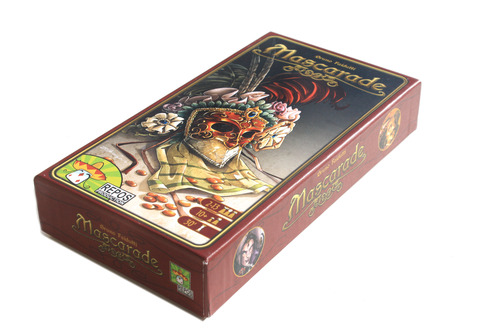 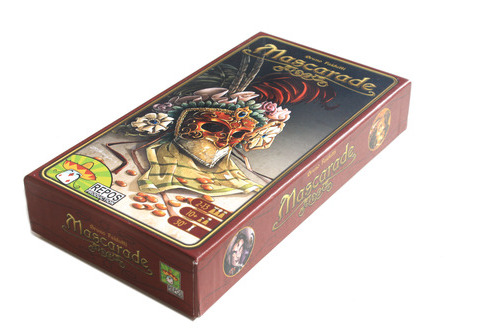 Social games often make players try to guess others’ hidden role while hiding or misrepresenting their own agenda. Mascarade, a card game featuring phenomenal art and great potential for laughter-inducing confusion, throws a wrench into this by making it so that you are not even sure what your role is. Bluffing, memory, deduction, luck and renaissance intrigue blend for fun that grows more hectic as the player count increases.

The intentionally misspelled Mascarade is a card game for a wide variety of groups, accommodating anywhere from two to whopping 13 players. Players take part in a masked party, each assuming a role of a renaissance figure – kings, queens, witches, thieves and so on. The goal of the game is to collect a certain amount of gold. Each character has their own way of collecting gold or affecting other players in one way or another. A king would collect gold from the “bank”, while a Bishop takes money from the player who currently has the most coins. The range of abilities is broad and interesting, with each character’s ability fitting its’ role well (the Thief steals money from nearby players; the Fool wreaks havoc by forcing people to exchange hands etc.). 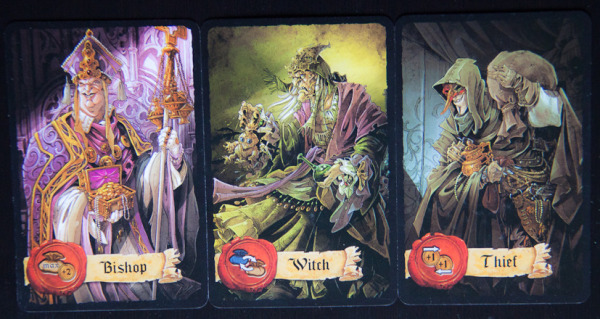 The haughty Bishop, the conniving Witch and the sneaky Thief

The trick is that you cannot look at your card, so the absolute certainty in the kind of card you have is a rare and valuable resource. Further complicating things, players can exchange cards with each other or pretend to do so in an attempt to throw off the calculations of others. You may also spend a turn to look at your card to get some solid information. In order to use a character’s ability you claim to be that character – even if it is a blatant lie. You are only caught if another player contests your move by also claiming to be the character you called out. In that case, all contesting players open up their cards (offering a sanity-saving glimpse into what the roles currently are) – those who lied have to pay a gold penalty. The game proceeds until one player is able to collect a certain amount of gold, giving him victory. 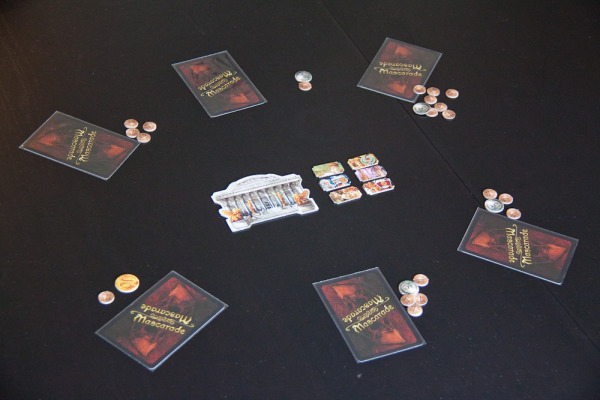 The masks are on and the ball may commence!

Mascarade is a joy to look at – the illustrations on the cards are phenomenal and it is truly a shame that these masterpieces are face down for most of the game. The cardboard components are solid and durable. It is imperative to keep the cards from being damaged or marked in any way – being able to differentiate between them ruins the game. If you sleeve one game in your collection – this is it.

The games go quick, keeping to the advertised playtime of half an hour with small and medium groups. The pace is fast and there are plenty of laughs all around as players try and fail to remember the locations of the cards. A good memory will serve players well in this one, as those who are able to follow the roles are the ones who do best. The social aspect of this game is somewhat reduced – while you may bluff talking about your plans and actions, memory, deduction and probability management play a larger role. 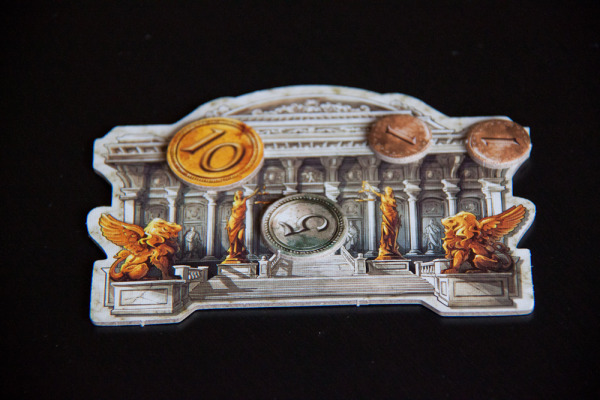 Judging by the piles of gold in the courthouse – many a bluff was called.

Because of the reduced social element – it is not necessarily a party game and reliance on memory and logic does not mix all that well with adult refreshments. It works great for larger group of people who are not averse to stretching their brains a bit.

The design of Mascarade achieves a great mix of confusion and ability to plan. The ability to switch cards (or only pretend to do so) hands players some control over information in the game and it is managing this information that becomes crucial.

The abilities of different characters mix together in very interesting ways and the games are quite different based on which characters are used. The different combinations to try make the game very replayable and will allow groups to find mixes that work best for their tastes. The abilities are not very easy to internalize though and a first play through is usually a wash, only allowing players to memorize the abilities. It is not hard either though and once everyone is on board the game flows very nicely. 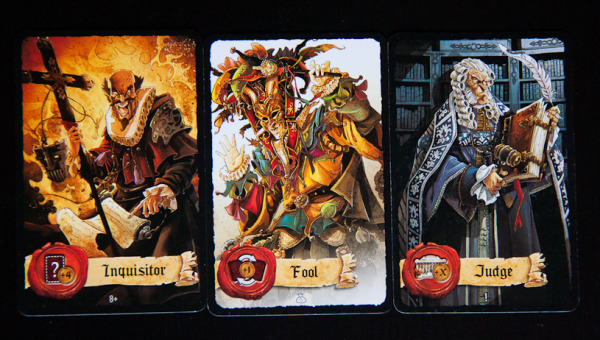 The wicked Inquisitor, the whimsical Fool and the stern Judge

The lack of information and clarity ends up being intriguing rather than frustrating and building your plans on maybes and what-ifs is great fun, especially once the cards are revealed and no one is who they thought they were.

The ability to plan and control information slips away as the player count grows and for groups of ten and up the game becomes a chaotic free-for-all of bold lies. Not a bad experience, just a different one. The game is much more balanced and measured with five to seven players.

There are a few caveats to properly enjoying Mascarade – you need a group that is large enough yet not too large, is willing to plan and strategize and at the same time does not get hung up on their plans being blown to pieces. There is a small steep learning curve too, but once you memorize the abilities – the amount of fun this game will give you is great. Those who like this game’s unique blend of uncertainty and strategy will absolutely love it, so if that sounds like your cup of tea – give it a shot.