Castle Panic by Fireside Games was a quick, light, easy co-op, ideal for younger gamers. While it offered simple and intuitive gameplay, the lack of complexity or challenge quickly made it lose its charms for more seasoned gamers.

The Wizard’s Tower expansion, released in 2011, aimed to address these shortcomings. The result is a game that is meaner, more involved and ultimately significantly more rewarding than the bland entry-level base offering. Let us take a look at how it goes about achieving this:

Same premise, new components. The basic premise of the game remains the same – defend your castle from monsters swarming out of the forest. Survive the onslaught with at least one tower standing and you win. The only difference is that now one of your towers is replaced with the titular Wizard’s Tower, allowing you to blast enemies with spells.

New Monsters – Gone are the harmless 1-hit goblins. Replacing these in a new fancy black cloth monster bag are a hosts of new creatures. These range from intimidating 4-hit Ogres to speedy Warg Riders to creatures who are immune to attacks at certain ranges. These mix nicely with the base game monsters to provide a rich set of challenges. It takes a higher degree of planning to figure out how to overcome these and the game is not shy about throwing you curveballs as your carefully planned attack falls apart because a new effect or monster just shifted everything on the board.

Basilisk – one of the new Mega Bosses

New Bosses – in addition to a couple new regular “boss monsters”, Wizard’s Tower introduces an entirely new class – Mega Boss Monsters. These are formidable creatures like Chimera or Dragon that have upwards of 5 hit points and move about the board in an unpredictable fashion. While the game comes with 6 of these you will only encounter three during any given game (adding welcome unpredictability). The mega bosses provide great sense of culminating threat that was sorely lacking from the bland base game monsters. 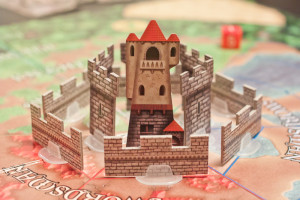 New Abilities – As long as the Wizard’s Tower stands players may use “discard and draw” action to pick up a Spell instead of a usual card. The spells are somewhat more powerful than Castle cards – most of these are extremely effective in specific scenario (e.g. a group of monsters in the same space). Spells range from direct attack to movement to rebuilding your castle to strategic sacrifices for great gains. These bring a lot of new strategies and excitement to the game. The Castle deck also gets several new cards added to it with some interesting additional effects (like changing the range or colour of a hit card or allowing other players to take turns during yours)

New Mechanic – the most significant new rule is ability to set things on Fire. Little tokens can be added to structures and creatures, damaging these over time. Fire is most often produced by either Wizard’s spells or fire-breathing mega boss monsters. It is a neat new mechanic that doesn’t dramatically shift the balance of the game. 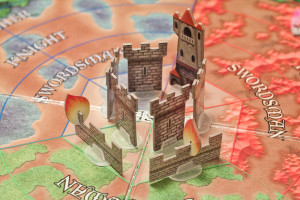 The place has seen better times

Combined, these additions change Castle Panic significantly. It is no longer a cute game about bumbling goblins but a serious challenge requiring all of your cunning that you are most likely going to lose anyways. New abilities granted by the wizard’s tower make players more powerful, but the game’s difficulty increases by a wider margin. This increased complexity and challenge is reflected in the age recommendation as it is bumped from 10+ for base game to 12+ for the expansion.

For serious gamers this expansion is necessary addition. It will breathe new life into your enjoyment of Castle Panic if you played it a couple of times and then lost interest. Combining the appeal and intuitive rules of the original with the challenge and complexity of expansion brings the experience to a whole new level.

May your defences hold strong against the incoming horde!