Taking the Lovecraft theme that is one of the most frequently used in board games, Fantasy Flight Games managed to create something new and special – a co-op game of many subsystems that come together almost flawlessly to create engaging, coherent and suspenseful stories time after time after time. Put on your fedora hat and collect your occult research. We are going to save the world or have a blast trying in Eldritch Horror.

The game, gorgeously realized like all Fantasy Flight productions, takes place on a large world map with a couple dozen key locations connected by sea routes, railways and walking trails. One to eight players play the roles of investigators, attempting to stop a nefarious Great Old One – a terrible being of unimaginable power – from awakening / entering the world and wreaking havoc on our planet. Every turn players get to travel around the world collecting information and clues. Each player turn culminates in an encounter – a short scenario that takes place depending on player’s location. If you are in Istanbul – one of the several pre-determined Istanbul-specific encounters will take place. During these, players are often required to use their RPG-like attributes (Lore, Strength, Willpower and the like) to pass tests determining their success or failure. The tests use dice, introducing a large amount of luck dependency.

Once players finish their actions, certain game effects take place, introducing new obstacles like spawning monsters, bringing the Great Old One closer to awakening and so on. Players have a flexible but limited amount of turns to complete a set of three specific objectives (unique for each of the four Old Ones included in the base game). Completing objectives before time runs out wins the game. If the Great Old One awakens – the game goes into “final boss” mode, where players have a few last chances to win in very difficult circumstances. If these final attempts do not succeed – the players are defeated and the world is devoured. 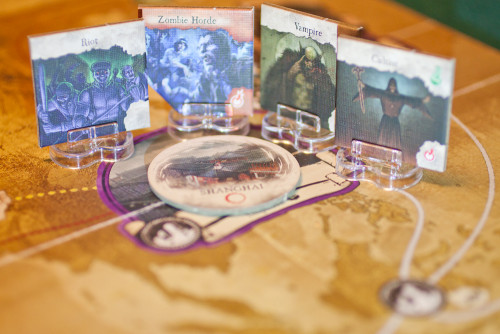 Shanghai is not a nice place to visit right now.

Eldritch Horror is a medium game in terms of complexity. There are quite a bit of options available to players, however most of these adhere closely to common sense and do not require memorizing arcane rituals (leave that to your characters!). A fair bit of attention is required to make sure you activate all the necessary effects during the appropriate phases of the game, but the effects themselves are streamlined and do not suffer from labyrinthine interconnections. There is a lot happening and it all feels right.

The twelve characters that come with the game are all interesting and unique, spotting a decent mix of gender/race representation. Characters are highly customizable – you can improve their abilities through in-game learning (a welcome RPG element), outfit them with allies and weapons and teach them powerful spells with unpredictable side effects. Finally, characters can take on a variety of mostly negative conditions that add a ton of flavour to exactly how disfigured/insane the struggle has left your hero. 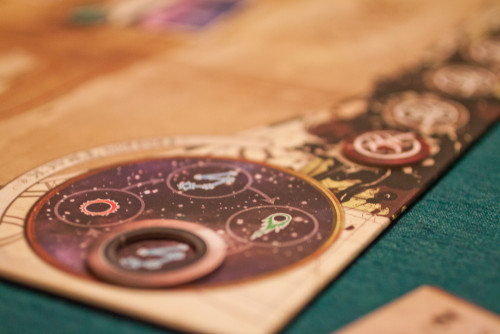 All is lost as the latest omen spells doom for our world.

While complexity is medium, Eldritch Horror is by no means a short game. With several players, it takes up to 3-4 hours. While these hours are well spent, the time investment might be off-putting to some. Solo plays can be breezy clocking in at 1-1.5 hours for experienced gamers. The game is extremely generous listing maximum amount of players at eight. In my experience, anything more than 5 leads to complete player disengagement due to down time. While there can be a lot of player interaction through joint discussion and planning – the character interaction is minimal as most characters will be going off on individual adventures and the game has precious few mechanics that reward in-game teamwork. This is one game where splitting the party is perfectly acceptable.

It is also worth pointing out that a certain understanding of the game is required to enjoy it. First games might be somewhat frustrating as new players are not yet able to meaningfully participate in discussions. The learning curve is not steep though and the story engrossing enough to not make it a chore.

I have already listed several drawbacks of the game – it relies a lot on luck, it lacks character interaction, it can take a long time. In fact, you know what? Mechanically it is really not the best game out there. There are some balance issues too like disproportionate difficulty of some objectives. Ultimately, though, it does not matter.

What Eldritch Horror delivers is something more than a game. It is a full-blown experience.  The many game components click together like gears in a complex mechanism, whirring the entire thing to life. Now and again, the components interact to produce amazing, almost cinematic scenarios – an expedition leader who specializes in getting teams together gets paranoid and murders his companions; a flying monster carries an investigator halfway around the world – convenient transportation but the character’s sanity suffers. The descriptive text is very good throughout, plunging you deep into the Lovecraft mythos, setting a solid dark mood. 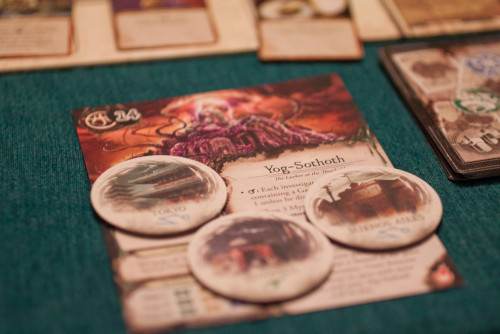 Yog Sothoth, the Lurker at the Threshold is about to devour the world.

You feel that the world is ending, that there is not enough time, that you fight against an overwhelming force and just might succeed if you are smart and lucky. Your characters become fleshed out and you always remember that time when you got locked up in prison when you crucially needed to be in Shanghai to close a gate. All the terrible things that happen to your characters – the injuries, the madness – is right there in the cards.

The game tells a story. And it’s such a robust storytelling mechanism that the stories do not get stale time after time. That in my mind is its greatest achievement.

When defeat is at hand, the Old One awakens and you understand just how dire the situation is and how unlikely your chances at success – the climax matches those of many films in intensity. It is too bad that victories mostly do not have the same payoff (rare as they are). Achieving all goals prior to the awakening of the big bad feels flat as opposed to the apocalyptic world-end encounters.

I will acknowledge that the game is not for everyone. The reliance on dice will drive some euro gamers mad as surely as staring into Cthulhu’s eyes. The initial learning might be challenging. Some balance issues are present. However, if you are in the mood for an engrossing experience that does not let go – try Eldritch Horror. The dark stories it will tell you will stay with you for a while.