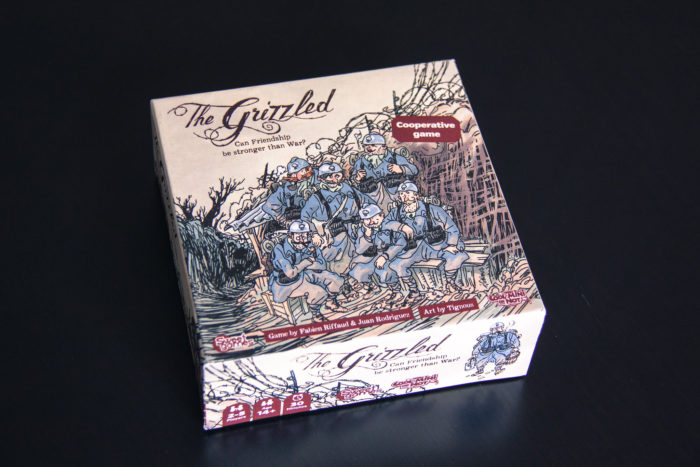 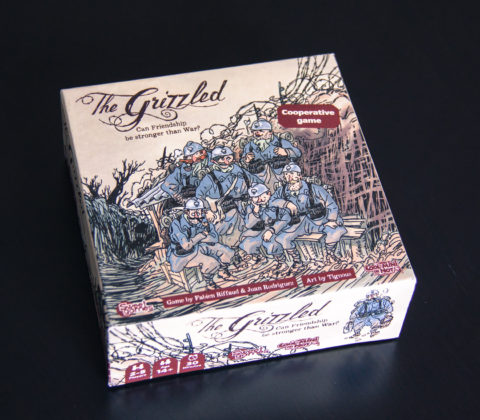 War. War never changes, or so Fallout intros have been telling us for the past twenty years. What about it never changes exactly? Is it the heroics, the explosions, the glorification of sacrifice that brave men and women go through? Or is it the broken lives it leaves behind and the attempts to put these back together through friendship, love and a sense of community? The Grizzled, a title suggesting a scar over a painful wound, lands squarely in the latter category and scores an emphatic victory in doing so.

The Grizzled is a cooperative game for 2-5 players, playing the roles of French soldiers attempting to survive the horrors of World War I. Each round a certain amount of cards is dealt and the players have to take turns getting rid of these cards, meeting increasingly restrictive conditions. The cards represent either external challenges faced by the soldiers (terrible weather, gas attacks) or trauma and injuries they withstand over the course of the war. 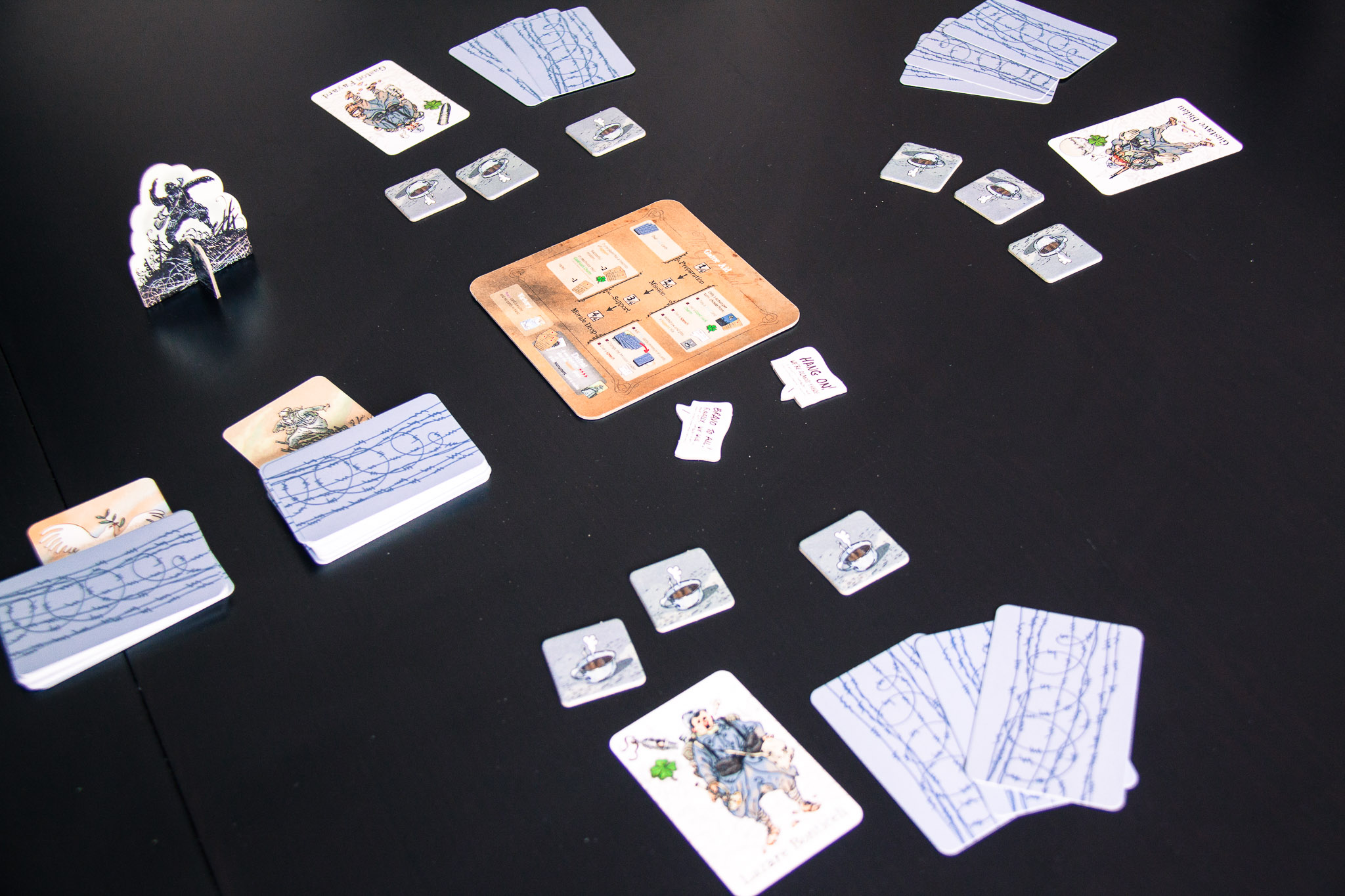 The 3-player game of The Grizzled all ready to play.

The game places restrictions on how many challenges of the same kind the players can take and how many traumas a soldier can withstand before succumbing, so you have to constantly weigh what cards you can / should play. The more cards you keep, however, the more cards are added to the supply you need to go through for the win. If you manage to get rid of all the cards in the supply without losing any of your soldiers – you win!

Following every round, the players have a chance to “support” one of the soldiers by offering a cup of coffee and a heartfelt talk. This allows getting rid of some of the negative effects, freeing up some of the restrictions for following rounds. 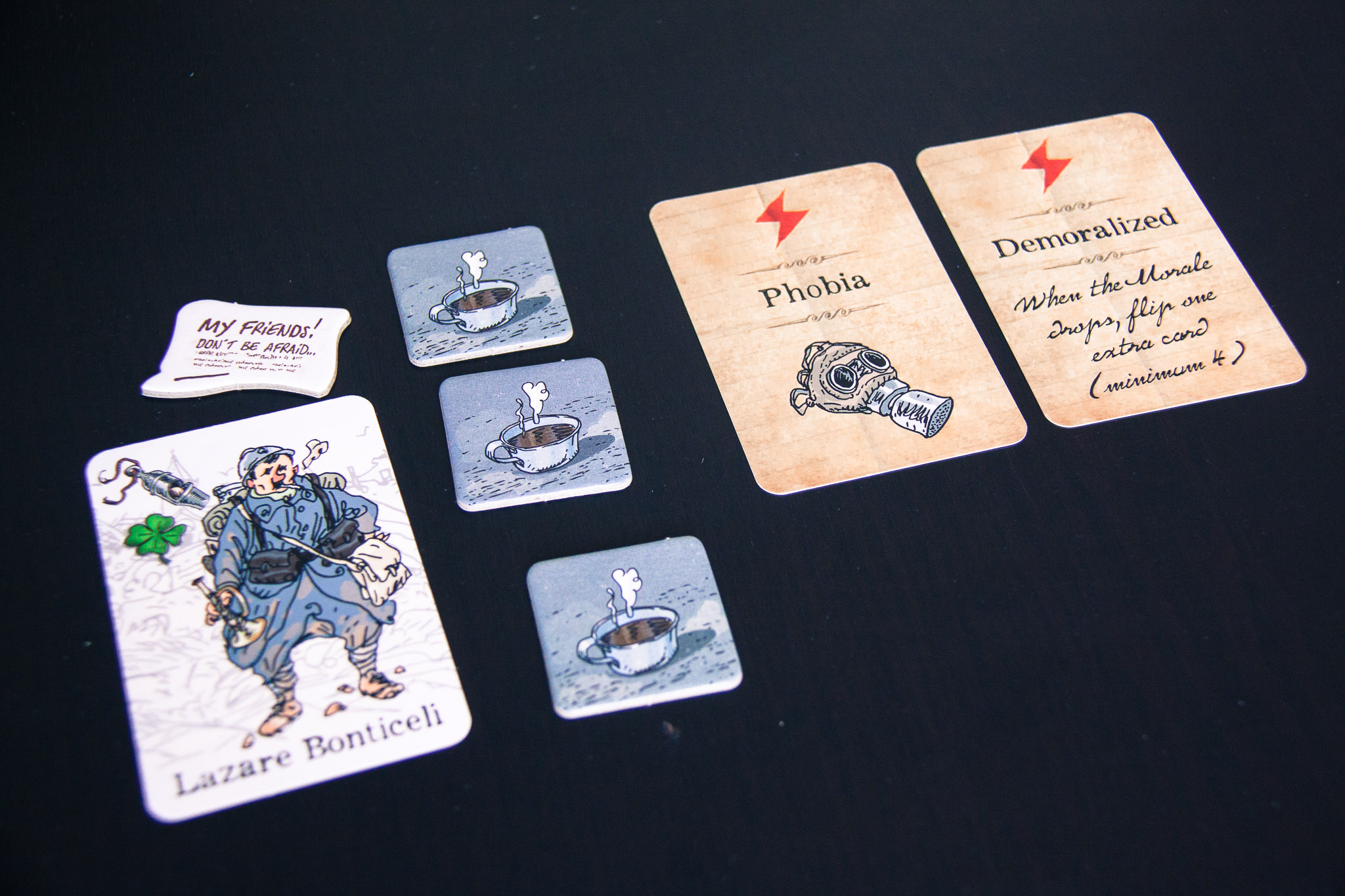 War is a rough affair as Lazare can attest to.

How does it play?

A defining characteristic of The Grizzled is that no game-specific communication is allowed, so you can’t give out clues like “hey guys, don’t play any more trench assault symbols” or “let’s all support Jenny because she’s got the most traumas”. This does wonders in getting rid of the “alpha player” problem that makes many co-op games playable by one person who always knows what everyone else should be doing.

The rules with their quirky game flow and the understanding of restrictions can be a bit slippery to grasp. This is not because of complexity but rather an inexplicable feeling of this game being different. This may make the first couple of games confusing, but not make these drag out as most will fit comfortably in a 30-min window. 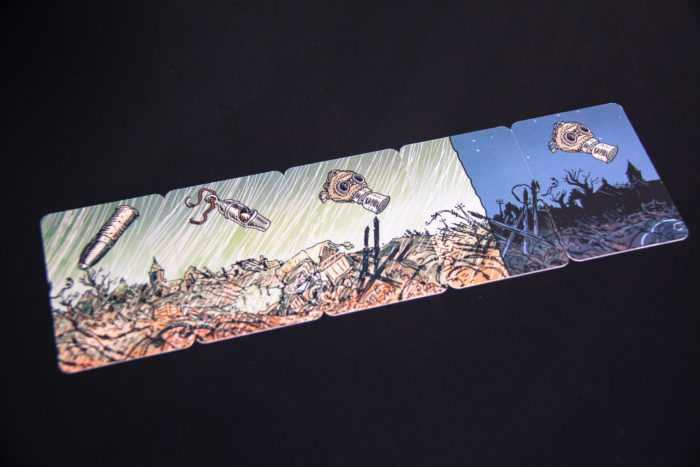 The unforgiving landscapes of war.

The game is relatively hard, getting into the “brutally difficult’ territory with higher number of players. It even comes with a “harder” level of challenge that I had zero interest of exploring because the base game is in no danger of being a cakewalk.

The “no game talk” has an interesting side effect of discussing what happens not from a game mechanics perspective but from a storytelling / role-playing angle, which is welcome. It also results in many terrible French accents being deployed as the players bemoan the fate of awkward-looking mustachioed warriors.

How does it feel?

The note about the terrible French accents might make you think that the game is humorous in a way. It is not. When you look at your soldier, demoralized, wounded and terrified of snow because it reminds him of that terrible first mission – you will not be in the joking mood. The art, disarming in its off-balance sincerity and willingness to depict flaws and shortcomings, only adds to this. It is ridiculous, yes, but poignant in showing that the only way to get through all the horror surrounding these folks is embracing this awkwardness and a cup of coffee passed to you by a friend. It truly nails this poignant depiction of a difficult subject and manages to result in a game that is both uplifting, light-hearted and tragic in the stories it tells. 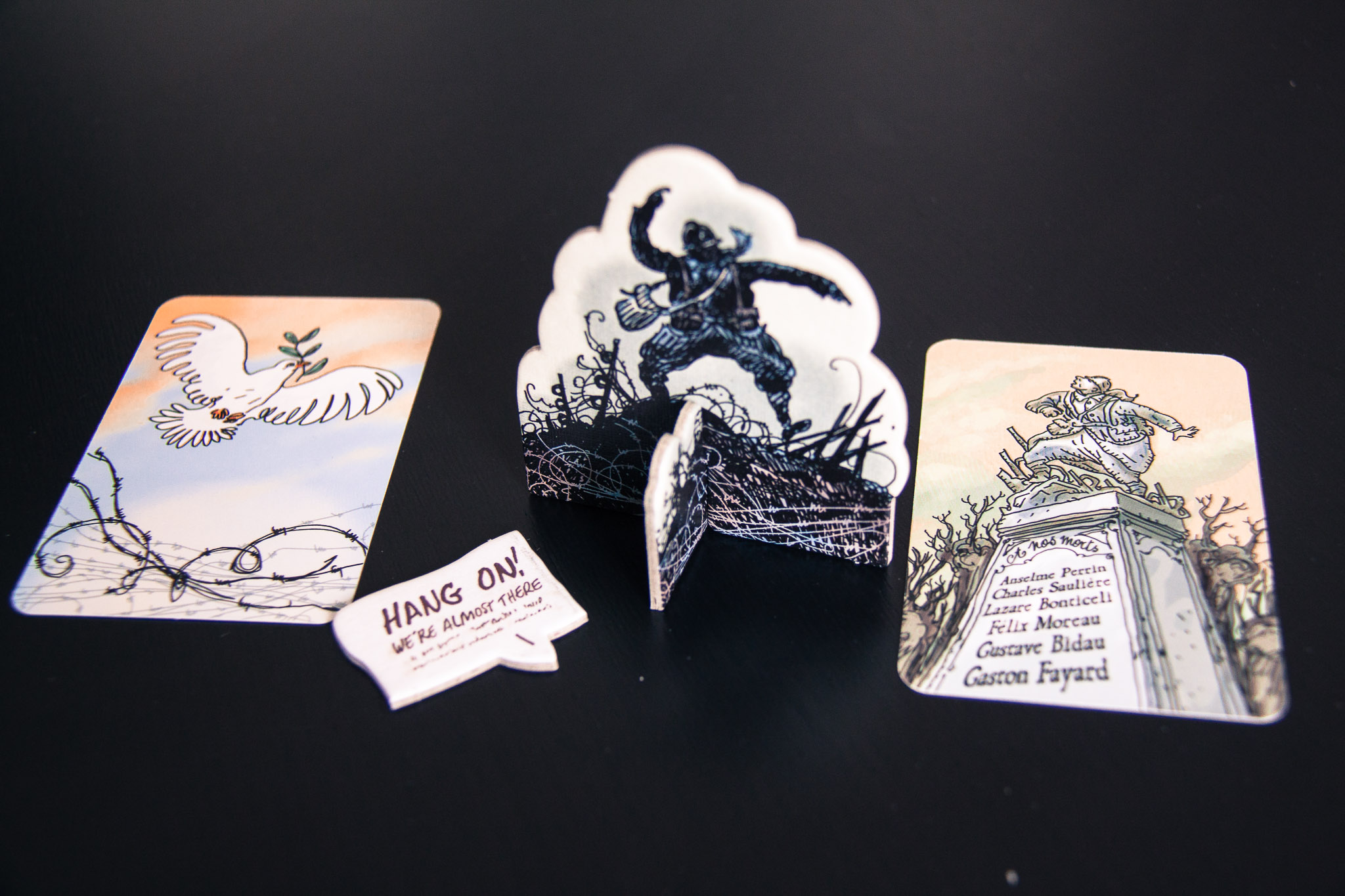 Is it a good game though? Mechanically – I’d say it’s alright. You are managing risks, you are calculating when to give a stirring speech to help your friends get rid of a particularly troublesome card in their hand. You are trying to strategize whom to support and are rushing to the end of the supply deck before you are overcome by the many dangers of war. It is truly nothing special on its own, but infused with the melancholy of its theme and art it really creates a special experience. Knowing that the illustrator who did the art for this game, Tignous, was one of the victim of the 2015 Charlie Hebdo shooting, steeps the game even further into disarming sadness.

So will you enjoy this game? It is unlikely to satisfy those who are looking for a robust strategic experience or a rich social interaction. It is likely to confuse those new to games and looking for a casual experience. It does occupy a unique niche providing a neat balance of heart, brains and courage that few wizards can offer. It is unlikely to become your favourite game but it offers enough consistent charms to warrant a place in a collection. If not to offer a reliably alpha-player-free quirky co-op experience than to remind you that war is good for absolutely nothing.

Board Games, Reviews
Viceroy Review: Pyramid shaped-point salad – pleasant but not filling.2016 Gaming by the Numbers