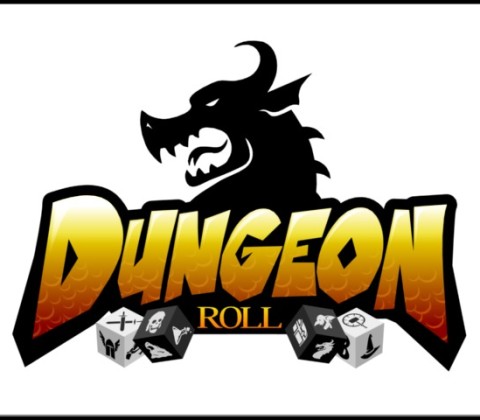 A party of adventurers delves into the dungeon for riches and glory. The classic (or tired as less generous gamers might say) premise gets a unique treatment in Dungeon Roll – a wonderfully compact dice game from Tasty Minstrel Games. They aren’t exactly reinventing the wheel — there are thousands of card games and RPGs that require a dice roller or custom dice, but the dice were a major selling point for this game and the cool factor of the custom dice fails to translate into anything substantial, however, the game seems to be perfectly content with that.

Dungeon Roll was a Kickstarter project that was an outstanding success in early 2013, collecting more than 15 times its’ original goal in pledges. One of the reasons undoubtedly contributing to this success was the physical presentation of the game. To start off it is tiny – the box fits into a palm of a hand, presented as a treasure chest (with a fitting Mimic option available as an exclusive). The game itself consists of a handful of cards, a few dozen small cardboard tokens and most importantly – fourteen dice that act as the game’s mechanic basis. 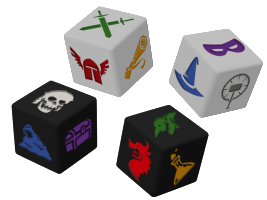 The game is a competitive exercise for 1-4 players, where players attempt to outdo each other in whose adventuring party descends deeper into the dungeon and comes out with most treasure. The white dice represent the player’s party – it is rolled for every expedition. Then for every level of the dungeon black dice are rolled, representing the hazards that the party encounters and potentially the rewards it finds. Each white die can be used to get rid of one or more black dice (e.g. a cleric, represented by the grey hammer can get rid of any monster rolled on a black die or of all the skeletons rolled at once). Rolling matching sets on the black dice is therefore advantageous as it allows you to use your party members (white dice) more effectively. Black dice can also reveal positive finds like treasures (that score points) or potions (that return used party dice to the player). Finally, a dragon can be encountered – once a certain number of these results has been rolled a mini-boss like battle ensues, requiring significant commitment of white dice and providing significant rewards.

After clearing out any given dungeon level, the player faces a choice to either stop or keep going further to face another level. The further you descend the more points you score, however if you are unable to defeat all monsters on a level – you get nothing, resulting in a push-your-luck approach to decision making.

There are eight leaders to pick from, introducing unique benefits and somewhat customizing the gameplay. Many treasures collected also allow in-game bonuses – players can use substitute these as bonus dice, use them to get out of tight spots, etc. Each player attempts three forays into the dungeon and whoever scores the most points based on dungeon levels conquered and treasures amassed, wins. The whole affair takes 10-20 minutes of light dice-rolling. and not a whole bunch of thinking.

The game’s original highly abstract approach to combat resolution, combined with the neat factor of the custom dice carries the first several plays, however the excitement fades somewhat quickly as even intermediate gamers will soon easily spot the one right move for any situation, leaving the game to be a simple exercise of hoping to get multiples of the same result. Certain decisions still impact the outcomes – for example to use the treasures to get to a deeper level or to cut your losses and run, scoring points for the remaining treasures instead. However these end up being less strategic and more mathy, not doing the game any service.

There is no player interaction whatsoever as the game is basically a solo exercise that can be played by several people taking turns, further detracting from its’ appeal. However, the game does work very well as light solo filler – playing solo removes annoying down time and using the game as a time-killer rather than a main attraction of a gaming night sets a low bar that it clears.

All in all, due to the game’s low price point, compact size and attractive physical components – it should make a nice addition to most gaming collections. It will most definitely not replace your favourite game or lead to game nights dedicated entirely to Dungeon Roll though. Realistic expectations are key at enjoying this innovative but ultimately superficial light game.

Board Games, Review
Travel games for business tripsMice and Mystics Review: An ambitious and lovable disappointment.