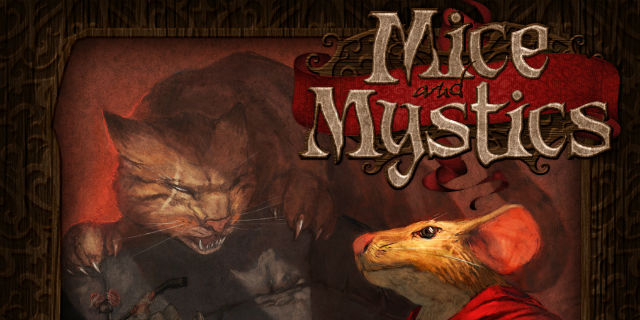 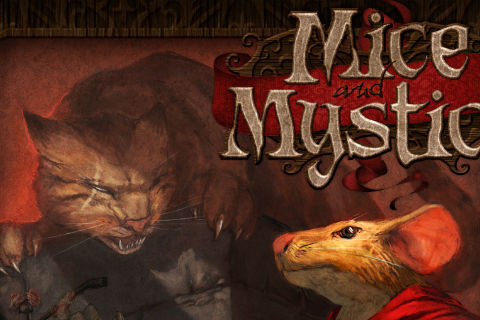 Mice and Mystics Review: An ambitious and lovable disappointment.

Form and function rarely go hand in hand. One is always stronger that the other – brilliance of Carcassonne hiding behind simplistic graphics, gorgeous FFG components masking gameplay that is sometimes unwieldy. But in no game is the discrepancy is as glaring as in the imaginative, lovable but ultimately disappointing Mice and Mystics.

The high hopes start with the unique nature of the game. Plaid Hat Games delivers what is basically a mini roleplaying campaign that can function without a game master. Eleven chapters, each expected to last 1-2 hours gaming session. A story that progresses, engaging you with the characters through their journey, connecting past outcomes with current events.Then there is the setting. In the most traditional fairy tale fashion an evil queen usurps a kingdom and banishes those loyal to the good old king to the dungeon. In an attempt to escape they use a ritual to transform into mice, kicking off the adventure that sees them escape, regroup and ultimately come back to triumph against the sorceress.

This rodent-eye view is realized in gorgeous detail through finely sculpted miniatures and beautiful map tiles. The game’s aesthetics are stunning, creating a unique mood, getting you ready for a great engaging fairy tale. You read the fittingly storybook introduction and chapter setup and on you go…After the game spends so much energy setting up it offers you little in terms of actual gameplay. There is an inordinate amount of custom dice rolling, most of it for resolution of its’ simplistic combat system. As your mice battle endless waves of cockroaches, rats and occasional spiders, the routine gets old extremely fast. Your options are extremely limited and that is the game’s greatest downfall. The decision making is non-existent as the game quickly turns into a droll sequence of rolls, highlighted by use of special abilities, powered by the game’s cute “mana” – cheese. If opponents gain a certain amount of this “cheese” an encounter occurs, which most of the time is just more monsters, for more rolling. And so the strong points of the game – the story, the characters all of that gets lost and forgotten in a series of comparing how many swords and shields you rolled. Characters’ base options are limited to moving, hitting things or searching for equipment (most of which allows you to hit things better or become harder to hit yourself). 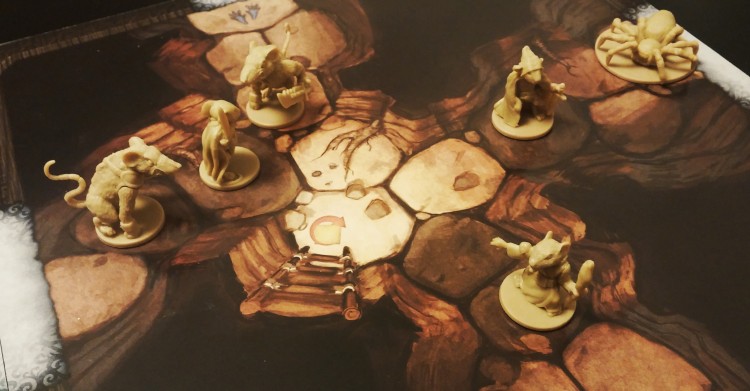 Rodent Rumble in the tunnels!

Perhaps this repetitiveness and simplicity makes the game more child-friendly, coupled with the cute theme. Children I’ve been exposed to have grown tired of the rolling quite soon, but the mileage may vary on that.If a group is dedicated and patient enough, the story does develop and new additions introduced in later chapters (like the unique environment elements) help bring at least some variety into the game. However in my opinion these rewards are too far and few in between of the repetitive uninspiring combat to be a sufficient consolation.

And so the fantastic production and a bold story-driven approach fail to capture attention or imagination due to the weak underlying game system. While I applaud Mice and Mystics for its innovative approach – I cannot recommend it as a good game – for adults or children. The game’s success is very encouraging though as I definitely hope that it is but a first step in this direction for other endeavors. With more exciting mechanics and meaningful decision-making, amazing stories can be told through gameplay. I definitely look forward to these.

Board Games, Reviews
Dungeon Roll: Short-lived custom dice funTicket to Ride review: All aboard the Board Gaming 101!