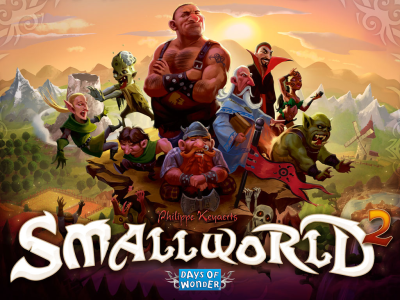 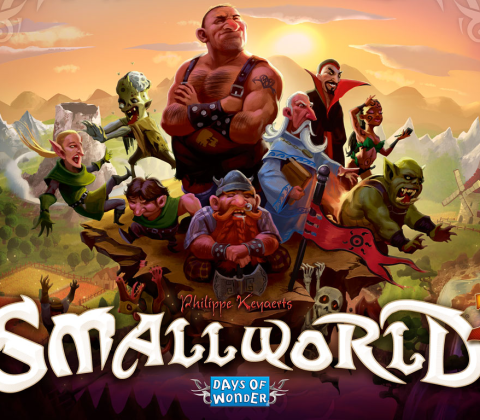 The ever-hungry pillaging halflings have just occupied these hills only to be driven out by the berserk dwarves looking to reclaim their lost mines. Are they going to be able to keep control of it or are the flying amazons going to swoop in to steal their territory? Hilarious fantasy race depictions get multiplied by a variety of special powers to create a multitude of conquest scenarios in Smallworld – a light strategy game perfect for your tablet.

A map of a fantasy land lies before you – it is divided into a series of regions – lakes, fields, mountains, forests – many with special features like underground tunnels or magic deposits. Two to five players play as rulers of a series of fantasy cultures that aim to conquer and hold these regions, scoring points to become the most prominent civilization after a predetermined number of turns.

The races are created from two components – the base race and a special power – so that your elves can be either of a forest variety, seafaring or perhaps able to tame dragons. The race/power combinations are randomized for every game, giving the combinations of 14 races and 20 powers a ton of potential outcomes. 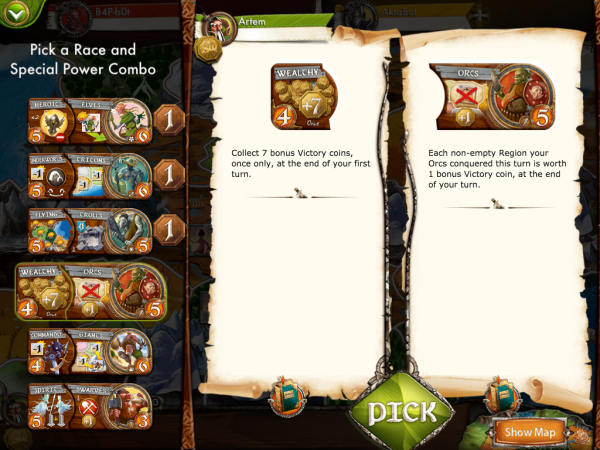 Don’t ask how these Orcs got Wealthy, it’s best not to know.

The race and power determines special rules that apply either in terms of scoring points (forest races score extra for occupying a forest) or for combat resolution (heroic cultures are resistant to conquest). It also determines how many tokens corresponding to your chosen race you get, so more powerful races like dwarves will be less populous while the vile ratmen have nothing going for them except for the fact that there is a ton of them.

The players then take turns spending their tokens to conquer regions – more or less tokens may be required for conquest of special terrain (mountains) or regions containing defenders from other civilizations. A small bit of luck is represented in that the last conquest is aided by a die roll that can allow victory even with insufficient forces. Once the conquest is finished, troops are re-distributed for best defense, the player scores points for the regions they occupy and the turn goes over to the next player. 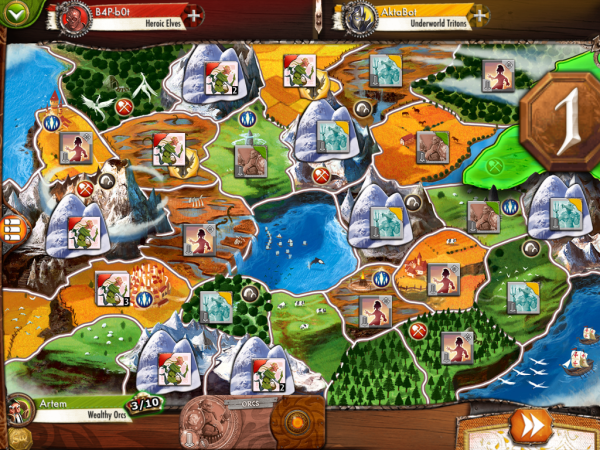 A rich fantasy land is there for the taking – each number of players comes with a unique map.

The game inevitably comes to a point where your civilization reaches a point where it’s spread too thin and further expansion doesn’t make sense – then it’s time to put a race in decline and pick a new one from the constantly renewed selection available to all. The tokens of races in decline get turned over and lose most of their special powers, however continue to score points as long as they hold down their regions.

Smallworld is all about two things – calculated conflict and keeping a multitude of effects in mind, introduced by the crazy mix of races and powers (I think peace-loving wights are my favourite). The conflict was always very well rendered in the physical form of this game, but the bookkeeping could turn messy. This is where the digital implementation truly shines. The technology neatly takes care of all the things you would need to memorize like keeping track of how many tokens you have left or how many you need to conquer this region with all the factors in play or how many points you score at the end of the turn.

The effect of the multiple effect in play was usually that the game would overstay its’ welcome a bit. It would be especially harmful since sometimes the winner would be obvious a few turns in advance. The digital version in contrast plays extremely fast and is super satisfying in solo mode, playing against 1-4 competent AI opponents. It really helps the game’s longevity that strategies for games with lower or higher player counts are very different and you need to adapt to what your opponents are doing. 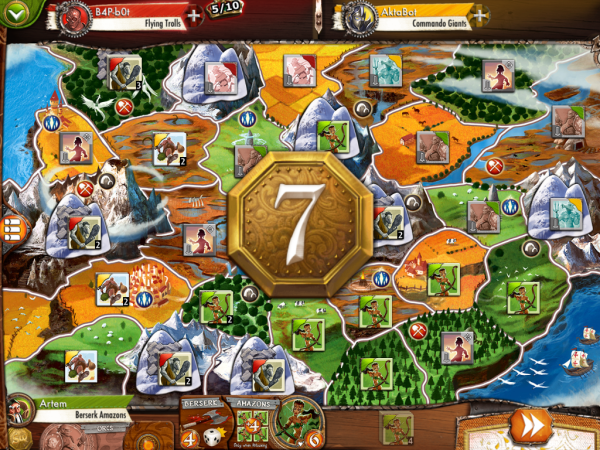 Let’s see how many coins the territories we still hold yield!

The graphics are extremely pleasant – you might not have a lot of action on screen, but whatever is rendered is beautiful and a pleasure to look at. The presentation and interface are generally strong points of the game, running fast, having options to skip viewing AI turns and generally offering a smooth and enjoyable experience. The information on all the races and powers is presented in an accessible way, so are numbers of tokens required to conquer a region. The technical implementation truly gets top grades for this one.

In addition to playing against the AI you can test your mettle against other human players either through pass and play or through online games. The pass and play functions very well as there is no hidden information in the game. The online play decreases the game’s dynamic flow and is less enjoyable, but gets the job done.

The base game gives you ton of variability with combination of 14 races and 20 special powers – for a few bucks more in in-game purchases you can unlock expansions broadening the options even further.

All in all – this is a very successful conversion of a board game into a digital format – it does not lose anything from the core game experience and streamlines the gameplay greatly. As many avid gamers will know, this is an important feature for any type of game that they play. If the gameplay doesn’t stream to the best of its ability, then gamers won’t be attracted toward playing it and that’s irrespective of whether it’s a physical or online game. With that being said, games like MAGIC: The Gathering (check out their website here), is gaining in popularity because of that very reason. The rules of the game set up the experience nicely, and once they’ve started playing, the gameplay has the ability to bring the game alive, just as Smallworld does in this instance. The latter game is also compact, very appealing and easy to learn – making Smallworld a great dose of board gaming and light strategy to take along on your favourite tablet. And once you’ve played all there is, if you have a craving for more strategy why not check out the best gameboy advance emulator on mobile devices as well? The retro device is famous for hosting some of the best strategy games mankind has known. And who knows, there may be a Smallworld 3 in the works to sate your appetite once you’ve played all there is.

Smallworld 2 is available for iOS and Google Play for around $8.

Apps, Board Games, Reviews
Takenoko : all zen no biteDixit review – A world of wondrous whimsy