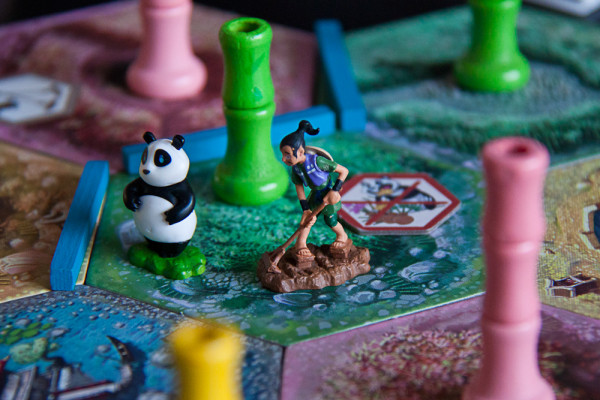 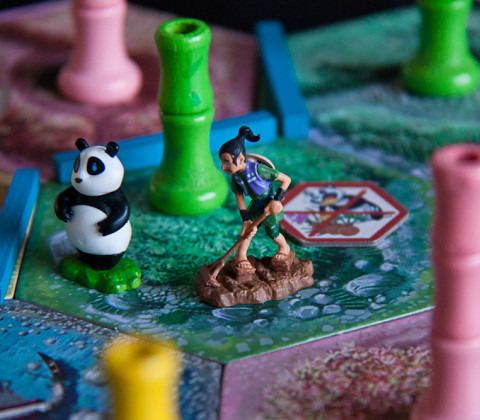 Takenoko : all zen no bite

Sometimes an experience just clicks. Every single aspect of it seems to be a drop filling a perfectly clear pond that reflects the sun just right. You are not going to look at what is at the bottom of the pond, think what it is that makes it so beautiful, or ponder (sorry) if you really wanted to be by this particular body of water. It will leave you completely satisfied – nothing extremely memorable or desire to immediately do it again, mind you – just a feeling that the time there was spent in just the right way. Want this experience in board game form? Get in the zen mode and break out the bamboo. You are about to play Takenoko.

In Takenoko two to four players play the roles of nobles at the court of Emperor of Japan, taking care of a gift from China – a giant panda, which acts as kind of a game’s mascot. You will build gardens from, grow bamboo and feed the panda in an attempt to fulfil three types of tasks that score you points. 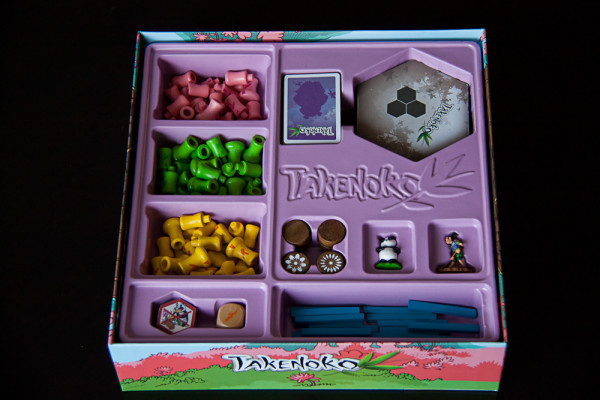 The modular game board is built of pastel-hued hexagonal tiles with very nice illustrations of bamboo gardens. Under certain circumstances, these tiles grow bamboo, represented by stackable wooden pieces that are used to represent different height of the plants. Finally – pre-coloured finely detailed miniatures represent the ever-anxious Gardener who grows the bamboo and the source of his anxiety – adorable giant panda that devours the plants.

On their turn, players may add new tiles, dig irrigation canals to make sure plants are watered or move panda or the gardener growing or eating bamboo. Each player starts with a few task cards and new ones can be acquired throughout the game. Each turn starts with a roll of a chunky wooden die that customizes each turn in some manner by offering variable weather effects – for example the hot sun may give you an extra action or rain could make bamboo grow on any space you choose. The players take turns until a certain number of tasks are complete and then points are calculated to determine the winner. 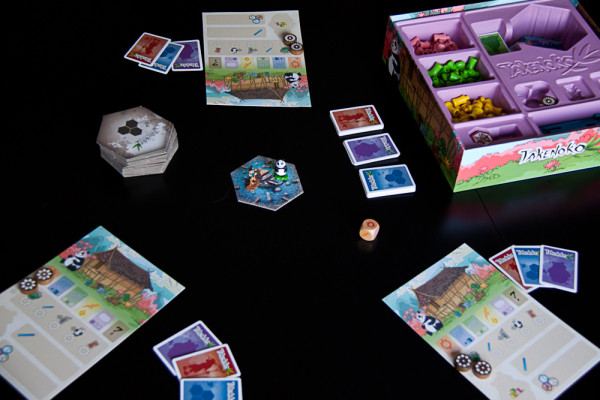 A three-player game of Takenoko all ready to go.

There are a few sub-systems at work in Takenoko, all interacting with each other – the building of the fields, which grow the bamboo, which you then feed to the panda. Getting the interconnectivity can be a little tough for new players, but the immensely likable components help get over that. It cannot be overstated – the pastel fields, the glossy bamboo, the excellent miniatures – this is among the most inviting games to play, even if its’ rules are firmly medium in terms of complexity.

Even if higher-scale strategy can be difficult to grasp from the get-go, the bite-sized decision of each round are not and the game gets going in a lively and dynamic manner. Each turn is rewarding in some way as you see the gardens expand out from the initial hex, bamboo sprouts shooting upwards and the panda growing fat and happy. 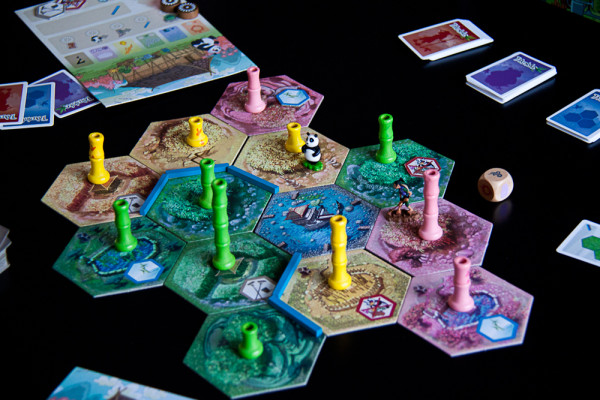 Before you know it the gardens are sprawling and bamboo is high.

The die adds in welcome elements to the proceedings both in terms of the variability (each one of your turns is slightly different based on the roll) and excitement – a desired outcome in an uncertain situation can feel triumphant.

The fact that other player’s actions can help you complete your tasks add an extra motivation to pay attention during the turns of others, however waiting for your chance to actively make decisions can get a little long in a four player game. The game can last a bit longer than the advertised 45 min duration and most of it is a very light and enjoyable affair with some good planning opportunities. A rare game does drag towards the end, but the veritable forest of bamboo you have probably grown by that point will make you so happy – you will most likely hardly notice it.

Takenoko is built on a series of solid mechanics that has every player try to maximize the benefits of their actions in order to complete their tasks as fast as possible. All throughout there is a sense of steady progress that is rewarding and encouraging. The game achieves this feeling of tranquil curiousness on what is going to come next, while making it practically impossible for you to feel like you are really falling behind or had a terrible turn. 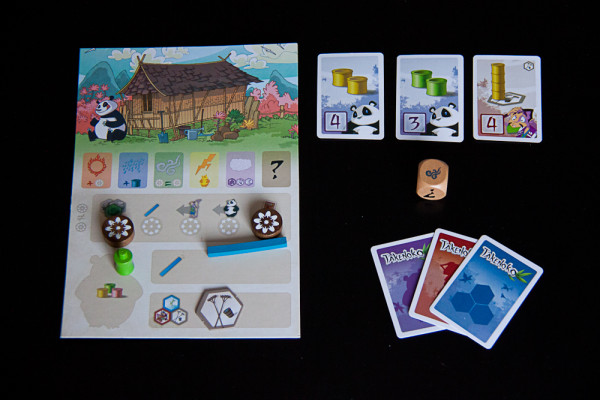 A player area. Note the complete lack of language dependency.

In fact, Takenoko seems absolutely intent on not letting any sort of negativity seep into the game. Specifically – players do not see the tasks of others and so it is impossible to try to meaningfully impact the ability of others to achieve their goals – all you have to do is try to make the best of your own. In my opinion – this is Takenoko’s greatest weakness – in carefully avoiding any conflict in its perfectly pastel world, it managed to remove practically all interaction. You are simply given the situation as the previous players left it for you at the beginning of your turn and then can further affect it to meet your goals.

At the end of each game there is a feeling of satisfaction, but not excitement – you never feel that there was that deciding turn when you should have done something else or when others have seen through your cunning plans. Ultimately – it is a deeply satisfying, intricate, very well produced multiplayer solitaire.

You could try to divine the others’ goals by their actions, but it is not a particularly effective strategy as the game’s intended way to play is obvious. It certainly does not make the game bad –Takenoko is a very solid, very pleasant offering that will work really well for people who are seeking to avoid conflict in their games. However, from the perspective of a competitive game – this particular panda just does not have much teeth.

Takenoko components are truly a delight.

Takenoko has loads of universal appeal and a gameplay that makes you think and relaxes you at the same time. Thanks to its consistent art style and top-notch components it is a pleasant and interesting game to play. The excellent presentation and gentle nature make it a great choice to introduce newer players to medium complexity in a safe and welcoming way. But if you are looking for a game to interact meaningfully with people you play against – look elsewhere. This panda does not quite have the teeth for competition.