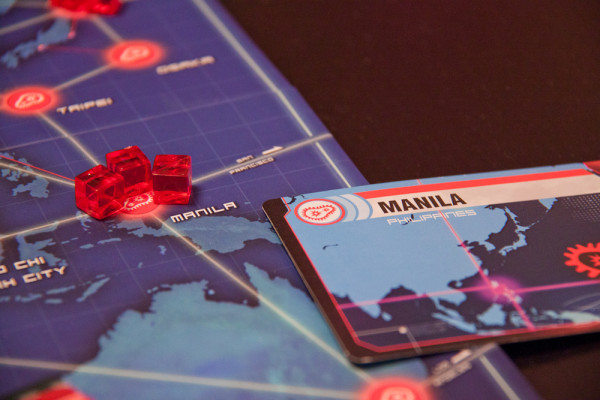 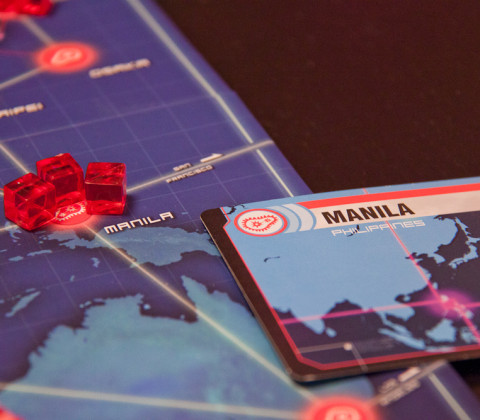 Cooperative style stands as a separate point in the board game resurgence – it is a culmination of the tendency to move away from conflict towards more peaceful competition and collaboration. While the genre has its roots in the 80s (did you know that’s when first version of Arkham Horror was publushed?), one of the games that really brought prominence to the true co-op is Pandemic. Strap on your hazmat suit and hold on to your Petrie dishes, we’re going to save the world!

How it works:
The world is on a brink of a terrible global epidemic, beset by four deadly diseases that area spreading rapidly. Players take on the roles of medical operatives and researchers who will criss-cross the globe working to contain and cure the infections. The primary resource players are working with are cards, each corresponding to a city. The cards allow player to travel, build research stations and ultimately – discover a cure once you collect five cards from the same group. The spread of the diseases is represented by coloured plastic cubes being placed on cities – players spend their actions travelling and curing, removing these cubes to avoid outbreaks. 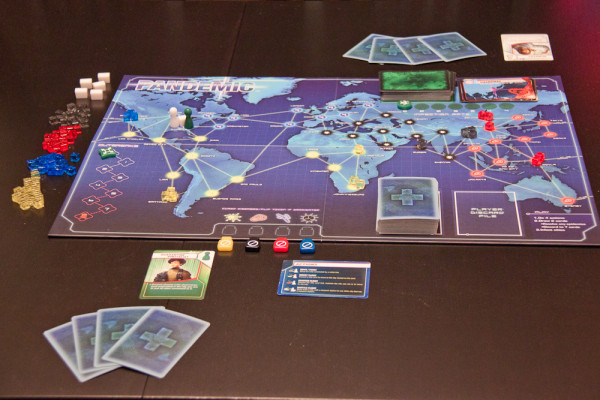 A two-player game of Pandemic all set up to play.

After the player takes their actions to manage the threat, the game retaliates by making more infections pop up in random cities (also determined via card drawing). Any given city can only hold three cubes of a given colour – if another one is added, an explosion or an “outbreak” occurs, sending infection to all cities connected with the one experiencing the outbreak. Allow eight outbreaks and you lose the game. This can happen easier than you think, especially if players ignore an area and allow for chain reaction outbreaks, which can be truly terrible. A game is also lost if you deplete all the disease cubes for any given disease or if you run out of cards – so playing it too safe is also not an option.

Winning the game is achieved by curing all four disease by collecting a set of five city cards of a matching colour and submitting them at a research station. The cured diseases still pose a danger – infections of that type still appear, though they are easier to treat. Only be removing all cubes of a certain colour from the board is the cured disease completely wiped out and does not re-appear. Attempting to eradicate diseases may delay players and prevent them from achieving the primary objective, which is curing all four diseases before the world is overcome. 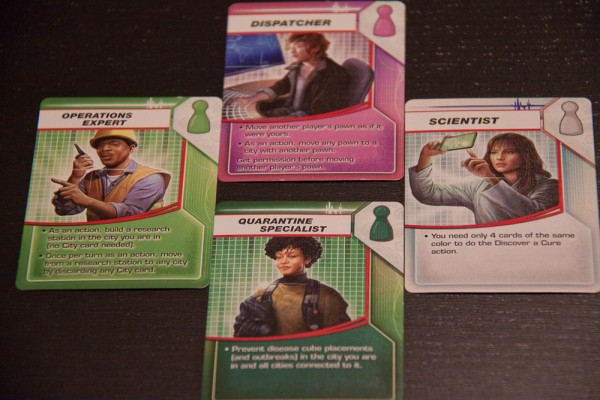 What foul sorcery is this? A successful game that uses a truly diverse cast of characters?

How it plays:
The simple and dynamic engine behind Pandemic functions very well, creating a great flow. Analysis paralysis is possible but unlikely as most of the time areas of priority are clear. The turns go quick and the ever present threat of pulling an epidemic card adds tension.

The players mostly interact through talking and discussion, trading cards is so hard to pull off that it is rarely a viable option (both you and person receiving the cars have to be in same city, matching the card you’re about to trade).

While some games, especially on harder difficulty, can be easily predicted as defeats, most times you can not guess the outcomes, as the game goes down to the wire. The playing time is very manageable, with most games fitting comfortably into the 45 min advertised – Pandemic does not take up an entire night.

Pulling this card when Manila is already heavily infected is bad sign.

The well-laid out rules are easy to learn and the down time is not daunting with the maximum number of players capping out at four.

How it feels:
The game is a great entry point as it has a very favourable ratio of rules complexity to enjoyment. Using only a basic mechanism, Matt Leacock, the talented designer behind Pandemic, managed to create a game that keeps you tense and engaged throughout.

The mechanics are not complicated even for new players and the reference cards provide handy reminders and new players can dive right in. 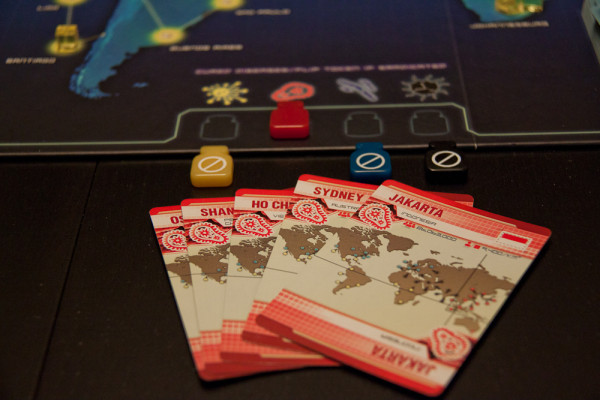 The game does lend itself too readily to the Alpha Gamer ruining the fun for others. Over-helpful suggestions by dominating players can really drain the enjoyment and sense of an active role out of the game. This limits the potential gaming partners somewhat.

The difficulty is modifiable and ranges from gentle to punishing, catering to your group’s level of masochism.

The game does depend quite strongly on the luck of the draw but the absence of dice might make it a good choice for people averse to chance. The unique theme of saving world from disease (ringing a bit too close to home now with the Ebola virus) is a strong point that works well for younger gamers.

Ultimately, the enduring popularity of Pandemic since its release in 2007 should hint at its quality and longevity. While you may move from the base game to other, more complex fare (including he many available expansions) – the original provides a fun, dynamic and tense co-open experience. 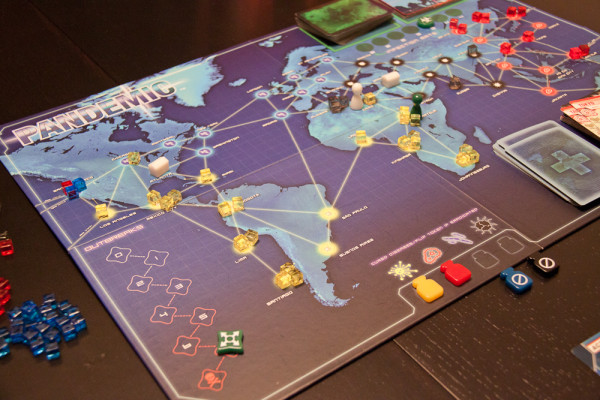 Despite the team’s best efforts, the world is doomed – all yellow cubes are on the board.

Pandemic offers a welcoming blend of tension and strategy in a collaborative environment. As long as everyone is mindful of sharing the decision making and the group finds the right difficulty for their taste – it is a great cooperative game that plays fast, keeps you at the edge of your seat and gets you thoroughly engaged. Learning a bit of basic geography while you’re at it is a nice side benefit too.