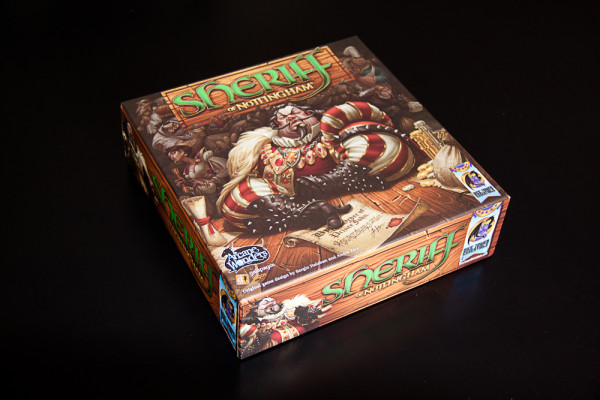 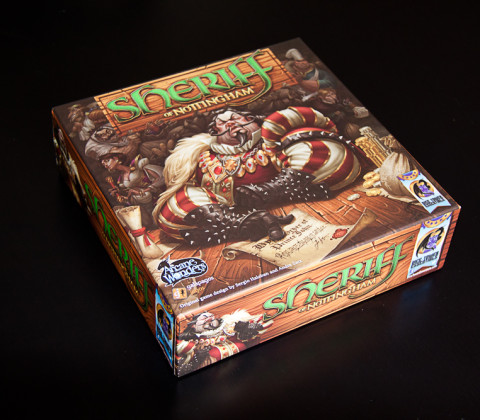 You have seen the situation a countless times in movies and books. A merchant is at the entrance to medieval city with a wagon of wares. A surly bailiff stands in the way. What is it that you are bringing in? Apples you say? These don’t look like apples… Tense negotiations ensue with threats, bribes and flattery all used generously. A nervous glance to the side and the charade is up – bags are emptied and fines (or worse) apply. Sheriff of Nottingham aims to capture this scene and succeeds marvellously, only to forget to reward the players for the most adventurous and fun way to play.

Three to five players act as merchants trying to get goods to their market stalls in a city. In their way stands the Sheriff – a role that rotates between the players. The Sheriff is in charge of examining the goods before they get to the stalls. The thing is – while bringing in chickens or cheese is a perfectly legitimate business – the crossbows or mead just cost way more. So it can be tempting to try and pad your sacks with some highly illegal goods. Only thing is that if you are caught with these – you certainly do not get these to your stall and have to pay hefty fines for even trying. 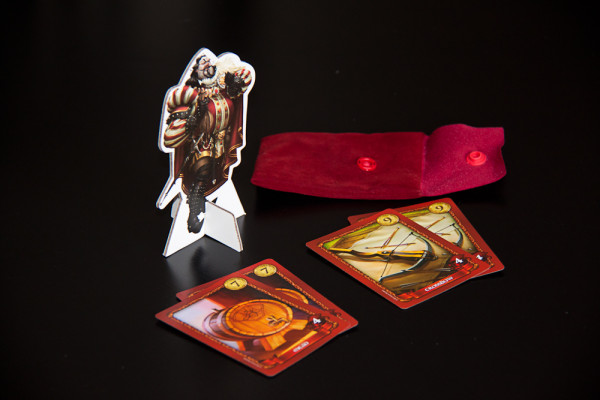 The Sheriff knows when you’re not telling the truth!

Each turn a player puts a certain number of cards from their hand into a small felt bag and declares what type of a legal good is in there. The Sheriff then has a choice – he either lets the goods through (and these are added to the merchant’s stall) or inspects the bag. There is some risk to the Sheriff – if the contents of the bag match the description exactly, the Sheriff looks foolish and has to pay up. However, if there were undeclared, or even worse – illegal goods in the bag – Sheriff gets to collect penalties and all undeclared goods are discarded.

The game encourages negotiation, including bribing the Sheriff with money, goods or future favours. Merchants can even goad the Sheriff into opening someone else’s bag if the desire. The opening of the snap-on bag has a satisfying finality to it – once it’s open, the negotiations die down immediately.

At the end of the game each player receives points for the money they have and the goods they have collected. Illegal goods are worth significantly more points. Those who collect the most (or second most) of a certain legal good are crowned as King or Queen (King of Cheese has a ring to it, don’t you think so?) and receive a hefty bonus to their score. The player who collected the most total points is the winner. 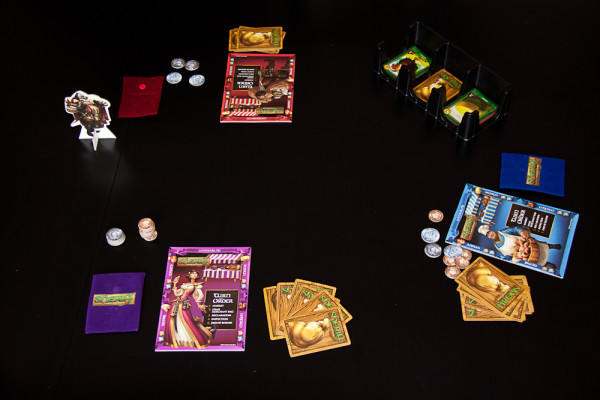 Sheriff of Nottingham set up for a three player game

Fun. Oh, Sheriff of Nottingham is so much fun. The incredible art on the components helps so much in bringing the situation alive. Before you know it, the players who would not come close to roleplaying if their lives depended on it, are speaking in character, praising the fine quality of their chickens. The game is so crucially connected to the social interaction that takes place during the negotiation that it is completely impossible to not get into it.

The game is quick to learn and the turns are not bogged down by extensive analysis paralysis as there is a built-in time limit for decisions to open the bag. The game itself does last a solid hour, but it’s an hour that flies by – the realization that the last turn is approaching invariably comes as a surprise. 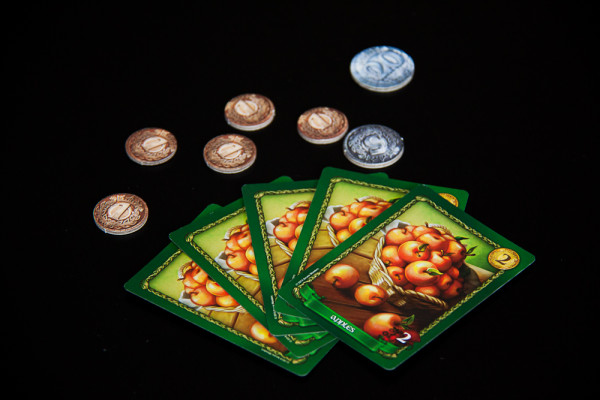 The apples might not cost a lot, but whoever gets the most receives a hefty bonus!

Newer players can jump into the game relatively easily. It is not difficult to get into but being good at it is another matter entirely. Even if you thought you were being the smartest crossbow smuggler in the land, the final scoring is likely to give you a rough awakening and all because of…

Oh, the scoring… For a game that revolves around a fun, breezy premise of bribing a corrupt law enforcer, Sheriff of Nottingham gets awfully bogged down in numbers once the last turn is finished. There are a lot of numbers to keep track of. Specifically, the calculation of King/Queen bonuses for most legal goods can often make the calculation of the final score harder than it needs to be. But that would not be a serious concern all in itself. 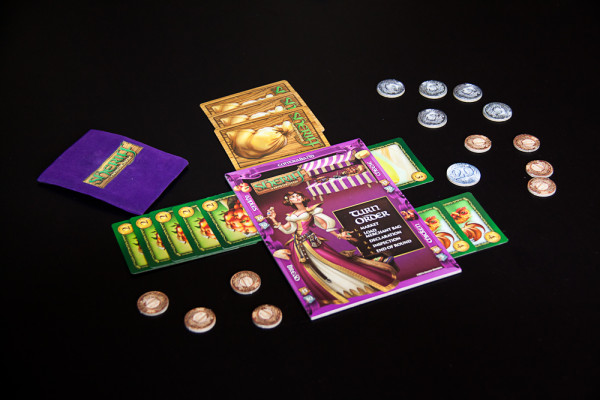 Player area for a lady who’s been diversifying her strategy.

The worst part comes at a point when you realize that the person who won is not the one who was pulling out crazy deals or smuggling in awesomely illegal sexy silks. It is most often the merchant who played safest, not exposing themselves to the risks of smuggling. The game’s scoring appears to reward the safe playing style both through Sheriff penalties for opening an “honest” bag and for significant bonus points for King/Queen title at the end. There are exceptions, of course, but the predominant general experience I had is that slow and steady wins this race.

This is a shame, really. The lying and the bribery and the smuggling are all so entertaining and engaging that you want to do these a lot, but the risks you run far outweigh the potential benefits. There is a ton of very exciting stuff taking place but it is best not to do that if you want to do well. Many people are still able to have a great time with the game because the process is indeed exceedingly entertaining. But for those who want to direct their actions towards a goal – this will be a serious drawback.

The components certainly add to the enjoyment of the game, with the definitive sound of the bag being opened carrying lots of significance. 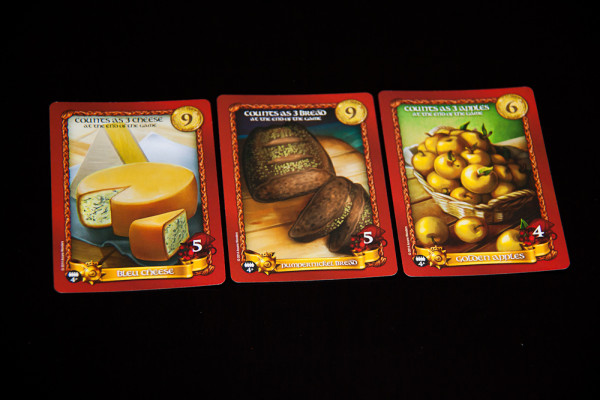 The game also manages to achieve lots of fun without the sort of anxiety you are going to experience in other bluffing games like Resistance – a healthy level of ridiculousness in art will do that.

It should also be noted that players who generally prefer planning and analysis to social aspects of gaming will likely not fall in love with Sheriff, though it’s a game with very broad appeal.

Sheriff of Nottingham provides a phenomenally engaging gameplay for players who dig the social interaction. Inexplicably, its scoring mechanism aims to shoot itself in the foot (knee?) with a crossbow bolt of rewarding a very safe play style. It is recommended to players for whom fun is more important than victory. If that describes you – prepare to describe just how amazing your artisanal cheeses are!

Board Games, Reviews
So Much Gameplay over “A Few Acres of Snow” by Eric MangHarbour review: a silly serious brain burner