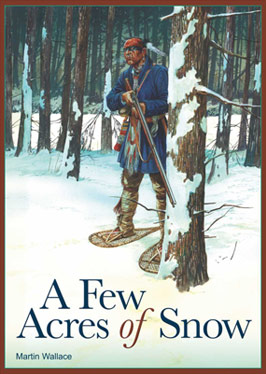 Every kid growing up in Canada learns about the Seven Years’ War (or as the Yanks call it, the French and Indian War), which took place between 1754 and 1763 and involved the British colonies and New France.Many of us even get to visit the Plains of Abraham in Quebec City where the French under Montcalm and the British under Wolfe waged a bloody battle in 1759; consequences of which reverberate through the Canadian and Quebecois psyche today.

I understand that history, never mind Canadian history, can be dull for some. Personally, I love it so much I majored in it, but had I played A Few Acres of Snow as an undergrad, a few dimensions of the Seven Years’ War would have been indelibly imprinted on me. The first is the map/game board. It’s not lavishly illustrated but it need not be. It’s functional and aesthetically pleasing and not crowded. The extant British territory and French Canadian areas of control are clearly marked allowing you to consider expansion. 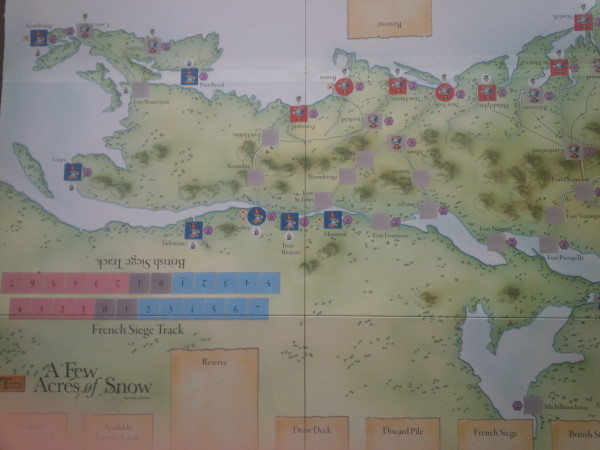 And expand your territory you must.

The French are as you would expect in this battle, under-resourced compared to the British. The red coats start out with more money and more territory. But the French need not be so disadvantaged. For example, the coureur de bois and traders allow the French player to trade in beaver pelts for cash and the money comes in handy. But let’s get to how one expands territory. A Few Acres uses a fascinating, and at first hard to get the hang of, method of settling villages and towns.

The best way to explain is to offer an example. Let’s say you want to establish a French village in Oswego. First, check if you have a card that connects you to that town. Aha! Montreal will get us there and the French start the game with Montreal under its command. You’ll see Oswego listed on the card as a connected town and an icon will be next to that list illustrating how Montreal makes the connection. In this case, we need a bateaux (ie a large wooden boat). Find a card in your hand that bears the icon of the bateaux in the bottom “parchment” area of the card. Play both cards and you can place one of your blue cubes (that is, a village) in Oswego. It’s now yours and you’re a bit closer to the British front. Once you gain a town, look for the card in your location deck, in this case Oswego, and add it to your discard pile. 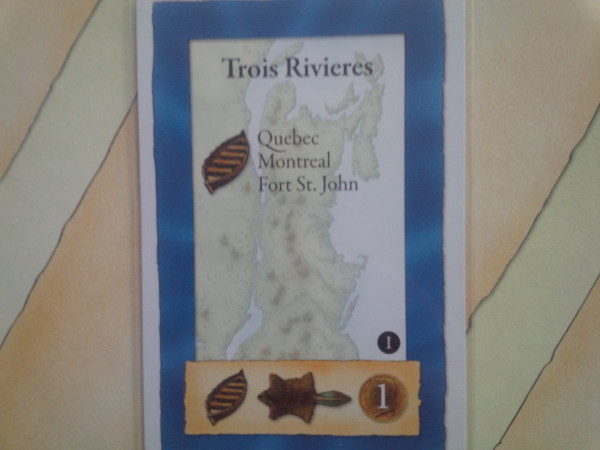 Want to settle Fort St John? You start in Trois Rivieres and will need a bateaux (note the “parchment” on the lower half of the card. This means it will serve as a bateaux, but not the bateaux you need for Ft St John, a beaver pelt, or discarded for one coin)

So why expand and settle?

First, one gains points assuming a point box is next to your conquered town. These points will be tallied up at the end of the game to declare a winner. Second, is that you can set up a front and fortify it (you can purchase a fortify card that boosts the defences of a settlement) and keep your enemy from successfully laying siege to your settlements. You can also prevent raids. 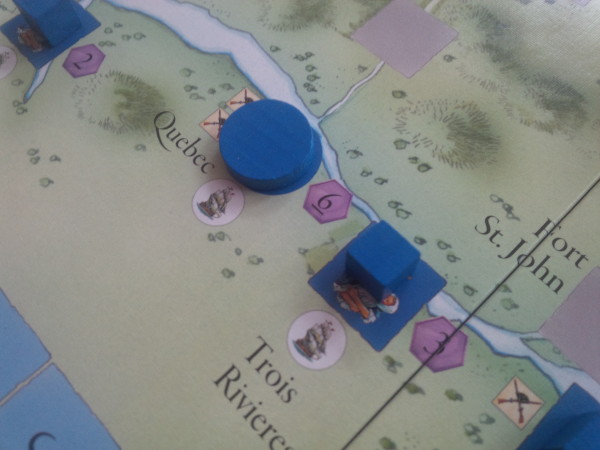 French settlements. At the end of the game, you’ll tally up the points in the purple hexes. If you have a disc on a space, as we see with Quebec, it’s worth double (in this case, 12 points)

Raids allow your opponents to swipe a village cube if you can’t defend it. Your cube enters their supply and will count as points at the end of the game. You’ve also just lost a town…You also want to expand because the location cards of settled towns carry effects such as connections to other towns and resources and/or modes of travel in the parchment area.

How one gains cards and uses them is a delightful mechanic. You start with pre-determined deck and hand of five cards. You may take up to two actions per turn. Once your discard deck is depleted, you shuffle it and it becomes your new draw deck. So, those location cards you picked up, or Empire cards you drafted, or neutral cards you scooped, become part of your draw deck. 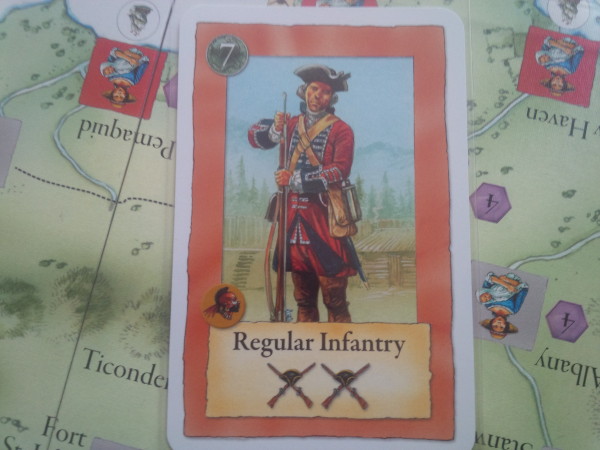 A British Empire card. These cards are open and available for you to add to your deck (British player only, of course! The French Canadians have their own Empire deck). The infantry will assist you in a siege (attacking or defending) and will cost you 7 coins to recruit.

In short, it mimics how slowly resources made their way to the generals but things improve as you build up your resources. Since it takes time to get the cards you need, you won’t be laying siege to Boston in the first two turns. This mechanic is used in variety of games, including my beloved Marvel Legendary.There’s not too much more to the gameplay other than going through the variety of actions you can take on your turn. Better you check out the game instructions online than have me go over those here.

Niche game that may not float everyone’s bateaux
Can be fairly long (admit, not a con for me)
Pre-determined starting cards means the game always starts with the same positions in play (again, not a big deal for me)

I love Canadian history and I feel this game brings the Seven Years’ War to life. I enjoy the richness the mechanics offer and have to admit, I favour playing the French side. So much gameplay over, what Voltaire said, was “a few acres of snow”.

This review was contributed to Altema Games by Eric Mang – our heartfelt thanks.