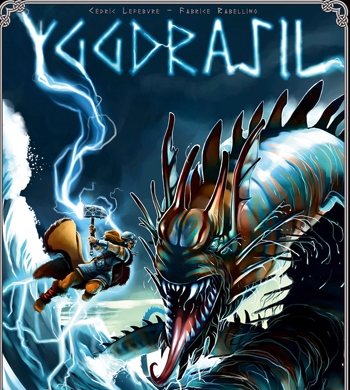 Yggrdrasil is a barely pronounceable cooperative game set in the rich world of Norse mythology. The theme is well realized and the mechanics are inventive, yet the stuttering flow and over-reliance on chance holds the game back from true greatness. Despite its’ flaws, it is a challenging, compact game that will help you practice pronouncing the name of Thor’s hammer in advance of the next Avengers.

Yggdrasil is a name of a gargantuan ash tree that, according to the Viking mythology, connects all the worlds in existence linking the worlds of men with the dwellings of the gods in the halls of Asgard. In this game, the halls of Odin are under attack by the six mythical evils, including the trickster god Loki, the daemonic wolf Fenrir and the world-eating serpent whose name I am not going to inflict on you. All six attempt to break into the gods’ palace and if they are successful, the game is lost.

The players take the role of the gods (base game comes with six to pick from) such as Thor, Odin or Freya. They have to fight off the invasion using legendary weapons forged by dwarves and employing the souls of worthy Viking warriors to aid them in their battles. 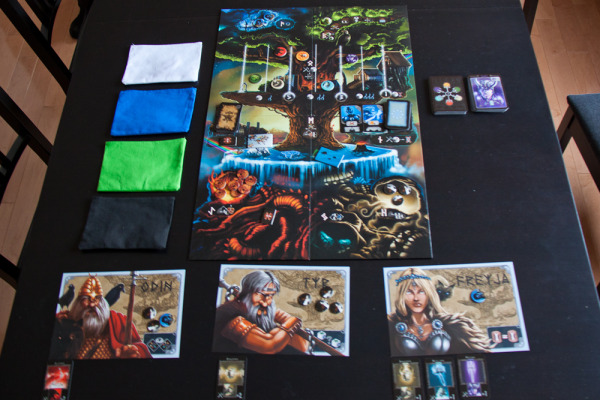 The game is ready – the fate of the World Tree rests in your hands.

The game takes place on a lavishly illustrated game board, showing the sprawling giant tree with the several areas where players can take actions. Each turn, one of the six enemies advances and triggers their unique harmful effects. The player then has three actions to respond. The actions involve battling the intruders (with a victory pushing them back) or preparation for future battles.

The battles require a player to fuel their power using “good” souls – trusty Viking warriors harvested by Valkyries from the worlds of men. Each of the four worlds is represented by a cloth bag containing a mix of “good” Viking souls and “evil” Fire Giant souls. Using one of their actions, a god can send Valkyries to a world to look for worthy souls – a player blindly fishes out three tokens from a bag – any “good” ones can be used and any “evil” ones are returned. 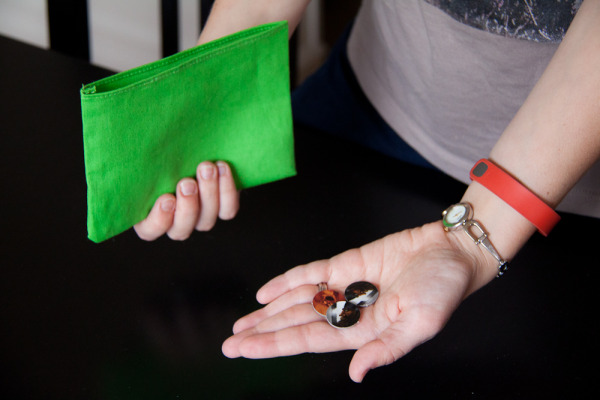 You’ll have to go fish for worthy Viking souls in these bags.

The gods’ battle prowess can also be enhanced by visiting the Dwarves to forge mighty weapons, giving bonuses against specific opponents or visiting Elves to enlist their aid in battle. Finally, a die is rolled for every combat, adding a variable bonus to your power (or as the case may be when you really need it – not adding anything at all).

There are several ways to lose the game – either one enemy goes to the very end of the 8-step track leading to the halls of Odin, or you let a set amount of enemies close enough to the palace of the gods. If you go through the entire enemy deck keeping the evil gods at bay – you are victorious.

Yggdrasil is an exercise in risk management – the more time you spend preparing to fight, the higher your chances of success as you equip yourself with mighty weapons and gather allies. However the enemies become more powerful as they advance – wait too long and the challenge will become insurmountable.

The most reliable way to boost your fighting chances is to recruit the Viking souls and to do that reliably you must manage the contents of the four bags – the four worlds of men where you can send your Valkyries for posthumous recruitment. The game offers several interesting ways to help you do that – you can either add “used up” Vikings back to bag to increase your chances of drawing what you want, or to randomly take several tokens from the bag and discard any “bad” souls, thus decreasing chances of recruiting a dud. The game also has a way of preventing you from focusing on just one world – the world-eating serpent may make it inaccessible and all your efforts lost, so you have to diversify your actions.

There are many things to take into account as you play Yggdrasil – the relative positions of the enemies, each god’s equipment and special abilities and availability of Viking or Elf souls. 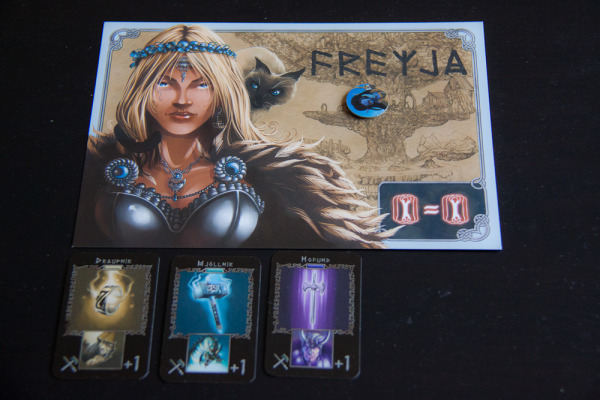 Freya, the goddess of fertility is well equipped to defend Asgard.

The game accommodates one to six players and its’ difficulty grows the more players are involved. The games are relatively quick – low-player games are over in just over an hour, going up to hour and a half if you have four or more players. Given its’ co-operative nature, the game is prone to over-controlling alpha gamers spoiling the fun by trying to be in charge. There is no in-game player interaction, further making the game feel like a multi-player Viking solitaire. Discussions, while fun, may take too long, robbing the game of some of it’s’ flow.

The luck factor, present mostly in the form of a devious die, is strong as a series of good rolls may replaces planning and preparation. The game is reasonably challenging and new players can expect to lose more than they win, especially early on. 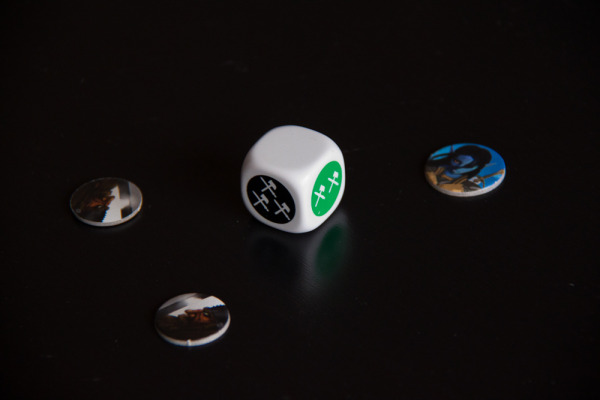 This die has something against human players – you will see this empty side up a lot.

Yggdrasil is a game that sets up very high expectation with a rich theme and gorgeous board, but does not quite live up to these. The gameplay flow is frequently interrupted by player discussions, that can lead to some light analysis paralysis – it doesn’t drag out the games, but makes the game feel less dynamic. With its’ reliance on controlling probability and at the same time being dependant on good rolling – the game is decidedly more analytical than you would expect from an offering with Thor hammer-smashing a giant serpent in the face.

The game’s end, especially victories do not feel especially satisfying as you are just running out a deck of cards, while at the same time losses can leave you feeling powerless. There is a point where it becomes clear you are in no position to win and the game does not offer too many opportunities for catching up. 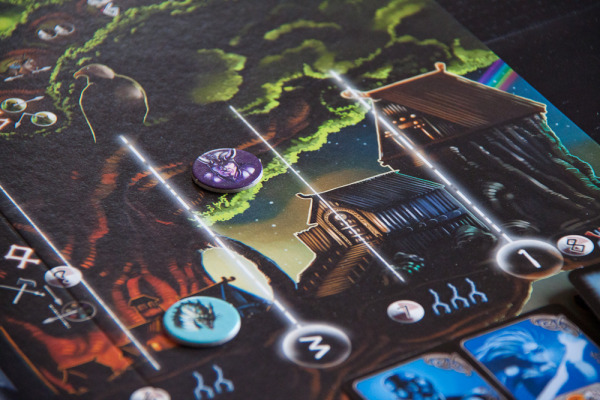 Loki the trickster god is about to knock down the gates of Asgard.

There is definitely more good than bad though – the game’s many systems click together well, creating many unique and interesting possibilities. For example defeating several of Loki’s minions – Ice Gians – unlocks pieces of powerful Runes – put one together and you receive an extremely powerful benefit, bringing great excitement and boosting your chances at victory. The soul-collecting mechanic is clever and works well. The cruel die’s whims can be mitigated to some extent. The names on the cards help bring the rich world to life.

Yggdrasil will satisfy fans of Norse mythology and those who like the thrill of not being in complete control of their destiny. Engrossing theme, inventive mechanics and a cohesive system make it a solid game. Uneven flow, a higher than expected level of abstraction and over-dependence on luck may detract from its’ appeal for some though. Recommended for small groups of advanced gamers looking for a reasonable challenge or as a solo game to be enjoyed with a mug of your favourite Viking mead.

Board Games, Reviews
Elder Sign: Omens – Lovecraftian horror for your mobile deviceAgricola: All Creatures Big and Small – A big game in a small package