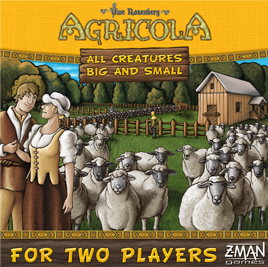 Agricola: All Creatures Big and Small – A big game in a small package

Creating a game that is short and simple, yet complex and rewarding is no easy fit. Agricola: All Creatures Big and Small carries a title that is a bit unwieldy and long but behind this deceptively awkward name hides a gem of a game that is tight, quick, challenging and makes you want to set up again as soon as you are done.

Where it comes from:

All Creatures is a spinoff of the base Agricola – a beastly worker placement game from German designer Uwe Rosenberg that represents a major milestone in designer gaming. Released in 2007 and still occupying lofty #4 on www.boardgamegeek.com, that simulation of running a farm became known for very little dependency on chance, a plethora of choices and giving you grey hair from worrying that you are not going to be able to feed your family. (The stress part is hilariously demonstrated in this Board with Life video).

All Creatures is a 2-player only spinoff that focuses solely on the animal breeding aspect of the original. It comes in a small box good for travelling, has a very manageable footprint and is over in 30-40 minutes.

The game consists of a game board with several action spaces for collecting resources, building structures and obtaining animals. Each player has three pawns to assign to these spaces to take advantage of their effects. The resources are represented by smaller wooden pawns, while the animals are realized as charming meeple-like figures of sheep, pigs, cows and horses. 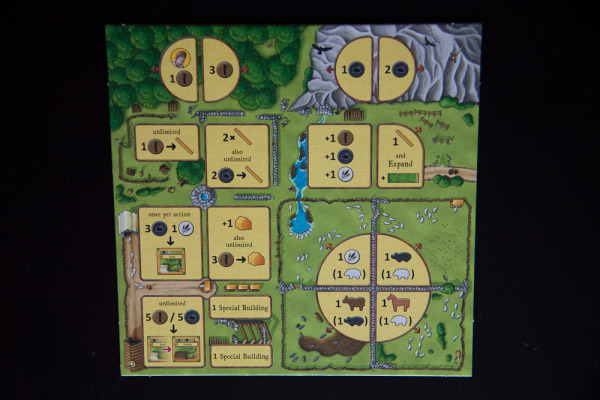 The small and simple board hides impressive tactical depth

Each player has their own plot of land that they use to construct buildings or build fences around their land. Fenced-off pastures and buildings can house a certain amount of animals. Improving buildings increases the number of animals these can accommodate. Having at least two animals of the same type produces more “babies”. At the end of the game the animals score you points based on how many of each kind you have. Whoever scores the most points after eight rounds of play is the winner.

Two-player only. Non-expandable board with just 16 action spaces. Sure makes it seem like a restrictive game. It comes as a wonderful surprise that with such a small array of options, Agricola: All Creatures offers players many viable strategies, each with pros and cons, requiring adjustments to the actions of the other player, requiring planning and foresight. The game strikes an excellent balance of presenting you with a choice of a few actions that make sense – rarely do you find yourself with nothing beneficial to do or with an overabundance of choice. 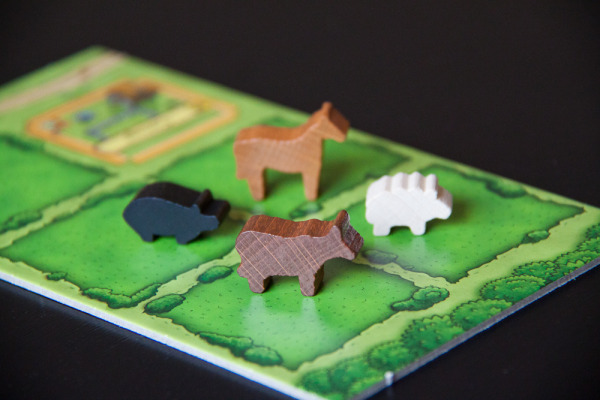 I dare you to not fall in love with the tiny wooden animals!

The turns go quick and it is rewarding to see your empty plot of land populated with livestock and buildings. While the beginner players will be mostly focusing on their own farm, sabotage is also possible. If it is fairly clear that your opponent is stockpiling wood in order to build a ton of fences – blocking the action space allowing them to do so is a sure way to ruin their plans.

The game delivers on its’ advertised short running time even for inexperienced players. The games feel brisk, engaging and fun and the scoring is quite simple, taking up only a couple of minutes.

The game flows beautifully, allowing you to meaningfully plan and strategize without being a math exercise. It will take a couple of plays to be comfortable with the game – to get a good understanding of how scores are calculated so that you can play to maximize your result. Because of the total absence of luck – there is some opportunity for very uneven victories, making it a little hard on the newcomers.

The conflict in the game is never overt or confrontational, lending the game a nice peaceful pace, especially combined with the serene farming theme. 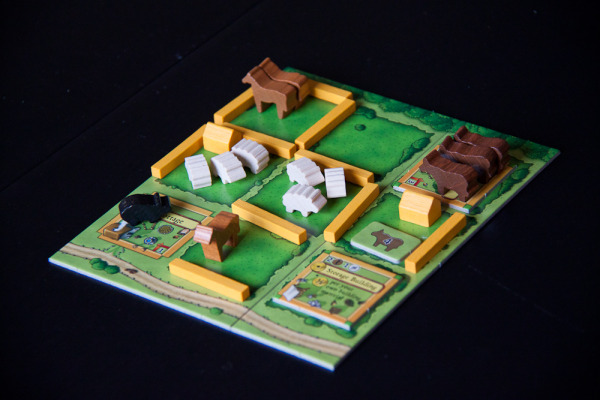 A well-developed farm is a pleasure to look at.

The scoring, while simple, allows several paths to victory, leading to interesting experimentation and honing of strategy, making your playing style grow and evolve with every game. However, because it is not a large game – after repeated plays it will get somewhat repetitive as patterns of play become clear and obvious. The game has plenty to offer before this threshold is reached though and expansions offer welcome variety once you grow overly familiar with the base game.

The uncomplicated rules and scoring makes Agricola: All Creatures a good fit for newer players, while variety of strategies will engage veterans. The animal meeples shall be loved by all.

Agricola: All Creatures Big and Small is an excellent product – it is a reasonably large game in a tiny box. Its’ parts come together for a smart, engaging and variable gaming experience that will especially be enjoyed by gaming couples. The compact format makes this a great travel game for your next trip with a significant other.

Board Games, Reviews
Yggdrasil review: Ragnarok and rollScoundrels of Skullport: Dark Side of Waterdeep