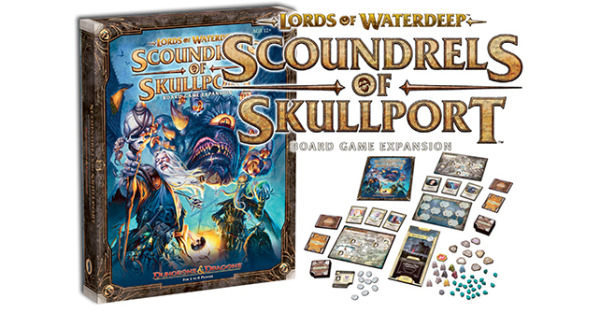 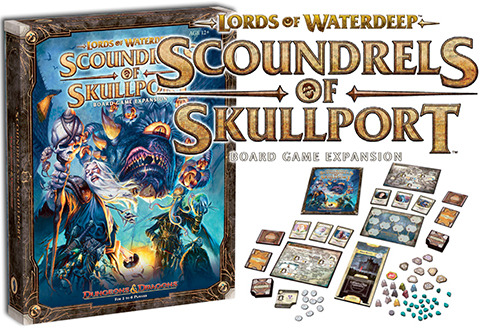 Scoundrels of Skullport: Dark Side of Waterdeep

Following up on the success of Lords of Waterdeep, Scoundrels of Skullport is a two-part expansion that increases the maximum number of players to 6 and offers very different ways to enhance the base game. One expansion, the Undermountain introduces increased use of intrigue cards as well as complex and extremely rewarding quests. The other, Skullport explores the darker side of the game and adds a key new element to the game – Corruption. While the quality of the two expansions is not even, the package as a whole provides a solid addition to the base Lords of Waterdeep making a great game even better.

The expansion, slightly smaller than the original Lords of Waterdeep, allows you to add either one of the new modules (Undermountain and Skullport) or both of them at the same time. Each of the modules comes with a new auxiliary board that provides additional spaces for agent assignment, new set of buildings, quests, intrigue cards and three new Lords cards with victory conditions specific to the expansion.

You can either pick one module to add and shuffle in all the components, or add both at the same time, discarding a certain number of cards from the base game to keep things manageable. In order to play with both expansions at the same time, you have to use the “longer game” option that increases the duration of the game by giving each player an extra agent right off the bat and making it possible to play with 6 people instead of 5. 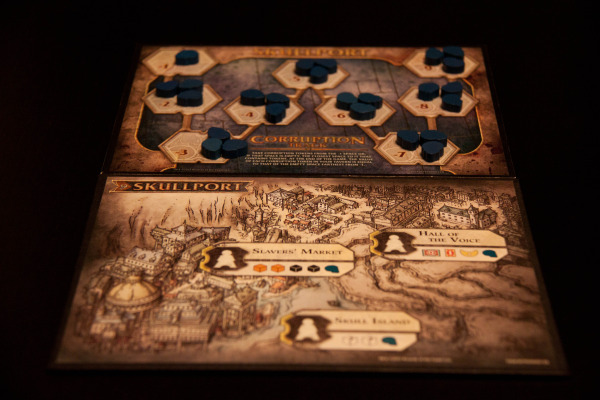 The new locations for Skullport expansion and the Corruption board.

To accommodate the increased player count, the game includes a new faction (Grey Hands) with 6 agent meeple as well as an extra meeple of colours in the base game.

The game with both expansions in takes roughly 30 min longer than the base game, clocking in at 1.5-2 hours. This time requirement increase moves it squarely into the “feature game” territory in terms of length and complexity.

The two options provided by new modules are very different.

The Undermountain is most reminiscent of epic-level campaign in a Dungeons & Dragons world. The stakes are higher. The abilities are higher. There are crazy quests that award you with 40 points (the base game maximum was 25). Intrigue cards fly left and right as new locations make it easier to both acquire and use these. An interesting new mechanic has players assign extra resources to different spots on the board so that the next time the space is used – it yields something extra in addition to the regular rewards. Ultimately, it adds variety but also creates a sense of wild swings in game balance. 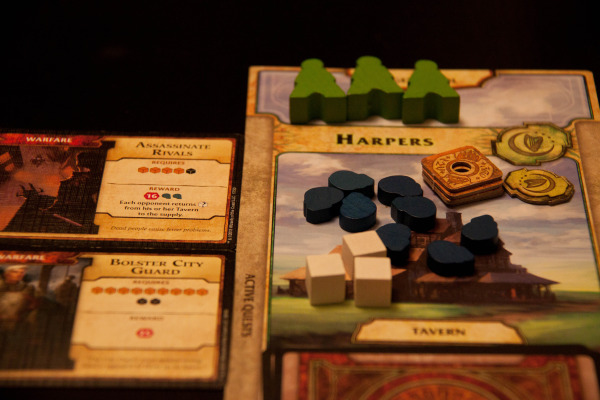 The Harpers amassed quite a bit of corruption – and they didn’t even assassinate any rivals yet!

The Skullport module adds two new boards. One contains the new action spaces, all of which provide much higher rewards than those in the base game. The setback is that these actions also saddle you with Corruption – a new negative resource represented by small blue wooden skull tokens. At the end of the game the players are penalized for each Corruption token, they have and the penalty size depends on how much corruption was accumulated by players as a group. 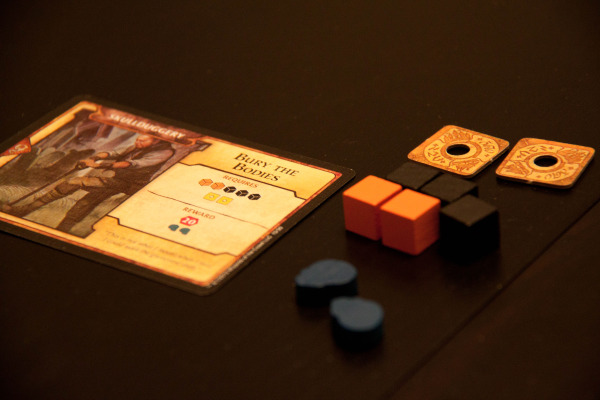 Burying the bodies is relatively easy for a high reward – but it requires getting your hands dirty!

The corruption mechanic adds a strong new dimension to the gameplay. New cards and buildings allow you to both get rid of corruption by repenting your sins or donating to charity or to take on more corruption for short-term rewards. The game benefits from the change as players consider whether it is worth getting their hands dirty to get ahead – it adds another layer of strategy to the already rich base game.

This expansion has a unique effect. First – it is not a mandatory addition (unlike Wizard’s Tower for Castle Panic). The base game, balanced and quick still stands strong as a worthy offering and sometimes you will want to experience just that, especially when playing with new players.

Adding just the Skullport expansion turns it into a new game – one with more risk management, darker tone and slightly more backstabbing. It is richer; more involved and requires a bit more of an investment of time and concentration. 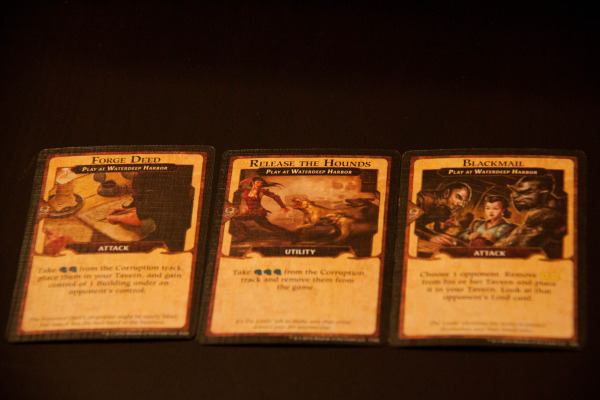 Blackmail, Forgery and Releasing the Hounds. Mr. Burns would be proud.

Finally, throwing in both new modules at once creates this epic-level experience with a ton of options and things to consider. It lasts a reasonably long time and ventures far from the compact format of the original, but offers an even more variable and exciting gameplay.

The weakest part of the expansion comes in the form of only adding the Undermountain expansion. Without as significant of an addition as the Corruption mechanic, it feels cumbersome, adding complexity without the reward and throwing things off balance. Pass on that option.

As a whole, if you enjoyed the base game and it left you wanting more – this double expansion is a must buy. It provides you lots of flexibility in how you want to enjoy this fantastic game.

Board Games, Expansions, Reviews
Agricola: All Creatures Big and Small – A big game in a small packageLords of Waterdeep: Worker Placement in City of Splendors