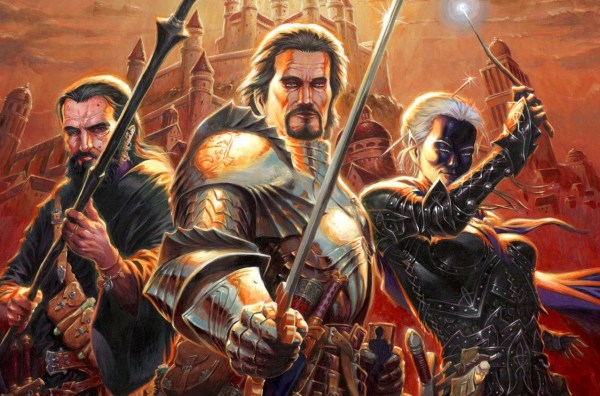 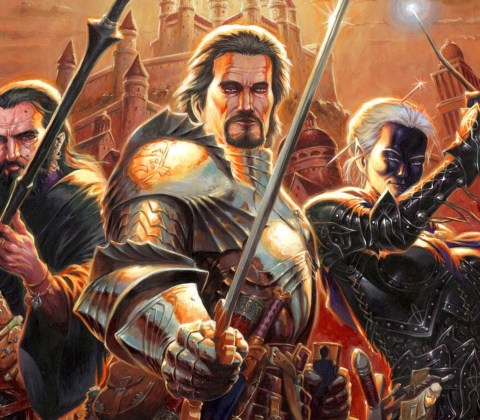 Lords of Waterdeep: Worker Placement in City of Splendors

What happens when you combine a mechanic popular in dry economic resource management games and one of the most established settings for the geekiest game of them all – Dungeons & Dragons? Few could have predicted that the result will be such a light, welcoming and ultimately engrossing game as Lords of Waterdeep. Through beautifully intuitive graphic design and non-confrontational competition, this game earns high praise for strategy, replayability and most importantly – being a lot of fun.

Lords of Waterdeep is a medium-light worker placement game set in the City of Splendors – a fictional metropolis created for one of the many worlds of Dungeons and Dragons. Each of the 2-5 players takes on a role of a Masked Lords of Waterdeep (their anonymity is considered to boost both neutrality and security according to lore). A large board representing the city acts as the main playing field. Assigning their agent meeples to different buildings around town, players recruit adventurers and collect money to be stored in their home base tavern. Small multi-coloured wooden cubes represent the adventurers you recruit, offering a pleasant tactile sensation to handling the bits.

The adventurers and money are used to complete quests and scoring victory points – the ultimate object of the game. As the game goes on, players attempt to acquire the adventurers they need, while blocking others from what they desire. Importantly, the complement of buildings available can be expanded by building new additions – this ensures strong replay value, as your options are different form game to game. While the quests remain open, each player is holding on to several Intrigue cards that introduce unique effects to the game and add an element of secrecy and unpredictability. 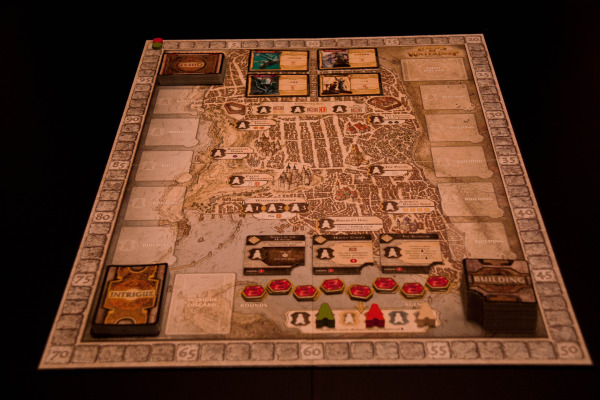 The City of Splendors with all its wonders and intrigues is waiting!

At the end of the game each player reveals the secret identity of their Masked Lord, scoring additional points for their achievements during the game (mostly consisting of completing quests of a specific kind). The points are tallied and the player with the most points emerges victorious.

The game is extremely easy to explain due to the efficiently simplistic iconography used on the board. The effect of assigning an agent to each building is clear even to a new board gamer and that makes the learning curve very welcoming. Even though each player’s active quests are visible to all, the game is more about scoring most points for yourself, not preventing others from doing the same (this becomes less true for players who are very familiar with the game and take it to the next level). This creates a very smooth, peaceful competition that is only rarely interrupted by assignment of a Mandatory quest to an opponent – one of the few openly aggressive manoeuvres available in the game. 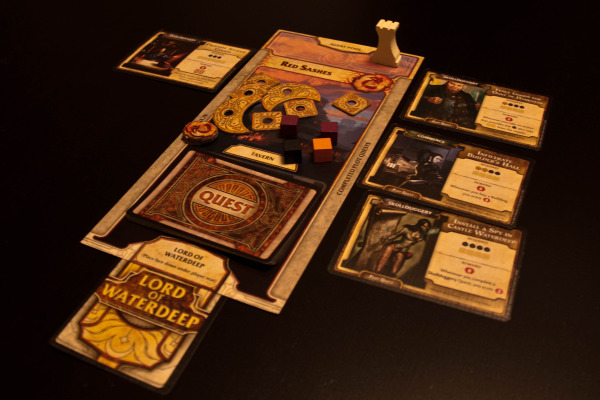 Player area with active quests, gold and adventurers in tavern. Quite a fortune in gold pieces!

Planning and executing a strategy is very fulfilling as you can see the pieces of your puzzle clicking in place – the game offers many opportunities for effective contingency planning and combo creation. The expansion of the starting structures with the additional building also creates a nice visual for the city’s development.

The game takes a bit longer than the advertised hour – perhaps only two-player affairs fit within that timeframe. Additional players prolong the game with a five-player games often running closer to two hours. It rarely feels slow with a committed group though as every decision is relatively quick with only minimal potential for the dreaded analysis paralysis.

There are no dice in Waterdeep and so the only luck factor comes in through luck of the draw when taking cards. It does mean that those who prefer planning to blind luck will be satisfied with the flow of the game. Importantly, the game does not sacrifice excitement in this trade off – pulling off a complex sequence of actions is every bit as exhilarating as rolling high. 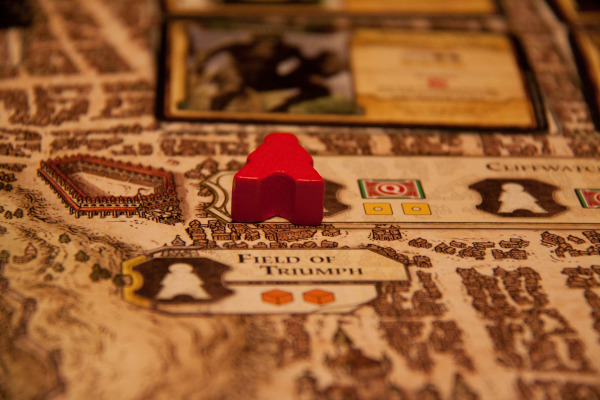 The fantastically detailed game board brings Waterdeep to live.

The game rewards planning without either requiring hardcore math skills or introducing extreme complexity and would be appealing to a wide variety of gamers. Both those looking for a next step into the hobby after a gateway offering and seasoned veterans will find something to enjoy. Its’ charms do wear off with time, especially for more experienced gamers, but the mileage you are able to get out of it is significant.

The game scales very well – in fact it is among my favourite multiplayer game to play as a two-player. Different player counts introduce different strategies, further adding to the game’s lasting appeal.

The theme application is also very successful – it is appropriate and logical enough for D&D fans to recognize familiar deities and monsters. For those who do not even want to know how an owlbear looks like – the game works perfectly well as an abstract. You can play the whole thing without remembering that the white cubes are priests. Those who come looking for a classic D&D experience will be left disappointed though – this is a very strategic game and does not include any roleplaying to speak of.

Lords of Waterdeep is an excellent marriage of theme and mechanics, just enough complexity and intuitive design. A game will be accessible to relatively new players and will excite those looking for a strategic experience not swayed by luck. Its medium running time makes it meaty enough as a gaming night’s main attraction and one of a series of medium-light games to be enjoyed by a dedicated group. It is highly recommended for its broad appeal, engaging gameplay and strong replay value.

Whatever you do though – keep the box upright! If turned upside down, all the perfectly stacked components come flying out of their meticulously prepared slots and require a lot of patience to put together afterwards.

Board Games, Reviews
Scoundrels of Skullport: Dark Side of WaterdeepThree reasons I have a man crush on Ignacy Trzewiczek