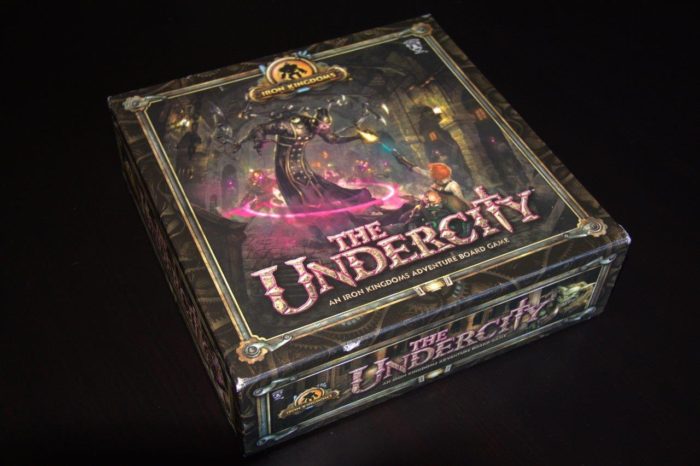 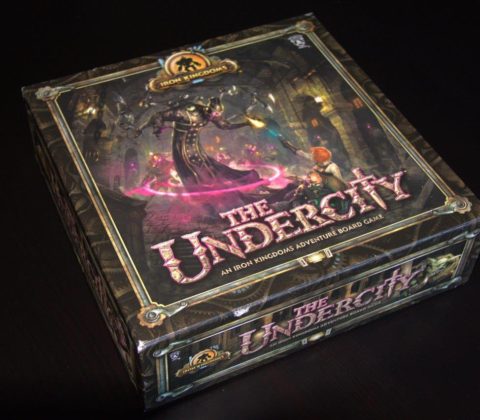 The Undercity Review: A bumpy descent

Down in the titular Undercity – a setting for Iron Kingdoms games, mad alchemists concoct pungent elixirs, trollkin and bodgers sharpen their rusty blades, huge steamjacks whir into motion and an ominous threat is rising. You are invited to play out a series of adventures in this rich world with a bunch of dice and extremely detailed miniatures. Will your experience be as good as the grotesque art promises? Strap on your gas mask and load your magelock pistols – we are about to find out!

The Undercity is a cooperative tactical adventure game for 2-4 players. It comes with four playable characters and a series of seven scenarios forming a campaign. The board is set differently for each scenario, using cardboard terrain tiles and miniatures to create environments where your adventures will take place. The game comes with a dozen types of monsters and new ones join the fray every turn. It is up to your characters to fight off the hordes while striving to fulfil each scenario’s unique objective.

After each character’s turn, the monsters get their own go, activated according to cheat sheet that lays out their internal logic (e.g. “makes a ranged attack if there’s a hero within 1 space, moves towards heroes otherwise”). Once an objective is fulfilled the heroes are victorious and can move on to the next scenario. If all heroes have been defeated or a loss condition has been reached – the heroes lose and the scenario has to be replayed. 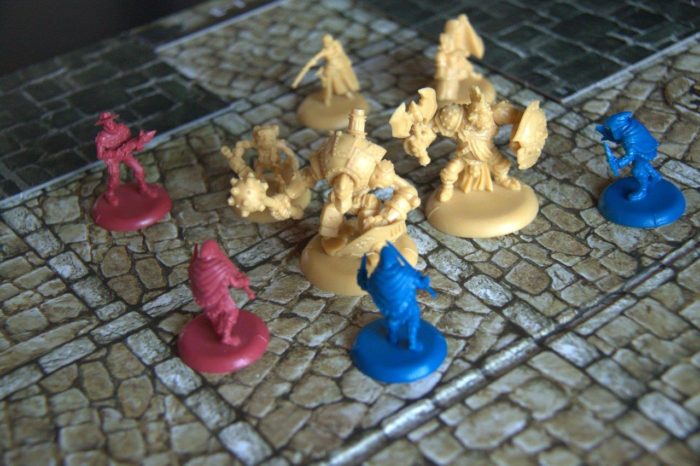 These ambushing thugs don’t know what they are getting into!

Each game features either 3 or 4 characters (if played with 2 players – each controls 2). Each of the playable character is very unique both in their own right and in terms of being different from other options. There is a knife-throwing, grenade-chucking alchemist, a little goblin-like creature and his huge pet steam-powered robot, a deadly sorcerer with an enchanted pistol and their fearless leader – a towering, regenerating troll-like warrior.

Characters gain experience between successfully completed adventures and can buy new abilities, customizing and empowering the character. The map also contains triggers for small side quest cards that contain either other items to discover or small additional stories to explore. 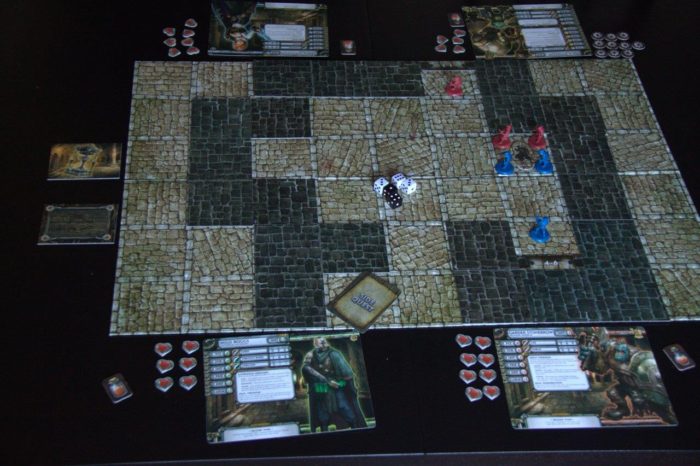 The map is laid out for the initial descent into the Undercity.

All action resolve with rolling a bunch of dice, determined by your character’s abilities, making reliance on luck a big part of the game. In addition to base abilities of each character they receive a deck of Feat cards that are regularly drawn that can activate additional unique effects that help you bash heads.

Each session, lasting about 2 hours, is preceded by a page-long, well-written intro that sets the stage for the adventures to come and flesh out the characters. The story deals with investigating attempts to smuggle and use a harmful substance that creates a new dangerous type of enemy. It is best described as functional and not getting in the way. A more critical assessment would be boring and entirely forgettable.

The game really focuses on tactics and offers a good, very social opportunity to plan and execute together. Dice rolls can provide both moment of despair and joy – whether reliance on randomness is a good thing or not depends entirely on the player. The game does offer several ways to manipulate / mitigate the rolling so it is not all blind reliance on chance. 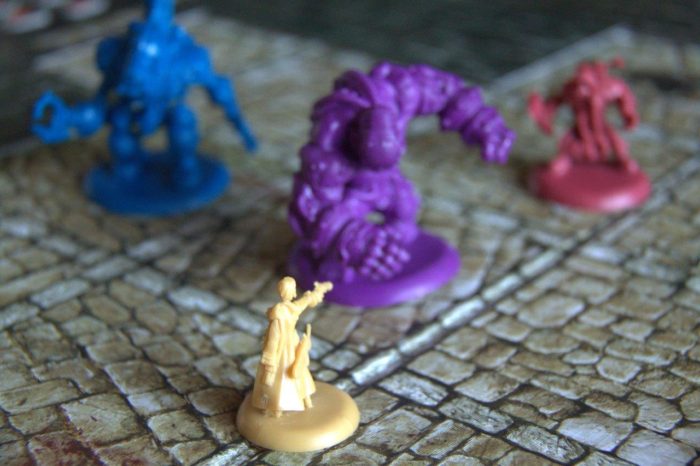 The duelist stares down her adversaries, magelock pistol at the ready.

The games usually start off with a great deal of excitement as you get submerged into the amazing setting (The Undercity is a very interesting place that I want to explore more in better-written stories). You get a new set of abilities, new enemies to face and there is usually a good sense of challenge and eagerness to try your mettle. The game, however, overstays its welcome and not in a good way as many of the battles become tedious due to lots and lots of rolling versus continually respawning enemies.

While there are several action options available – these do end up getting tiresome towards the second hour of playing, especially if things are not going well and you feel the scenario will need to be replayed.

The rules are another weak point of the game. Both the structure of the rules and the way these are described could have been made easier and more approachable. The logic of monster’s activation for example, while not complex, is written in a way that was difficult to remember and constant references to the cheat sheet and rulebooks were necessary even towards the last games of the campaign (nearing 10th play). Things are further complicated by custom rules that exist for specific scenarios. Keeping it all in mind, while planning your tactics does get a little confusing and in my experience – detracts from the enjoyable action and the immersive setting. 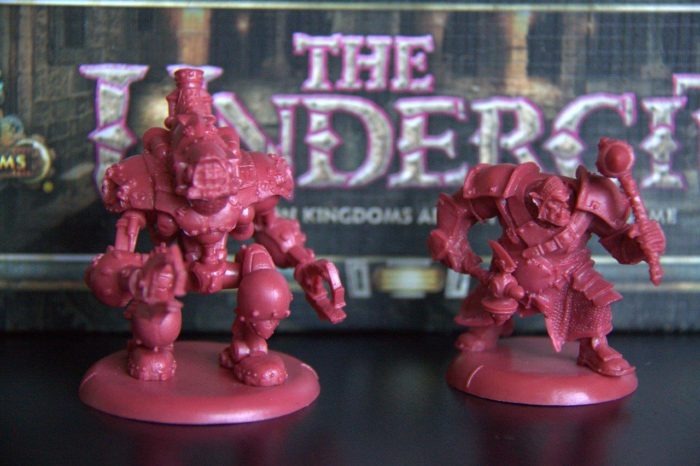 Miniature closeups – you will never look at diving equipment the same.

The component quality is uneven. While minis (unpainted resin, finely detailed) are of very high quality – the cardboard and cards are flimsy and scuff/get deformed easily. I found that to be a disappointment for an expensive game. The exceptional art on the cover and cards creates an expectation of a premium product and the cards and tiles just do not live up to it. The art on the board and tiles is blander, but serviceable and does not get in the way.

The game is of medium difficulty, providing a good challenge that does not feel unfair. However, in pursuing the game’s objectives – the players rarely feel like they have the luxury to explore the side quests available. This made me feel like we missed out on a whole aspect of a game because it did not make sense to risk defeat for it.

Ultimately, the Undercity is not a bad game by any stretch of imagination. Despite its flaws I had an enjoyable time playing through the campaign and was looking forward to new challenges. While I am not compelled to immediately play another campaign (far from it) – it will stay in my collection because I do want to go through it again, focusing more on side quests and trying different character development options. 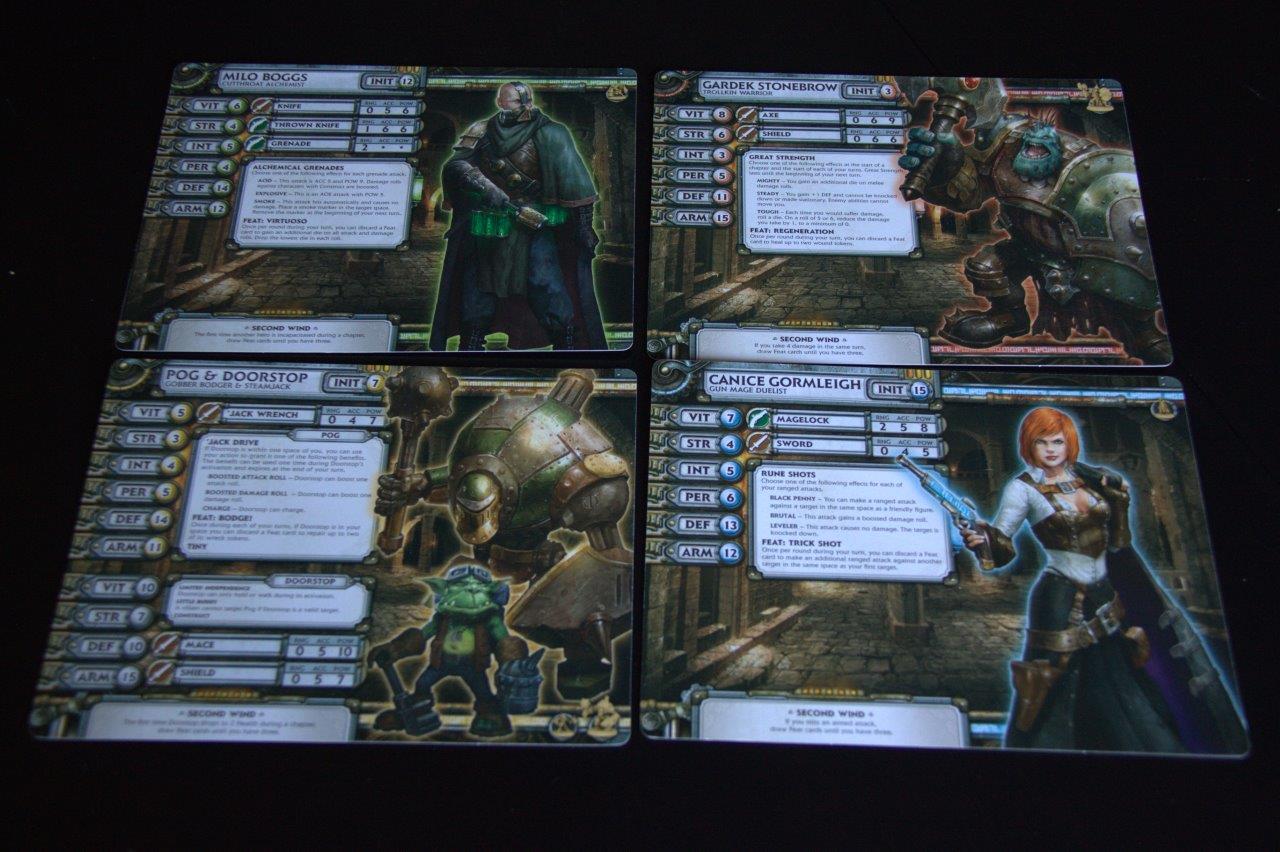 The original and diverse cast of protagonists.

The Undercity offers a tactical combat with excellent minis and wonky rules in a fantastic setting. If you don’t mind loads of dice rolling and a banal story but are excited by lots of action, original characters and their customization – this is a game for you. Those looking for tight rules, involved plot, deep strategy or quick games should look elsewhere.

(My friend Eric offered to supplement this review with his own impressions so you get two takes on it for the price of one! Imagine the savings!)

Take me down to the Undercity, where there ain’t no grass…

Since Artem and I played this together, we thought it would be interesting to write back-to- back reviews of our experiences with Undercity. I could save everyone the pain of reading through a long post simply by agreeing with everything Artem says. And I do pretty much agree with him. 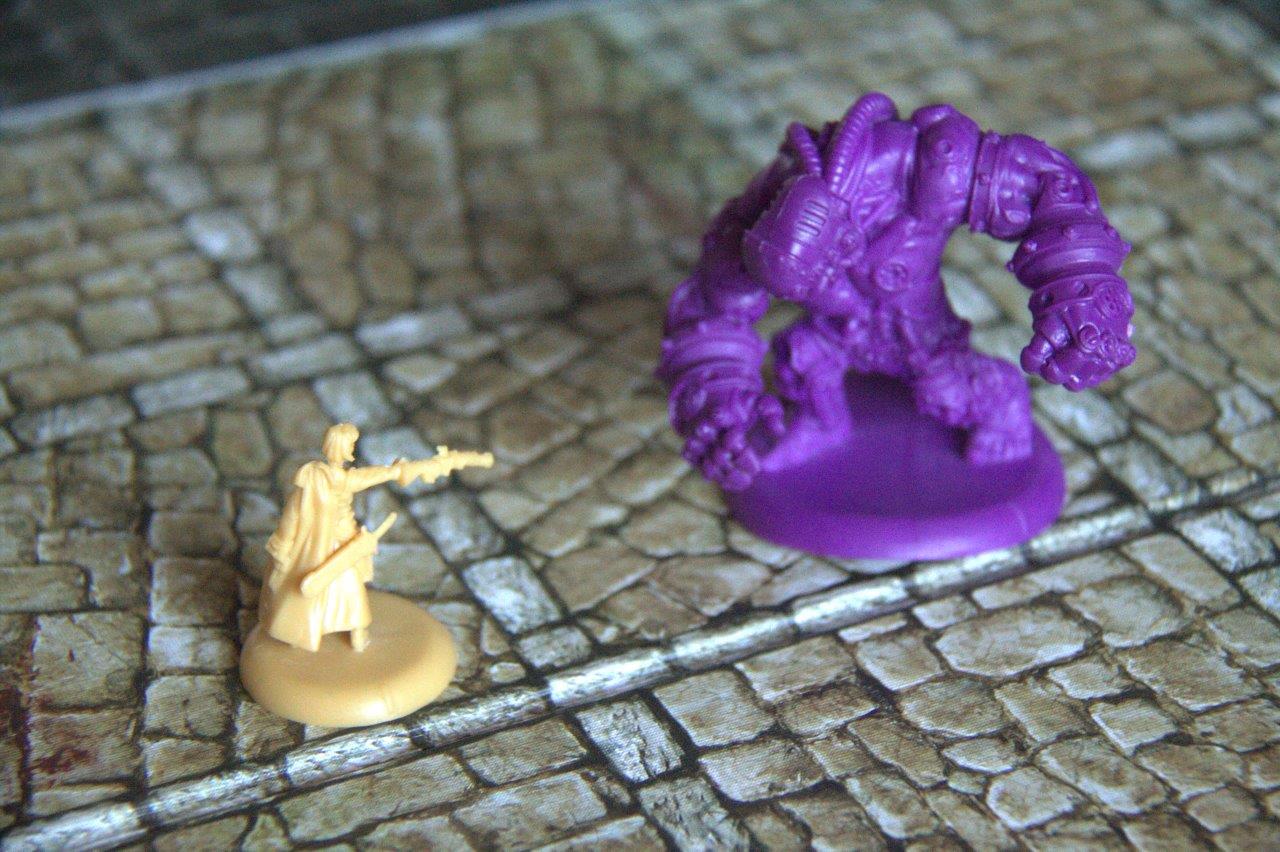 But let’s not stop there. I do have few supplemental points to make.

First, Undercity is good but it’s not great. In addition to all of the minuses enumerated by Artem, I didn’t really feel the theme as much as I wanted to. The bad guys felt like a nuisance rather than a creepy threat (didn’t help that Artem and I misread the rules and played on nightmare mode for most scenarios– that is, the bosses activated far more often than they were supposed to) and there were times when spawning felt unfair (because we had just completed a task) or meaningless (because spawning more foul beasts didn’t fit the story).

Second, the story was convoluted at times and I forgot the whole point of the scenario. “Beat bad guys” seems tedious for a story-based game. 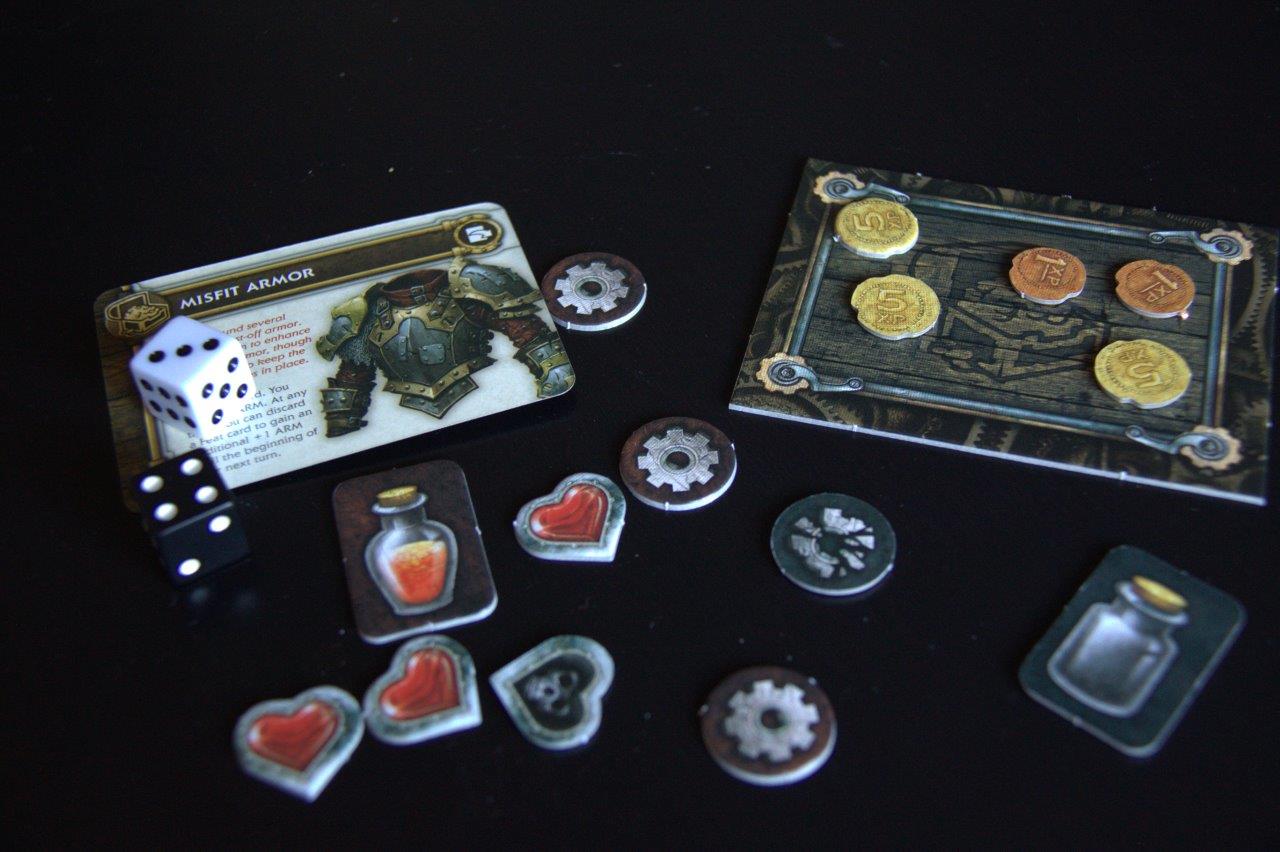 The many odd bits that round out the Undercity’s component list.

Third, if the occasional humdrum elements of the story weren’t enough, I concur with Artem that we could never spice things up with a side quest because the chaos of the main quest kept us far too busy.

I realize at this point it sounds like I didn’t enjoy Undercity. Despite what I’ve written, I actually did look forward to getting this to the table, but it all had to do with whom I was playing with. If your teammates don’t take this game too seriously, if you strategize well together, if no one feels the need to be the game alpha this can make for an entertaining evening.