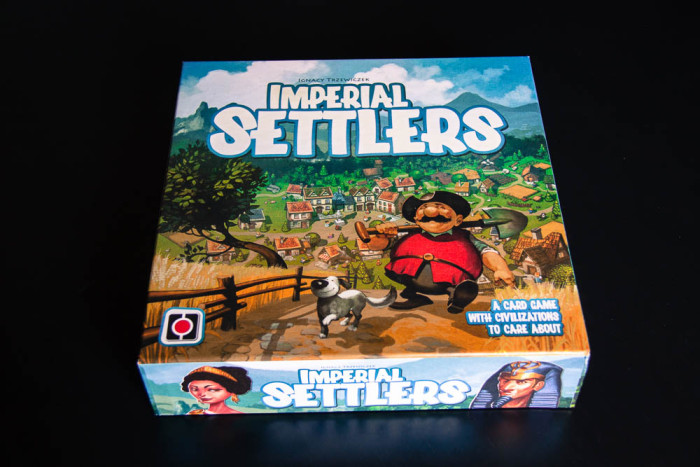 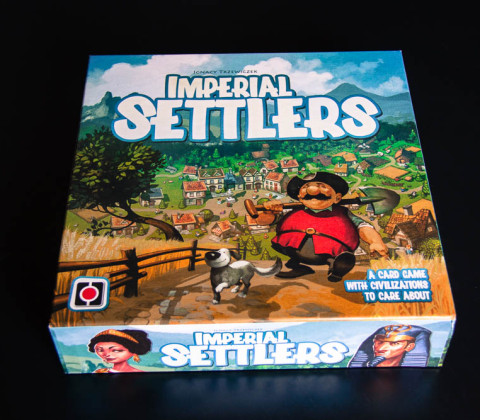 On September 4, 2015 by Artem Safarov With 0 Comments - Board Games, Review

Imperial Settlers from the accomplished polish designer Ignacy Trzewiczek is a game that has a lot going for it – high quality cutesy visuals, smart system of modeling an ancient civilization and a rewarding feeling of your plans coming to fruition. The game may seem to have universal appeal, however its true complexity becomes apparent by midway point and threatens to overwhelm the less experienced. It is a good game that knows its audience and doesn’t bother reaching beyond it. Grab a shovel and come along – let’s explore and take a closer look!

Two to four players compete as leaders of ancient civilizations sending settlers to a newly discovered land. Their outposts will grow and (hopefully) prosper as the players expand in search of resources and glory. Each player plays one of the four ancient civilizations presented (brownie points for reversible male/female leader portraits!). A vertical cardboard base forms a foundation from which your settlement will grow as you produce and spend resources (the usual fare of wood, stone, food, people and military). 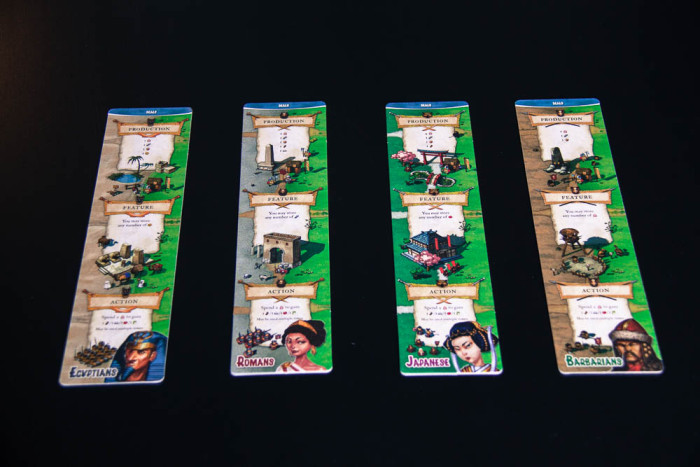 Each of the four civilization cards is double sided, featuring a male and female leader portrait.

The most important resource in the game and the true meat of Imperial Settlers are the location cards. These represent the different buildings that the players encounter and can be used in different ways – cheaper options (pillaging) allow you to sacrifice the cards while more expensive (building) allow you to add the cards to your empire, reaping long-term benefits.

Most actions in the game require a player to have resources and a game round goes until each players has depleted their resources. At the beginning of the new round every location in the empire produces more resources and the process is repeated for five rounds. Victory points (representing glory) are awarded for building locations and using specific buildings’ abilities – whoever scores most after five rounds is the winner.

There is also a workable solo variant that is rewarding, useful for learning the ropes and can be a fun “light” way to enjoy the game when you have no one to play with.

The game focuses in on building an economic engine – you are trying to use the resources you have to build up more ways to produce resources and then use these resources to produce victory points. There is a great variety of ways on how to go about it, but that’s the crux of the exercise.

Food, stone, wood, gold, swords and people – the resources that will pay for your civilization’s glory!

Note the “great variety”. There is truly a ton of options – each civilization gets a small deck of cards unique to them and can also access universal buildings available to everyone. The game starts of briskly enough as your production means are meek and first couple of turns is about maximizing what you can produce on a tight budget (hint – it’s not a lot). The turns go quickly, however all of that changes once your empire grows to even medium size.

With more options come additional considerations and analysis paralysis is not far behind. This is less noticeable with two players but with higher player counts the down time becomes an issue. It doesn’t help that the cards, while beautifully illustrated, have lots of tiny text. In my experience this led to players “losing” their strategy and having to re-locate the cards they wanted to use, provoking further delays. 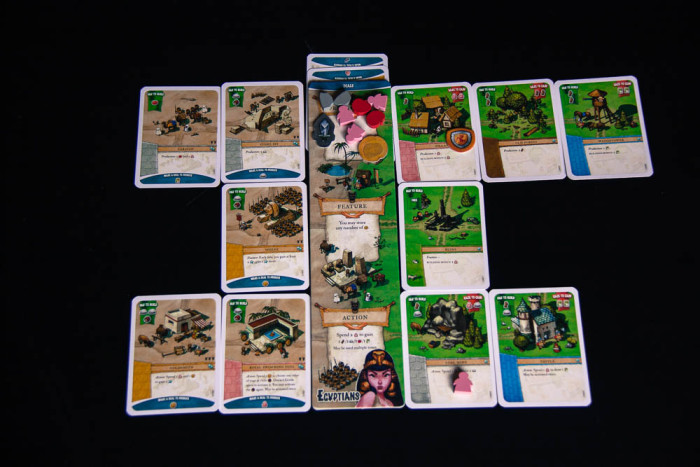 This will be much less of an issue for experienced gamers of course. The game’s adorable graphics and breezy start might make it seem like a good lighter option, whereas in reality Imperial Settlers is a decidedly medium offering, tipping slightly towards the heavier end of the spectrum.

With practice games do fit in the advertised 45-90 min playing time, however the game is a pretty intense exercise and does not leave you with the immediate desire to play again. The games tend to not be very social as there is little interaction outside of the occasional raid to take out an opponent’s key building. 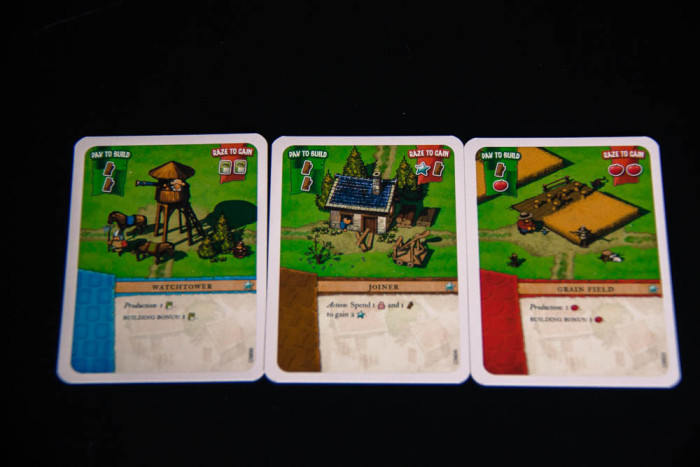 The quaint art on the cards will give you something to admire while you’re waiting for your turn.

The impressions of Imperial Settlers will vary greatly based on a player’s comfort with complexity. Experienced gamers thrive on the rich variety of options and are able to make quick decisions to keep games lively. Newer participants in my experience get bogged down by the choices, growing frustrated and not enjoying the game as much.

The game itself is very well-designed – the four factions each have a very unique playing style to it – the Barbarians are able to muster great hordes and threaten their neighbors while the Romans build efficient bureaucracies, obtaining multiple bonuses from related buildings. Seeing your empire grow in front of your eyes is satisfying (even though the table space does become an issue towards the end of the game). The different factions seem to be well-balanced and are all fun to play. 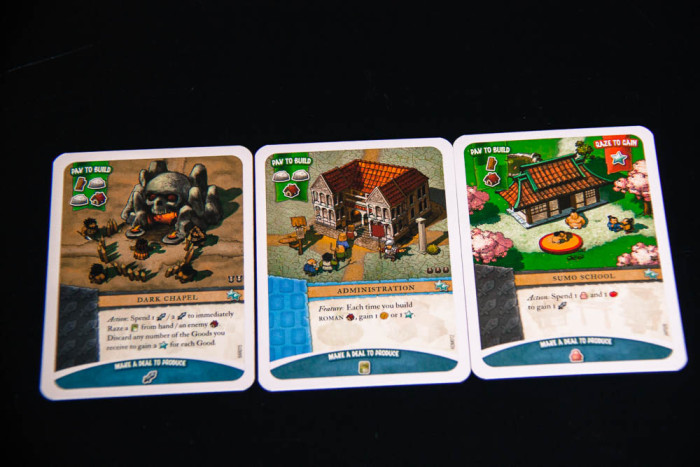 Each civilization’s unique cards have their own specific character and art style.

The game does suffer a bit in that an outcome can be determined in the first couple of turns. If one of the players is able to get a much stronger production going early on – catching up is hard and watching someone rack up the points while you flounder is not pleasant. Because the options available are semi-randomly determined – bad draws can lead to rare frustrating scenarios. Overall though, the luck factor is more enjoyable than bothersome – majority of the time you are in control as long as you can keep track of all your twenty buildings’ abilities.

Imperial Settlers is not for everyone, no matter how approachable it may look. Keep this away from your less experienced friends and the game’s complexity will not turn into a negative. For those who thrive on crafting intricate economic engines for maximum efficiency – Imperial Settlers will offer an engaging, chunky experience that will leave you wanting to play something lighter afterwards.

Board Games, Reviews
10х10 – A 2015 updateTokaido review: the joy of the journey