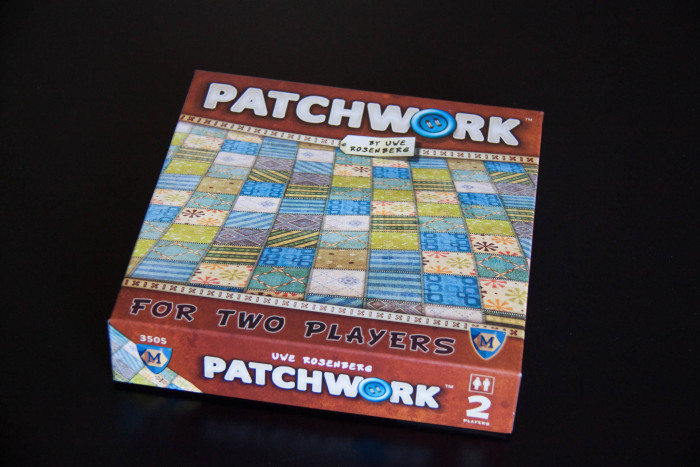 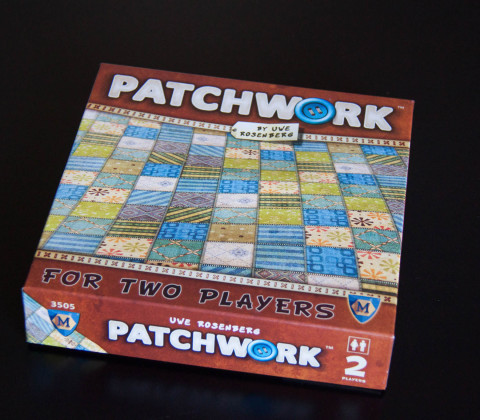 On December 8, 2015 by Artem Safarov With 1 Comments - Board Games, Review

Combining things effectively can be tough. Like fitting several eccentric shapes in a small square. Or mixing several mechanics in gameplay for a rewarding yet brisk experience. Underneath Patchwork’s cozy, appealing presentation, there is a great multitude of gears whirring into motion with each turn. The game does an exceptional job satisfying both those who just want to sew cutesy patches onto a blanket as well as those who want to dig deep into the gears to find out what makes this complex mechanism tick. So what makes this small box a must-own for a gaming couple?

You and your opponent (the game is strictly two-player) are competing at the high-stakes activity of quilting. Each of you starts with a blank 9×9 board that you need to fill, to the best of your ability, with patches, laid out in a circular pattern between players. The patches are reminiscent of Tetris pieces carrying the most tacky wallpaper patterns you can imagine. Each has two costs in time and buttons. (That is right, the game’ currency is buttons and saying “button income” for an unknown reason is utterly hilarious). The total time is limited for both players and is represented as slots on a track where both players’ pawns are marking their progress. Buy a patch, pay the price in buttons, and move your pawn up on the time track. Whoever is behind always gets to go (much like in Tokaido, another elegant design). Some patches grant you additional button income, granted at predefined points of the time track. 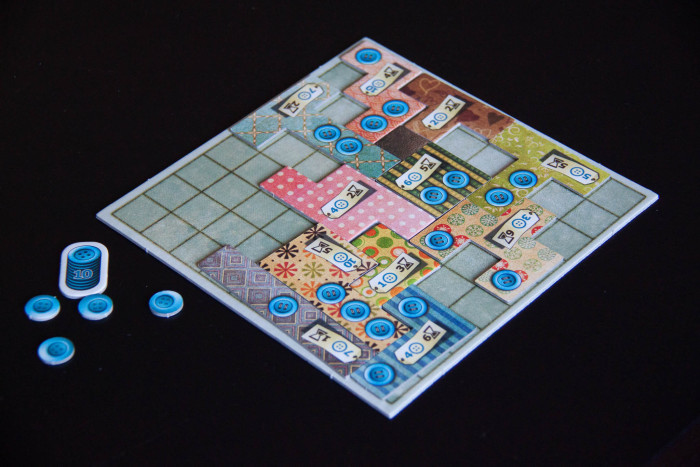 A mid-game quilt. Lots of holes to patch up!

The players take turn sewing on patches (or skipping their turn, effectively exchanging time for buttons) until they run out of time – at that time they are penalized for any empty spots on their quilt and whoever has the most buttons at the end is victorious.

Patchwork is a part of Uwe Rosenberg’s small-box two-player game series (2p versions of Agricola and Le Havre being the others). It is a breeze to learn, set up and play, as the rules are highly intuitive and the presentation inviting and clear. The games fit comfortably into a tight 20-min slot and both players remain engaged and entertained throughout. The decisions you are presented with are bite-sized (you have at most four options you could potentially choose your turn) and that keeps analysis paralysis at bay. It never overstays its welcome; on the contrary, it lends itself very well to repeated plays due to the brief playing time. 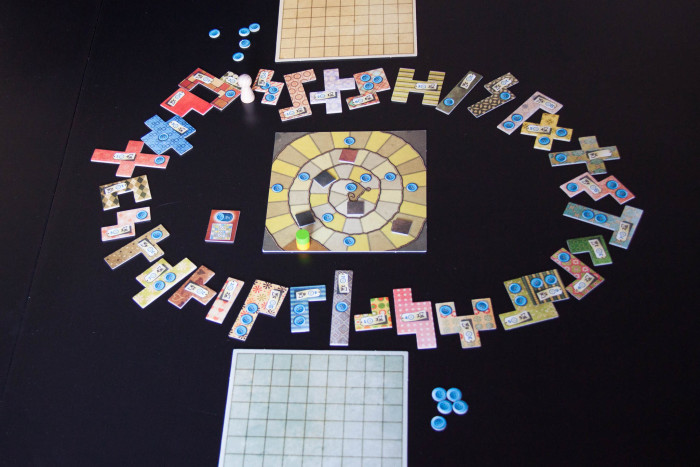 A game of Patchwork all set up. Ready, set, quilt!

The pre-defined player count allows it to focus on a very specific kind of a gaming experience and deliver it with excellence; however, this does limit the cases in which you can get it to the table.

It is easy to underestimate Patchwork for its simplicity. If you start thinking about it – there are several systems in play – you have a limited amount of time so you have to use it wisely. You have to know when to invest buttons and when to save up, including the timing of income points on the time track. You have to cover as much of your quilt in patches while making sure you are leaving yourself options for placing future ones. You can try to get the bonus points for completely covering a 7×7 square (giving you some leeway on your 9×9 board) or just focus on leaving as few blank spots as possible. Each decision that you make, while small, can potentially be weighed against three or four levels of consideration – do you go for an expensive small patch that will get you many buttons? Or a bigger weirdly-shaped piece that will cover a good area but will eat up a good chunk of your time? 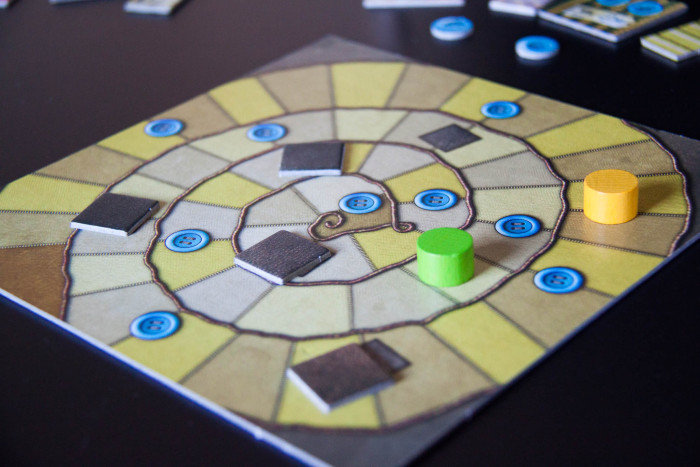 You only have a limited time to finish your quilt! Don’t waste it!

The absolute beauty of Patchwork is that you can think as hard (or not hard) about it as you want and still enjoy it. At no point do you feel overwhelmed, but if you do want to put in the extra effort – the game rewards you for it.

The same is true for player interaction – quilters willing to put in the extra effort can study which patches would most benefit their opponent and work to block those. Or you can not worry about it and just hum to yourself while satisfying your obsessive need to have a neat and tidy quilt with no gaping holes. At no point does the game feel cutthroat, however and it is a very pleasant experience overall. There is no luck factor whatsoever so the game produces a calm and confident feeling of being fully in charge of your own creation. 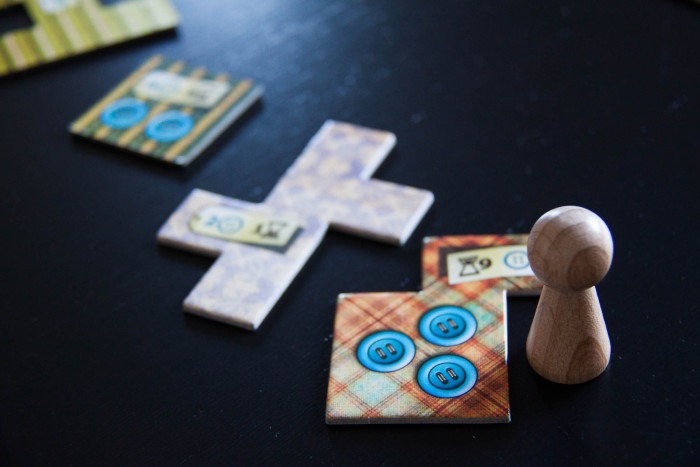 The many shapes and colours of the patches are waiting to be claimed.

If you have a regular gaming partner (most applicable to significant others) – I would suggest you put Patchwork on your “must own” list. It does not make anyone feel bad and instead invites people to enjoy it at the level where they are comfortable. Somehow, perhaps due to the tranquil theme, the losses never result in bruised egos (although your mileage may vary depending on personalities). A good way to engage those newer to the hobby and a rock-solid option to have for some impromptu weeknight gaming. Highly recommended.