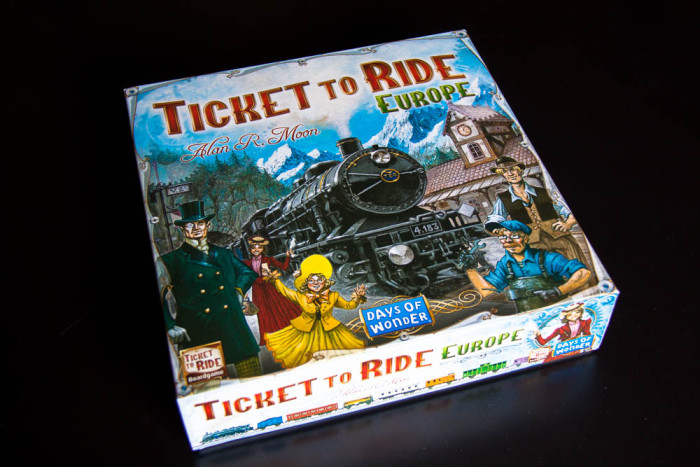 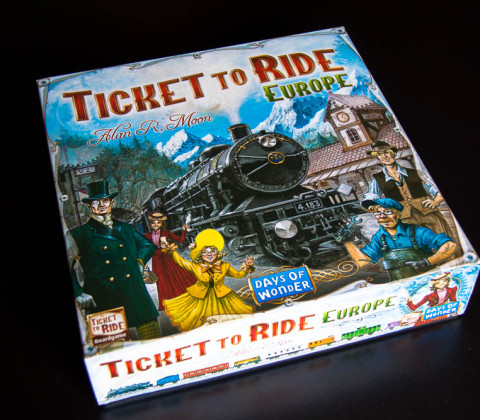 After the phenomenal success of the 2004 Ticket to Ride, expansions were all but guaranteed. Days of Wonder did not disappoint, producing Ticket to Ride: Europe in 2005. The game carefully maintains all the light appealing gameplay that made the original so popular while adding component upgrades and a few new mechanics to keep things fresh. While not all additions are welcome the overall game, combined with an exciting new map is a definite improvement and sure to extend the enjoyment you get out of the railroad laying competition.

It’s worth saying that the heart of Ticket to Ride is very much preserved – you have a map with major cities connected by railroad tracks. Claiming each track requires discarding colour-matching cards, allowing you to place your train cars on the route. Routes bring you points and help you complete your “tickets” – assignments of connecting two specific cities. Set collection and a choice between building up resources and being first to claim routes are still the major parts of the game. At the end of the games the tickets you complete bring you extra points and the incomplete ones detract from your score. Days of Wonder did not see a need to mess with success and the core structure of the game remains unchanged. 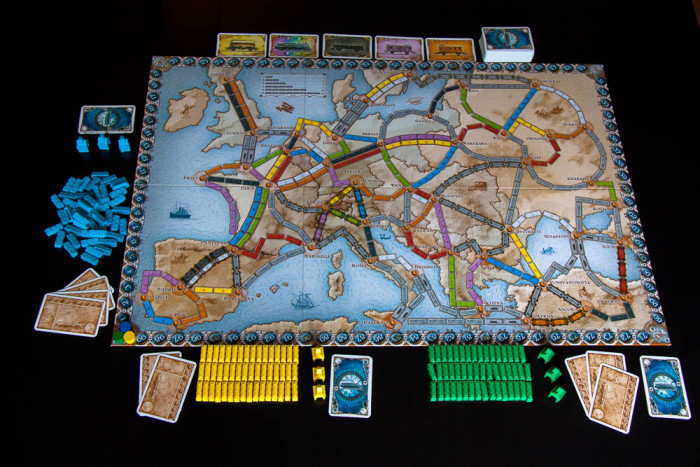 A game of Ticket to Ride: Europ set up for three players. Blue is messy.

The game accommodates 2-5 players just as the original and its’ duration remains unchanged providing an experience that’s light but substantial in terms of time. It still says 30-60 minutes on the box but from experience 60-90 is more like it.

What does change is the map. You are now laying tracks under the mountains of France and across the fields of Ukraine – from the Baltic Sea in the north to the Black Sea in the south. The map is appealing, functional and as useful in brushing up on your geography as ever. In an interesting decision the names of all cities presented not in their anglicized version but the way these appear in the corresponding language. So you will have Wien instead of Vienna and København instead of Copenhagen. It is an interesting decision and adds flavour, though it does take a bit of getting used to.

The cards depicting different types of train cars receive an upgrade – these are now poker-sized – an increase from the mini-sized cars of the original game. The change is welcome as the bigger cards are easier to handle and add clarity, though it does increase the game’s footprint by a tiny bit. 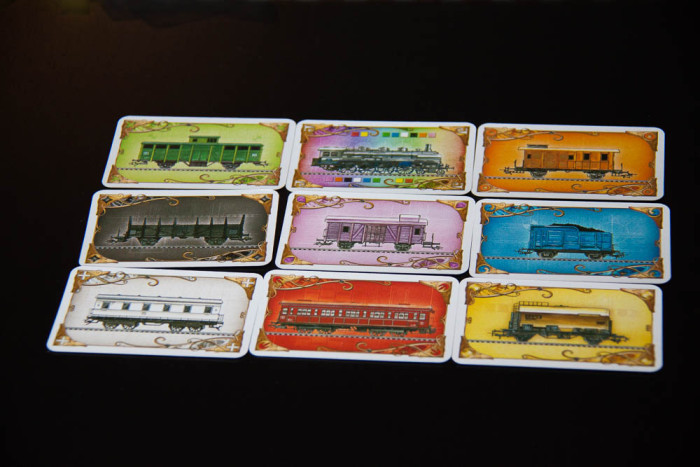 Trains every colour of the rainbow!

The tickets are now of two types – normal and long. Every player starts a game with a single long ticket that requires a connection of two far away cities and is worth a significant number of points. This gives players a long-term mission to work towards as the completion of this long route is likely to take up the majority of the game.

Three new additions are featured in the game rules themselves. First and most welcome, Days of Wonder added a new physical component in stations – small plastic buildings to be placed on the map. Placing one into a city requires discarding a small number of matching cards and it allows you to use another players’ route originating from the city as your own. All unused stations are worth points at the end of the game. The change is awesome in that it opens up lots of new possibilities and avoids frustrating situations where you were blocked from completing a ticket because all routes were already taken. Sure, there is a cost to using these but it is a change that significantly improves the playing experience and is very enabling. 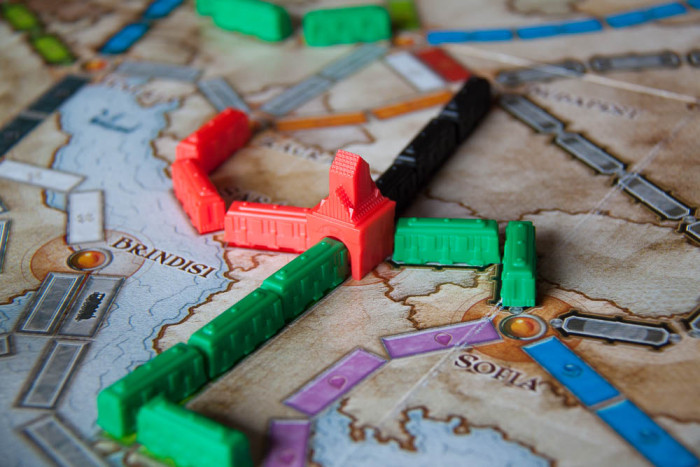 The stations both provide a neat new mechanic and fit perfectly with the existing pieces.

Another change is ferries – certain routes (going over water) have a requirement that at least one (or more, depending on the route) cards you play be a wildcard locomotive. This is a light but interesting addition, forcing players to really hunt for those wild cards and making it more appealing to use a double action to take a face-up one. Overall it has a very small impact but is a welcome quirk nevertheless.

And then there are tunnels. Certain routes (one’s going under mountains) might require you to use more cards than the route normally requires. A player picks up three top cards and if any of those correspond to the colour of cards that were played to claim the route – the player has to use an additional number of cards equal to the number of matches. If the player doesn’t have additional cards, their turn is cancelled. This change is intended to add tension and a bit of risk management to the game but what it ends up doing is the opposite of what the stations accomplish – it prevents you from enjoying the game by erecting artificial obstacles in your way. Those looking for a challenge might welcome this change, but for TtR’s key audience of casual gamers – I think this is not a good addition. 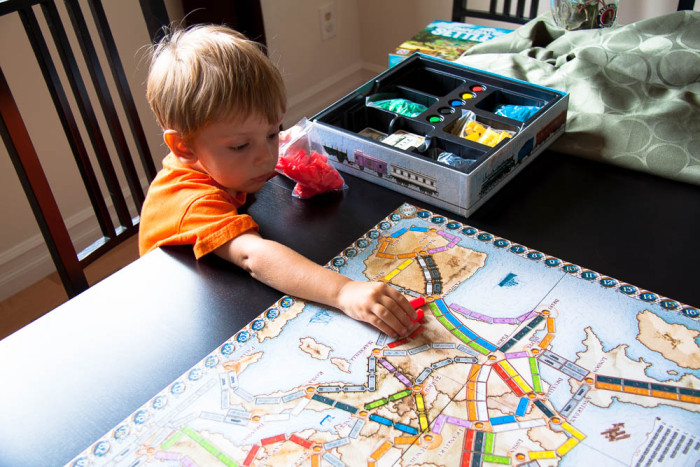 While the game might be outside of the younger players’ grasp – they can still have fun with the little trains!

Ticket to Ride: Europe is a definite (but small) improvement over its classic predecessor. It works equally well as a standalone game for those who have never played another TtR and as a small next step for those who got a little tired of the original. It is not a complicated game and one where luck plays a significant role so it’s unlikely to be a centrepiece of your gaming night, but it will work great for families as well as a side attraction for the more experienced crowd. The theme is as effective and appealing as ever. That being said – if you own and occasionally enjoy the original there is really no rush for you to get your hands on this particular version.

The component upgrades improve the experience, majority of rule tweaks enhance the game and the map is good at subtly teaching geography. I would suggest to skip the original and to go straight to this one for most gamers. Just ignore the tunnels and you’ll be chugging along in no time!

Board Games, Reviews
Patchwork review: elegance in simplicity10х10 – A 2015 update