In space no one can hear you scream. Not that the Space Marines scream, you understand. Genetically engineered and unquestionably loyal to the Emperor of the Warhammer 40K universe, these fighting machines fight and die with zeal and fervor – no regrets, no remorse type of an affair. A small squad of these heavily armoured warriors armed with chainswords, flamethrowers and psionic powers is deployed to a Space Hulk – a remnant of a ship floating through space. Heavy infestation of alien zerg-like Genestealers is reported. Your marines will have to move carefully through the claustrophobic corridors of the ruin, blasting aliens and most likely dying in the process to get to the final location that will contain the ultimate goal of your mission – an alien lair, a delayed self-destruction activation and the like. The game pegs your success chances at about 44%. Sound good? For the Emperor!

Space Hulk: Death Angel is a light/medium cooperative card game for 1-6 players of 12 and up that plays anywhere between 20-45 min. It is published by Fantasy Flight Games so you know it will look great and the rulebook will confuse you to no end before you get how to play.

Each player controls 1-3 squads of 2 marines (number of squads controlled will depend on # of players – e.g. in a 4-player game each player gets only one squad while in a solo game you will have 3 squads). Laying out these marine cards in a vertical pattern creates your battle formation – it serves as a spatial basis for the game, as terrain elements and aliens pop up to the sides of your column. 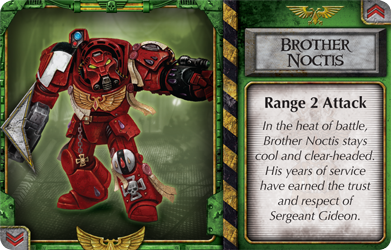 Meet Brother Noctis – He is clear, cool-headed and likes mojitos.

After the aliens spawn (likely accompanied by an ugly side effect that makes things harder for you) – your marines may react either supporting others, moving and interacting with environment or everyone’s favourite option – blasting things to pieces using advanced future weaponry. An elegant rule limitation prevents you from doing the same thing you did last turn, so you can’t just keep shooting, forcing you to vary your tactics. Each squad (base game comes with 6) has some sort of special ability associated with each of its three actions – so for example the fellow with the flamethrower will be able to target a whole group of aliens instead of just one, the marine with the chainsword will be able to slice up attacking aliens while supporting others and the psionic Lexicanum will be able to trap aliens in a forcefield.

You can also “activate” terrain pieces like doors, levers or fuel tanks locking aliens away, getting a temporary boost or destroying a large group (also risking your own life naturally). This provides welcome variety as “spray and pray” is not always the most effective tactic. All attacks are resolved by a single die roll and have a base 50/50 chance of success. “Support tokens” received through others helping you and auxiliary game effects allow you to reroll these as well as defense rolls.

Defense? That’s right, if any aliens survive your turn phase they attack, trying their darnedest to chomp through your marines’ armour. Surprisingly, their chances are pretty good – even a single alien has a 1/3 chance to slay a marine. More aliens – more chances for a lethal outcome. If your marine anticipates the attack (is facing the right way) – support tokens (mentioned above) can be used to reroll potentially lethal results. But you’re always short on these and that die can be truly cruel, especially since it goes not 1-6, but 0-5 for that added difficulty :).

This sequence repeats until you clear out all of the aliens on the current location and then you travel to the next one. Each game features 4-5 stages that you have to get through in order to win. If you survive until the last stage and are able to fulfill the win condition – you are victorious!

Not that you have to worry about it too much though. This game is HARD. Wait, not hard, Robinson Crusoe is hard. This is unforgivingly brutal, especially after you realize just how easily your marines become Genestealer chow. The game throws many nasty surprises at you and you will fail. A lot. My personal win rate currently stands at 10% and after I finally got that win I’m kind of hesitant to approach it again. As the named marines fall one after another you feel a bit of a helpless frustration – was there something you could have done to save Brother Claudio or are you just a terrible die-roller?

Space Hulk: Death Angel in play – only three marines out of six have survived

In this unforgiving difficulty lies the nature of the game. On one hand it provides for a definite challenge. You will not win this game on first or second try. It will definitely make you work for your wins. But you will experience a certain level of frustration over your poor dice rolling that leads to defeats. Luck plays a significant role and no matter how much you plan and strategize – sometimes you’ll need a clutch roll. This will not sit well with some people.

However, the brutal and sudden mortality of your marines goes very well with WH40K feel – they are both ****** and vulnerable at once. Their trek through the tunnels relayed to you via the palpable claustrophobic sense of impending danger that you feel for every new alien spawn you draw. Every success is greeted with a fist pump. A win is an event to celebrate. These aliens are not your usual mooks – the danger they emanate is real and the feeling of accomplishment you get for winning is way more than anything I got out of Pandemic.

The game is basically a solitaire re-purposed for multiplayer though. The best experience I had was playing solo and introducing artificial intrigue for several players does not work. You’re supposed to discuss what you’re going to do but not spell it out exactly – confusing? yes! More players just dilute the planning and it’s very prone to quarterbacking as experienced veterans can easily become over-controlling of newbies’ characters.

It is, however a great solo game and very compact – perfect for travel. If you want a solo experience with a lot of challenge – this is a game for you. For a more light-hearted (actually having a chance to succeed!) experience – seek elsewhere. If you are averse to dice deciding your fate – this vessel is also not for you. Fans of WH40K will not be disappointed with appropriate atmosphere and flavour text. Those looking for a meatier experience can try the full version of this – minis and everything, although the brief duration of this one is a definite strong point.

Because this game is somewhat polarizing I can’t give it too high of a score but because it does what it does really well – I can’t go too low as well. Know what you’re getting into, be ready for glorious death and eventually triumph will be yours.