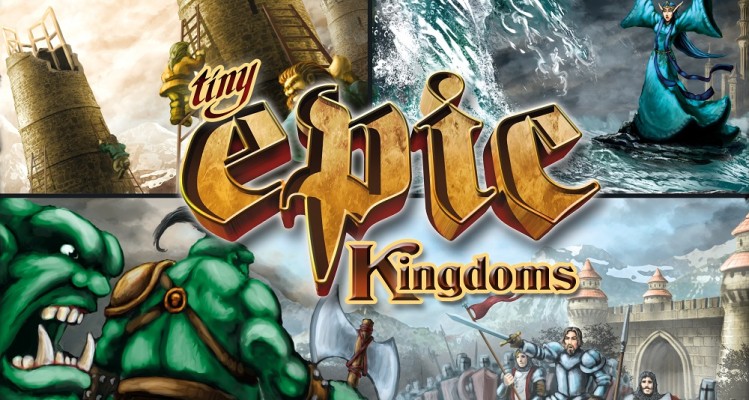 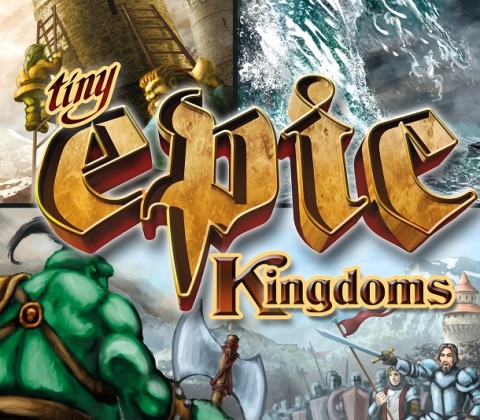 On January 16, 2015 by Artem Safarov With 0 Comments - Board Games, Kickstarter, Review

Can something tiny truly be epic? This postcard-sized box stakes a claim that yest it can. And boy, does it deliver on that promise. Scott Almes, the designer, managed to pull off a magic trick of his own, creating a game that lasts less than an hour, takes minimal table space, yet feels robust and involved, packs tactical depth and flexibility. After the dust settles and the victor is crowned – it is a very satisfying and complete experience in a familiar, well-rendered fantasy world.

Each player represents a fantasy kingdom, populated by a race of creatures vying for supremacy in the region. Each fraction starts off on a terrain tile, containing five regions. Fraction’s population is represented by small (and therefore adorable) meeples placed in regions.

There are three resources – food, magic and iron – the amount of these you have is represented by kind of a slider mechanic where the location of a tiny (and therefore even more adorable) wooden token indicates how much of a resource you have. 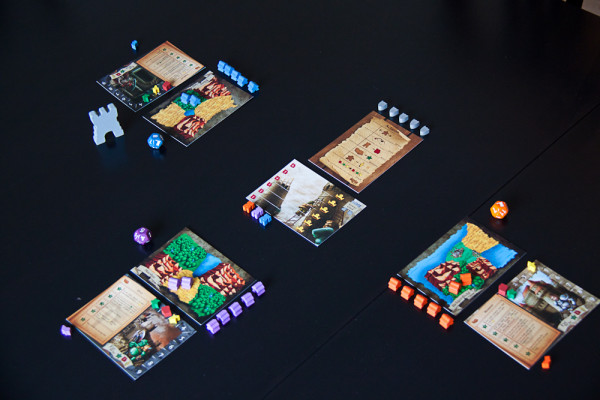 A three-player game of Tiny Epic Kingdoms ready to re-enact Warcraft (Orcs vs. Humans vs. Undead)

Every turn, the active player may take one of the available six actions – you could either spend resources to grow your emprire, research magic, or build up a wondrous Tower, trade resources for one another or move your meeples around. The amazing thing about Tiny Epic Kingdoms is that each turn is shared by all players – the starting player only determines what kind of action is taken.

Other players may either do the same action or forego that opportunity to collect resources, receiving these from regions occupied by their meeples.

Movement of meeples can take them from one terrain card to another – when two meeple share a region, a war takes place. The ingenious battle mechanic sees two combatants secretly commit resources to the battle, indicating the amount using a die (dice are not actually rolled). The amounts are revealed and the victorious player gets to keep control of the region. Commit too little and you risk a defeat. Commit too many resources and your reserves are depleted, opening you up for a potential costly counter attack. Or, if you’re feeling diplomatic – forge an alliance so that both you and your opponent can collect the resources from any given region. Or, you know, pretend that you’re going for peace and fund a war effort anyways. You can always say it was independent militants and you had nothing to do with it. 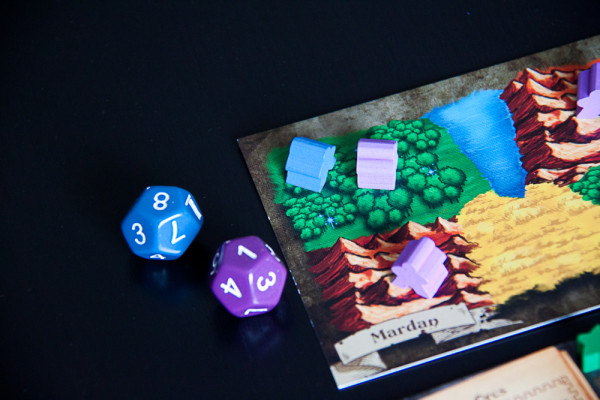 The invading Undead force handily drives the Orcs from the forest.

Building a tower, growing your population and researching magic ultimately grant you victory points. Magic, in addition to victory points also introduces unique race-specific bonuses as you achieve arcane mastery. Once a player reaches a threshold in any of these three areas, the game is over and the player with the most victory points, shockingly, is crowned winner. 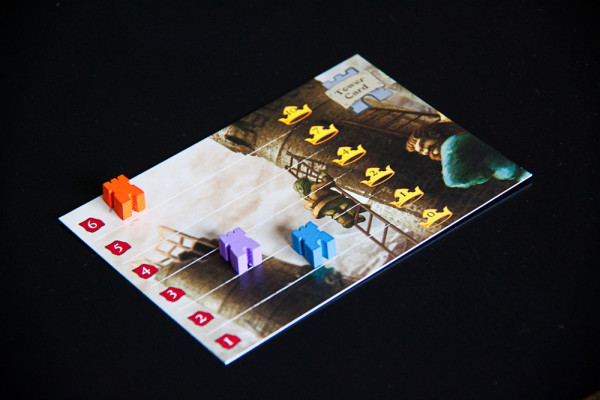 While the Orcs and Undead have been busy battling each other, Humans built up a wondrous Tower.

Once the tiny components are laid out and you place your tower and spellbook markers down on appropriate cards, the game commences. The fact that every player gets to do something on every turn minimizes down time and keeps everyone constantly engaged. It is practically always your turn, which feels great.

The game works with two to five players, excelling, as expected, at middle ranges of 3-4. The games last a little over the advertised 30-min duration, but never feel like dragging out. Increased comfort with the game’s rules and decision making also speeds things up.

The game offers an incredible flexibility, in the amount of conflict players want to have. It is perfectly possible to go through an entire game without a single battle as competitors are seeking to utilize resources most efficiently. On another hand, the combat mechanic is extremely smart and simple and not using it narrows the game experience somewhat. Those looking for a lot of confrontation can certainly find it, though funding frequent war efforts is not a cheap endeavor and this might set a fraction back. 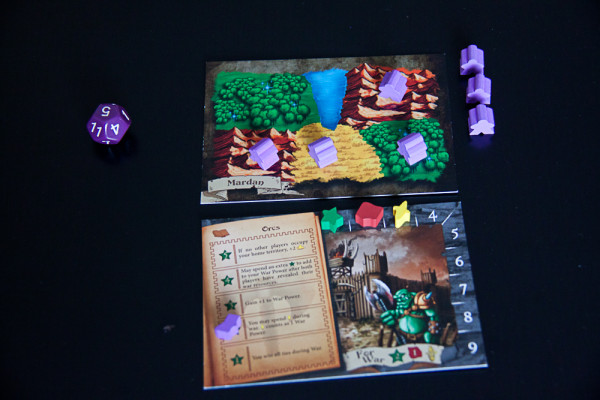 Player’s area – the hills of Mardan are swarming with Orcs.

The race that you play also makes every game that you play a little different, nudging you towards a strategy that would be most effective. The Dwarves, as expected, are master builders, while Orcs excel at warfare. Thirteen races included in the base edition of the game offer a good variety. The fact that there also many different terrain cards adds replayability. While the variety is excellent given the simple mechanics of the game, it is not endless and playing this game too much may stretch it beyond it’s impressive limits.

The game leaves you truly amazed at the scope of what it is able to represent with these tiny tokens and a few cards. You genuinely feel as if you are orchestrating a rise of a fantasy kingdom and seeing your meeples spread over the mountains, fields and forests is deeply satisfying.

The decision making is split between long-term planning and adapting to what your opponents are doing. The decision on when to collect resources is always a hard one as you are constantly weighting your ability to do things that score victory points with having enough resources to do so. On top of all that you are always on the look out for potential conflict, having to keep a reserve in case some of your neighbors get too uppity. That’s quite a lot to consider and to give you plenty of space to strategize.

The game rules are not complex, yet there is a lot going on and I would not recommend it as an introductory offering – its’ beauty is in its’ surprising depth. The Magic advancement also introduces quite a bit of factors to keep in mind, fleshing out a robust base system. Speaking of fractions, these feel slightly off balance as some of the fraction powers appear more or less powerful. I do not have large enough sample size to make conclusive assertions, but the feeling of precise balance is certainly absent. 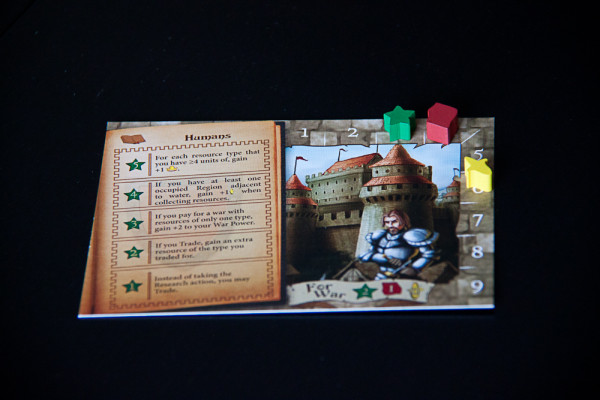 The tiny magic, food and iron markers serve as sliders indicating how much of each you have.

The combat system, with its one-decision approach manages to be magnificent in how many factors go into that one single number you decide on. Really, I can’t say enough on how elegant and involved it is, you just need to experience it.

It is tricky to recommend a best way to play this game. On one hand it certainly lends itself well to multiple plays – it is relatively short, every game is different due to mix of races and terrain cards, you can try multiple strategies. However playing it too much can leave you burnt out and emerging patterns of play may expose the replayability limits.

I would highly recommend Tiny Epic Kingdoms to intermediate and expert gamers who are looking for an affordable, compact, smart and varied game to supplement (but not lead) their game nights. Especially so if you are a fan of fantasy kingdom building games such as Master of Magic or Age of Wonders. Do not overplay this tiny gem and it will provide you lots of interactive, engaging entertainment.

The creators of Tiny Epic Kingdoms are running a Kickstarter for a new game in the Tiny Epic series – Tiny Epic Galaxies. The Kickstarter blasted through most of its’ goals – so if you are looking for an exciting campaign to be a part of – I highly suggest you consider backing it.

Board Games, Kickstarter, Review
Sushi Go review: a treat of a gameTop 5 Games of 2014