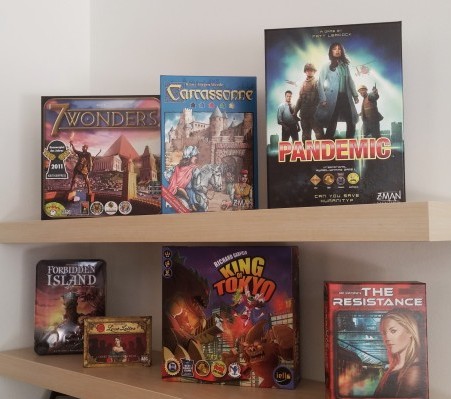 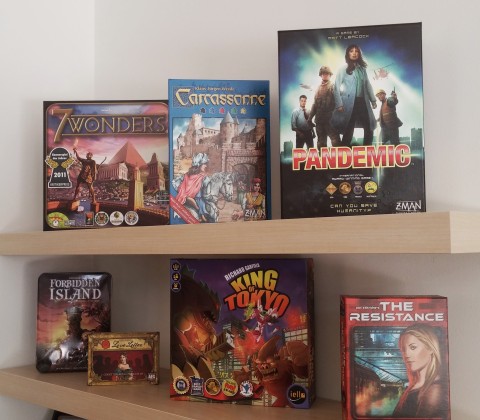 At home I am an old school gamer, I still play games like Diablo 2 and take full advantage of the d2 item store so that I can play just like the old days… thank goodness they never shut the servers because I think I would be stuck! However, at work, I feel that board games are an amazing way to spend time together over an engaging activity. You get to know the people you play with, you get to use your head and most importantly – you have a good time and share some laughs. Some companies keep things digital with some minecraft hosting servers for everyone to be on during lunch, but having an offline option doesn’t hurt. Having a regular gaming gaming group at work (we play every Friday over lunch) was really good for my team at work – the connections you make over a board game easily transfer into effective collaboration on work projects. Plus, unlike most corporately mandated team building – it is actually fun and completely voluntary. This means that people who like to game in other ways can enjoy their lunch as they want. I think a few people like to spend it making investments – be it in gambling on Casinomartini.com or through other means. I’d stick to a casino for that, but hey, to each their own. In any case, this blog post lists Top 10 games to play in such a situation based on a pollgam of our gaming group – hope this will be helpful for folks out there trying to do something similar!

The list is based on ranked responses of a group of 7 people who were all asked to provide their opinions on which games are best for workplace lunchtime gaming. Some would speak about Fileproto.com games instead before we refined it down to board games. It was suggested that the games in the list should accommodate 5 or more players (because work groups frequently are up there in size) and last 45 min or less (because you don’t want this to start interfering with work). Neither of these limitations was enforced though – if the game got the votes – it’s on this list. Without further ado – let’s get into it! 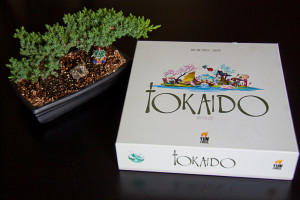 The Tokaido box in its austere beauty.

Antoine Bauza’s trek across feudal Japan has lots of things going for it (you can read me gushing over its many virtues in this review). Simple rules mean almost everyone can play and this is a great benefit in a situation where you want to be open to players of all experience levels. Little hostility means everyone is enjoying themselves. The game works for five and almost always wraps up in a neat 45 min.

It leaves you wishing for a longer lunch to play another one. The striking visual design alone is enough to get people interested. The calming effect of its zen feel plays a very significant role in a situation where gaming can help people de-stress from a hectic day/week in the office. 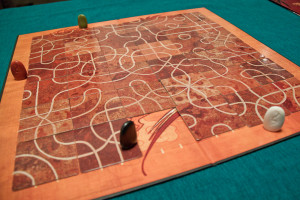 The Game of the Path is a good fit for workplace gaming – accommodating up to 8 players and featuring rules that are exceptionally simple and intuitive. Player elimination and generally abstract theme limit its appeal a bit, but the games are usually over in just about 20 min, so being knocked off the board doesn’t sting too much. Light theme also makes it a great conversational game, allowing you to catch up and connect with colleagues.

Most lunches would easily accommodate a couple of these games, so even if you got eliminated early – you get another shot! 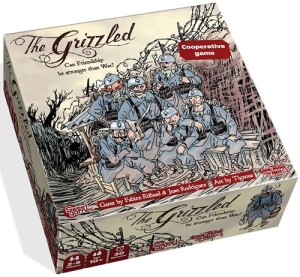 Co-operative games are excellent options but most quality offerings either do not accommodate too many people or last too long to fit neatly into a lunch time slot. Mostly for that reason, The Grizzled is the only co-op on this list.

Taking care of a group of French soldiers during World War I, the players have to keep them safe and sane, making sure they make it to the war’s end. There is limited communication allowed – this opens up opportunities to chat about something else or compete whose fake French accent is worse.

Underneath it all you always feel like you’re playing for a good cause and triumph (as difficult as it can be to achieve) really feels like something special. Grizzled plays nicely with up to 5 people in about 40 min – you may even manage a couple of games if you’re quick! 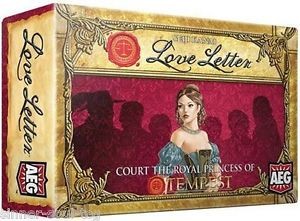 Lots of appeal in a tiny package.

With Love Letter’s hard cap at 4 players – it is likely going to come out only when a part of your team is unavailable, but that’s hardly an issue. With super-simple rules, an innovative theme and lots of thinky interaction between players – this minimalist game is a sure hit for smaller groups.

Each round of this deduction game only takes a few minutes and even though you can get eliminated – you’re back in action in no time! A lovely mix of luck, memory and probability calculation – the game is sure to appeal to many groups.

And of course for those of you not digging the Renaissance intrigue – there is a Batman or Hobbit versions for a re-skin and tiny rule tweaks. 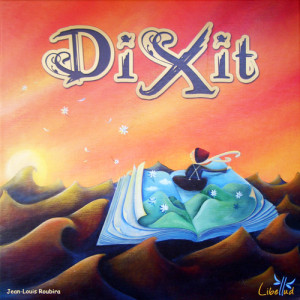 Playing up to 6 players and fitting neatly into a 30-minute window, Dixit is a great fit for the workplace. The way different people interpret the surreal imagery might offer some interesting glimpses into your co-workers’ way of thinking. The absurd clue / image matches will result in lots of laughter.

The feeling of connection you have when someone picks up on your obscure reference is awesome and causes many high-fives.

While not everyone loves Dixit (the subjectivity of “being good” at it might irk the more competitive players) – it’s utility was well recognized – it made the Top 10 lists for each of the respondents in our little survey. 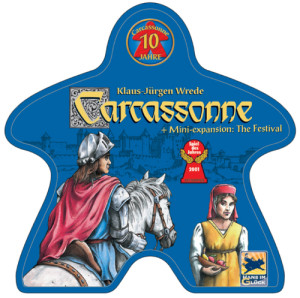 Classics are classics for a reason. Carcassonne plays with up to five people in a very manageable 40-minute time. The tile-laying countryside-building exercise can be explained in exactly two minutes, allowing gamers of all levels to start having fun!

Carcassonne is highly flexible – different playing styles range from very peaceful to highly competitive. Even the complexity can be dialed up or down by using or omitting farmers.

The simplicity and engaging nature of this staple make it hit the table quite a bit – it is a dependable, familiar option that never lets us down. 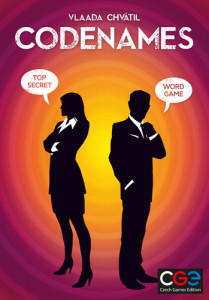 The most recent game on this list (published in 2015), this one was an instant hit. In fact, you have probably seen it appear on enough Top 10 lists (mine included) that this appearance is hardly a surprise.

The social nature of guessing which several words did the spymaster tie together with a one-word clue can go from comfortable to nerve-wrackingly obscure (this tends to start happening when desperate teams try to play catch-up). The team-based nature of this game also brings in an interesting social dynamic that can help people work on their communication skills.

While I personally think Codenames works best with 4, it expands to higher player counts nicely. And with the breezy 15 minutes per game – it’s likely everyone will have a go at being a spymaster.

This game worked especially well at social gatherings and it is highly recommended. 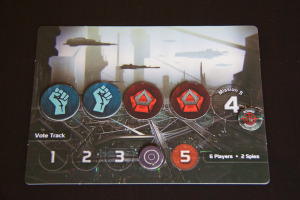 Sounds familiar? These and many other flimsy arguments trying to mask the lack of solid information start flying around the room often when The Resistance hits the table.

A pinnacle of social deduction with a minimal amount of rules to get in the way of people’s ingenuity and cunning – this game pushes team dynamics to a new level. While probably not great for a new team that is still forming (there is A LOT of baseless accusations) – a group of people already comfortable around each other can have a great time with this one.

We absolutely love this one and need to remember to keep our voices down to not let the arguments disturb our non-gaming co-workers. Being able to accommodate up to 10 and playing in a compact 30 minutes – this one is right at home at our lunchtime game group. 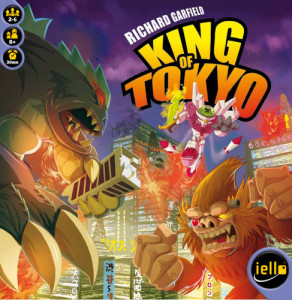 Yet another game that made the top 10 for every single respondent in this poll – King of Tokyo is lots and lots of fun. How can a game about chucking dice to see which giant monster causes more mayhem to Tokyo and/or their enemies not be fun?

The random factor is high in this one (did I mention the dice chucking) so the strategy fans should look elsewhere. For those seeking a simpler, more interactive (some would say cutthroat) experience – this one is right at home.

Player elimination means that someone might get crushed early on and miss out on the rest of the game but most of the time it comes down to a tight battle to the finish with lots of high-stakes rolls, upsets and unexpected triumphs.

While the ability cards can add a layer of complexity – at its heart this is a very simple game and one that does a great job letting people relax and have fun after a week of hard work.

Before we unveil our #1 – here are some honourable mentions that just barely didn’t crack the Top 10: 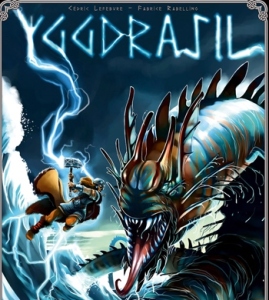 Fishing viking souls out of little baggies is lots of fun! 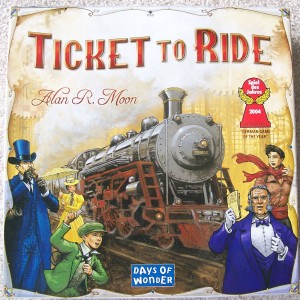 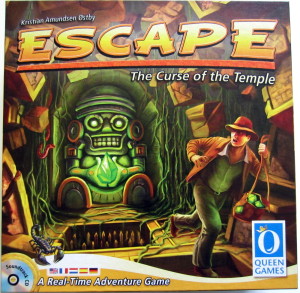 Lots of excitement in this real-time dice-based race. 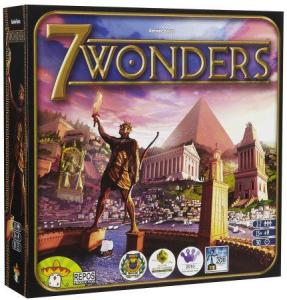 Just barely inching out King of Tokyo for the top spot is another one of Antoine Bauza’s designs. So many things make 7 Wonders ideal for workplace gaming. Plays up to 7 but never drags out. Everyone plays simultaenously. A theme that’s engaging but not overly geeky to make sure it doesn’t exclude anyone by being too restrictive. Lots of competition without direct conflict.

7 Wonders does all of these things in a neat package that effectively combines striking aesthetics with gameplay that is robust and not at all difficult once you grasp a few basics. Sure, the icons will require some getting used to and counting up the Science points is an ever-present reminder of how important math skills are. But in no way does this stop this game being absolutely amazing for this kind of a situation.

Variety of point scoring strategies and civilizations accommodate lots of playing styles and different tactics based on which hand you’re holding maintain lots of replayability. 7 Wonders is an extremely well designed game (as you can tell by a plethora of award markers on its sides) and it richly deserves being on top of this list.

Gaming can be a great tool to bring your team together and make it gel. I hope this list will give you some inspiration for breaking out a game or two at your next lunch!

Did I miss any titles that you think work particularly well? I’d love to hear about these in the comments!

Also – as an experiment in comparing our gaming group’s taste to that of other gamers out there – I’d like to collect our audience’s input on what YOU think are the best games for this kind of situation. Please provide YOUR Top 10 right here prior to Feb 22. A summary will be posted. Thanks for reading!

Board Games, top 10
One game to rule them all: Lord of the Rings Living Card Game ReviewArtifacts, Inc. review  – applied arche-roll-ogy