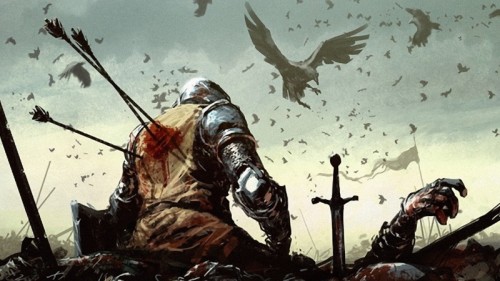 Why Must My Hero Die?

Note that this post on character mortality contains heavy spoilers and should not be read by anyone who is not completely caught up on the Game of Thrones TV Show. Awesome battlefield image courtesy of http://www.wallsave.com/.

Ask anyone who follows the Game of Thrones on TV – What were the most memorable moments from the show? The answer will undoubtedly be “The death of Ned Stark”, “The Red Wedding”, “The death of Joffrey”.

Why is it that we are drawn to the concept of important characters’ demise? Most of Shakespeare’s masterpieces and classic novels embrace character death. Love story of Romeo and Juliet – both are dead. Anna Karenina- dead through ignorance of basic rail safety. Achilles’s unhealthy obsession with sandals killed him. Even in the New Testament the main guy gets crucified. Historically, we seem to love the concept. Killing off protagonists in a heroic fashion can be hard to take but it propels them to martyrdom. However, life can be dark and depressing as is without us having to watch our favourite heroes die left right and centre. For the people in the USA, The Great Depression and WW2 were quite significant downers. Society needed a positive tune, a picture of a better life. In my opinion that was the cause for a spike of Happy Endings Tinseltown was shoving down our throats.

Is “happy ending” a modern invention? It is not. Fairy tales like these from brothers Grimm often ended with triumphant weddings, good guys winning and in most cases evil completely obliterated. But those were tales for kids, made up stories of fancy and wonder. Hollywood vigorously spammed us with “happy endings” for decades since the 30’s. The formula; “no matter how bad things look, everything will be all right at the end” became too predictable, too cheesy and eventually stopped provoking any emotions from the viewer. Why should anyone care about a messy situation John McClane got himself into if we know for a fact he will get out safe and sound, rescuing his son, daughter, wife, pet iguana and everybody else in the universe practically unscratched.
It gets worse in comic book universes where dying heroes often have a luxury of getting brought back to life. In the novel by Roger Stern; Death and Life Of Superman, Superman gets killed only to immediately be brought back to life. The perpetual “undying” of heroes (and villains) through magic, cloning, time travel, superfriends rescue from pits of hell, whatever the case may be is not as exciting as a hero’s permanent descend to the otherside.

Is death of is too extreme for your taste? Why not go for physical disfigurement? Any severe, permanent damage or mutilation to the main character carries an impact and can be used as a storytelling point, without removing the character completely from the story via the Grim Reaper. Loss of a limb shows the viewer (or reader) that a character (human at least) experienced a point of no return, made a sacrifice, paid the price, and faced the consequences. How can you not feel love for Luke Skywalker when his own (spoiler alert) father cuts his hand off? It’s a tragic event that cannot be undone (unless of course a severed limb gets replaced with a chainsaw or a machine gun or an identical robotic prostatic!). Luke was a good guy in his story, would the viewer sympathise if mutilation was brought onto the bad guy? Does a disfigured villain becomes less villainous and warms the hearts of viewers? Game of Thrones’s Jaime Lannister became a lot more likable shortly after he lost his hand. We can’t help but to feel sorry for Theon Greyjoy after he is deprived off his manhood. Makes me wonder if Jofffrey lost a limb, would the viewer forgive his heinous crimes? Probably not (definitely not).

In conclusion, I would like to encourage writers, directors and storytellers not to shy away to slaughter and dismember your pivotal characters . This would show the view (or reader) how truly “human” the made up character really was. Ned Stark can always return in a form of a flashback, a dream or a ghost. Ghost Ned Stark is definitely something Game of Thrones needs.

Theory, TV
Ticket to Ride review: All aboard the Board Gaming 101!Healing, damage and role of combat in RPGs